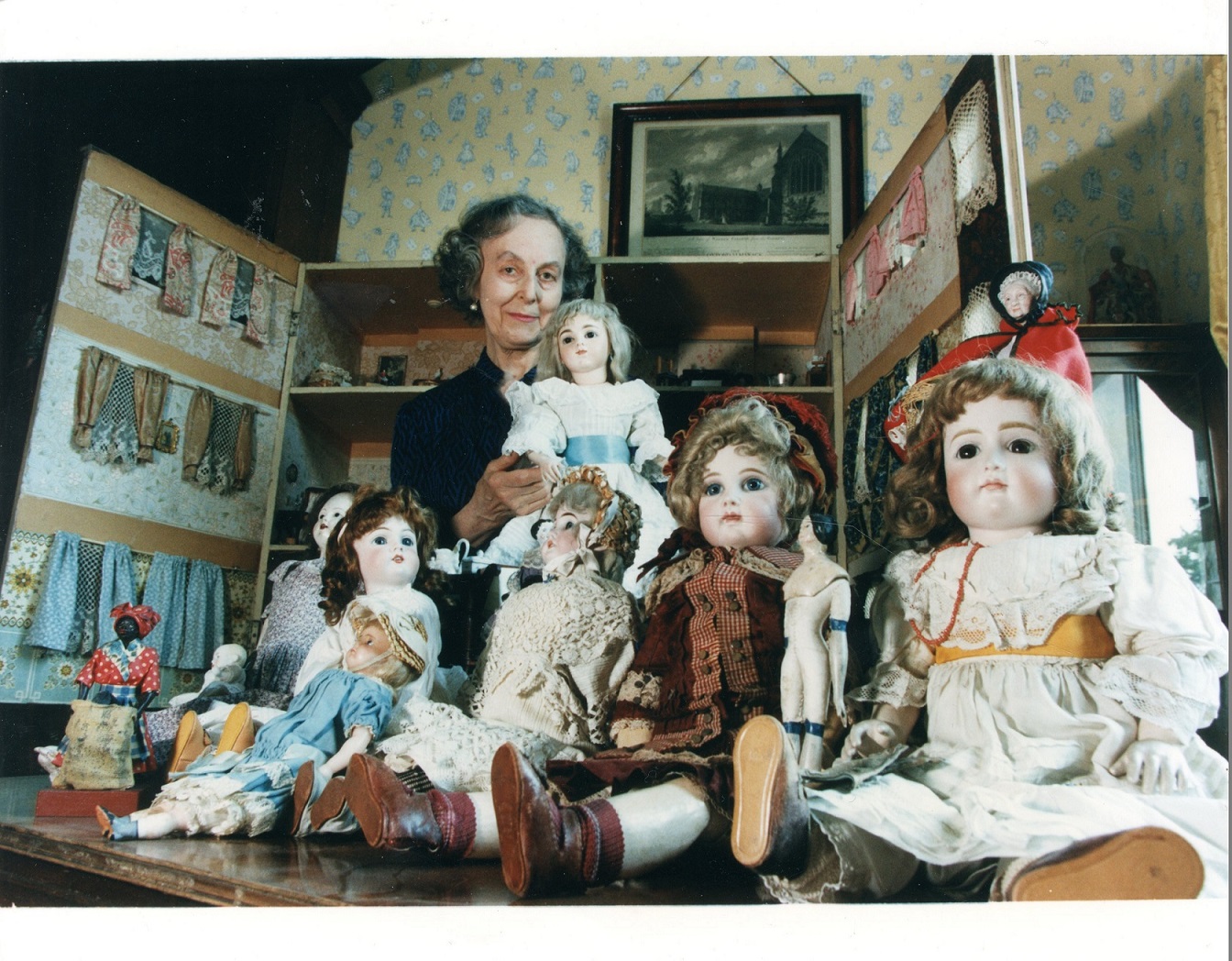 It is not easy to get into a collector’s mind and understand the reasons why someone chooses to gather selected objects to be part of something bigger. Collecting is a very meaningful occupation. It is a process of deliberative selection of a group of objects “to be lifted out of the common purposes of daily life and to be appropriate to carry a significant investment of thought and feeling, and so also of time, trouble and resource”, in Susan Pearce’s words[1].

Dolls, dolls’ houses, toys and teddy bears, for some reason grew in importance in Faith Eaton’s life becoming, therefore, ‘sacred’ for her. She not only owned, selected or looked after them. She made them and was knowledgeable about them as well. This archive provides some insights on why and how Faith drew her paths in the dolly’s world.

Writing about antique dolls for the first issue of the magazine “Dollmaking & Collecting”, Faith enlightened she knew precisely where and when her fascination for them started: her mum’s childhood dolls. In Faith’s own words:

Once upon a time a young woman discovered three of her mother’s childhood dolls in a box in a seldom opened cupboard. . . you can guess what happened next. As this is fact not fiction I can add that this momentous find took place about 1950 – when English doll collectors were as rare as three-faced Brus.[2]

This quote shows us a mix of personal fascination and acknowledgment of the rarity of this field. We do not know if she was sensible to the rarity of collecting dolls from the beginning of her career or it was something she learnt from her passion. However, the 1950s seemed to be a turning point not only for Faith’s career, and also for the practice of collecting dolls and doll’s house. A few important things happened in that decade. For instance, in 1953 Nerea de Clifford founded the Doll Club of Great Britain – whose mission is to ensure the preservation of dolls and dolls’ houses in addition to enable its members to share and expand their knowledge on this subject[3] – and the V&A had started to dedicate the Bethnal Green Museum to the childhood, becoming later in the 1970s our lovely Museum of Childhood. Faith Eaton was in her early 30s and although she was a trained occupational therapist she was unable to pursue this career for health reasons, and decided to take up her interest for dolls and dolls’ houses in a professional way[4].

It was also in this remarkable decade that two exhibitions with the same name and purpose took place: the “Dolls Through the Ages Exhibition” of 1954 and 1959. Faith Eaton’s participation in the 1954 show is still quite uncertain for us, as the only material found in the archive (so far) is a folder of letters sent from people who wanted to be part of the show, but none of them seem to be addressed to Faith. Why would this material be found in Faith’s archive? One explanation could be the fact that Faith, in 1959, was the designer of the show with same name. You can have a sense of how the 1954 exhibition was displayed in this video:

Pathe film of 1954 Dolls Through the Ages Exhibition

Five years later, in 1959, the next “Dolls Through the Ages Exhibition” took place at the Ceylon Tea Place in Regent Street, in aid of the Greater London Fund for the Blind. Faith Eaton was not only the Exhibition Designer but also responsible for writing – and, therefore, selecting – the exhibition highlights. Some of the dolls were loaned by the Bethnal Green Museum. Faith recollections in the 1950 was that “[t]here were a few dolls on show in selected museums, about half a dozen books on the subject and, very occasionally, there would be an exhibition of dolls ‘in costume’ in aid of some charity”. This last note was probably on this exhibition, which displayed particular characters, as described by Gwen White in the Introduction of the exhibition’s catalogue:

Those dolls with long, long necks, and maybe with carved rings come from a land where long necks are the thing, and those with sloping shoulders tell us that at their time sloping shoulders and low cut dresses were the aim of fashionable ladies. How convenient to have one’s waist perpetually slim with no thought of diet, and to have tiny feet especially made where tiny feet are considered beautiful. Small button mouths which have just said ‘plum’, or lips parted to show teeth of straw or later of china.

As we mentioned in previous posts, we found a great deal of scrapbooks in Faith’s archive. That was the way she worked in order to organise and collect information, pictures, newspaper/magazine cuttings on the subjects she was passionate about. It would not be different with the Dolls Through the Ages Exhibition. Although the majority of scrapbooks were fully completed with all the information glued or sellotaped on them, this one on the other hand was left unfinished as some of the newspapers cuttings are detached and not organised.

Organised or not, the newspapers cuttings tell us that the exhibition was well received. One clipping shows an article entitled ‘Friendly’ and reads: ‘The exhibition was to have closed on August 7 but has been so popular that it has been extended until August 21.’

Dolls Through the Ages Exhibition was probably Faith’s first exhibition but definitely not the last one. For instance, in 1962 she also took part in an exhibition with The British Toymakers Guild entitled “Toys”, showing there some characters toys in wood. Later in her career, in 1990, she would take her whole collection to be exhibited in Sledmere House, in Yorkshire. That exhibition received the title “Treasure of Childhood” and exhibited only objects that were part of Faith’s collection.

Faith’s scrapbook of the exhibition showed how proud she was of her collection, and the work that went into showing it off.

[1] Pearce, Susan M, 1995. On collecting. An investigation into collecting in the European tradition. London: Routledge. P. 23.

Thank you for this insight into Faith Eaton’s world. I have always found her and her collection fascinating and her book on Care and Repair of antique dolls essential to caring for my own small collection.

A Treasury of Postcards

By Holly Tatham As Eloisa mentioned in her last post, we’ve spent days looking through and sorting out hundreds of Faith Eaton’s postcards. Whilst doing so we’ve enjoyed and...