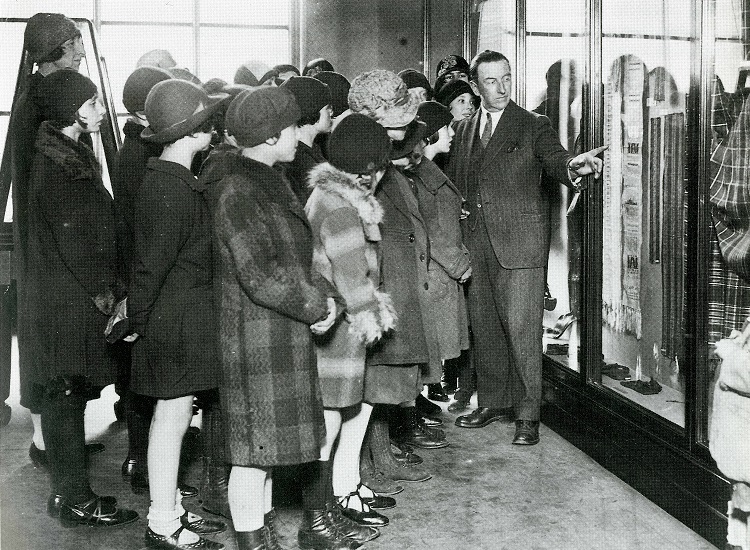 Here’s another gem from The Times in the 1920s. The perennial problem of children in museums had arisen in the letters pages, and the newspaper approached Sir Cecil Harcourt-Smith, Director of the V&A, for comment…

Children in the Museums

The behaviour of children in museums in London having been the subject of letters to The Times recently, Sir Cecil Harcourt Smith, director of the Victoria and Albert Museum, yesterday stated his views on the matter.

He expressed himself wholeheartedly on the side of the children, and strongly deprecated the suggestion that they were, in any general sense, a nuisance either to adult users or to the officials. From his own experience, and knowledge gained from the experience of others who worked in the museum, he asserted that at least 75 per cent of the large number of children who visited the Victoria and Albert building during their school holidays behaved themselves properly. Even those who were inclined to be noisy were quickly controlled by the wardens, a body of men who had developed some of the best attributes of the London police. The atmosphere of the museum seemed to affect the mind of the average child in much the same way as the atmosphere of a church.

Sir Cecil Harcourt Smith said it would be a very serious step, and one to which he, personally, would never agree, to exclude children unaccompanied by adults. They should guard against the impression on the mind of the child that a visit to a museum was a kind of penance. That would perhaps best be done by allowing the children to discover the museums and their treasures by themselves. There was always the possibility that their interest would be captured, perhaps permanently. The museum was a great educational medium, and no man could calculate the amount of harm which might be done by discouraging children from taking the fullest possible advantage of it. A significant and important fact noticed in recent years was that many children had “discovered” museums by themselves, and then brought their parents, who generally came again. This was most notably the case at Bethnal Green Museum, now being reorganised, chiefly in the interests of the younger visitors.

A cordial tribute was paid by the Director to the voluntary teaching regularly carried on among the children in the Victoria and Albert museum at school-holiday times by Miss E M Spiller and her voluntary helpers.

Sir Cecil Harcourt-Smith (1859–1944) was an innovator, not afraid of shaking up the museum. He started the job of reorganising the South Kensington Museum in 1908, overseeing its transformation into the Victoria and Albert Museum by 1909. He promoted guidebooks and catalogues to help people understand the collections. It is clear from this article that Harcourt-Smith encouraged the work of Arthur Sabin at the Bethnal Green branch of the Museum; Sabin was, at this time, embarking on a bold new gallery especially designed for children – which was to have far less of the ‘church atmosphere’ and policeman-like wardens.

Ethel Spiller was an art teacher and painter, whose energy during the 1915 Children’s Room experiment at the Museum had convinced the V&A that children could be accomodated and even welcomed. She set up a room of interesting objects (including 2 dolls houses) and provided pencils and paper for drawing, and a willing ear for conversation. Eight years on, she continued to lead the museum’s volunteer force of gallery educators.

children education History of the V&A Museum of Childhood