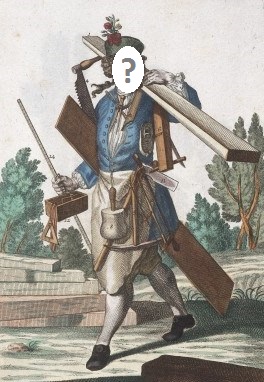 On the right hand side of this early 18th century wardrobe, in bold letters several inches high, is painted “Edmund Joy 1712”.

Who was this confident inscriber, who claimed this enigmatic piece of furniture as his own? Was Edmund Joy the first owner, or the talented carpenter of this unusual object? Whoever he was, his name is now inextricably linked to what we know as ‘The Joy Wardrobe’.

Amazingly, another very similar wardrobe has survived which is signed, in the same hand, “Edmund Joy 1709”. The existence of TWO wardrobes, three years apart, suggests that Edmund Joy was probably the maker.

I would love to know who this clever Mr Joy was. Did he specialise in miniature houses, or were these two wardrobes novelty items he made for a favoured customer? Where was he? The V&A’s Joy wardrobe bears such a strong resemblance to Kew Palace that a west London address would not surprise me.

But searching for Edmund has found nothing conclusive.

A man named Edmund Joy is buried in Barton Turf church, Norfolk. He died in 1744 aged 63, so he could be our man, though there is nothing else to prove the link. Colin Gilbert, of the Barton Turf History Project, kindly sent me a picture of the tombstone. Colin says that his burial in the centre of the church was a privileged position. If this is our Edmund Joy, he sounds like a lovely man.

The other Joy wardrobe from 1709, by the way, is now in a private collection somewhere. It was first brought to attention by dolls’ house historian Vivien Greene, in her 1955 book ‘English Dolls’Houses’. She called it ‘Mr Joy’s Surprise’ and without knowing the V&A’s example, described it as ‘a thing singular, unparalleled, a nonesuch’.

At the time it was owned by Eden Minns. He was a remarkable man too – a designer for Gordon Russell, he worked on the Utility Furniture project in the 1940s. How wonderful that this designer of strict functional forms and clean, uncluttered furniture would have had such an outrageously disingenuous and decorative piece in his own home!

In Vivien Greene’s characteristic way – both waftily vague and sharply astute – she muses on the wardrobe: ‘One might guess an origin on the east coast, some Suffolk village which has been encroached on by the sea, lost two hundred years ago, its name quite forgotten…’