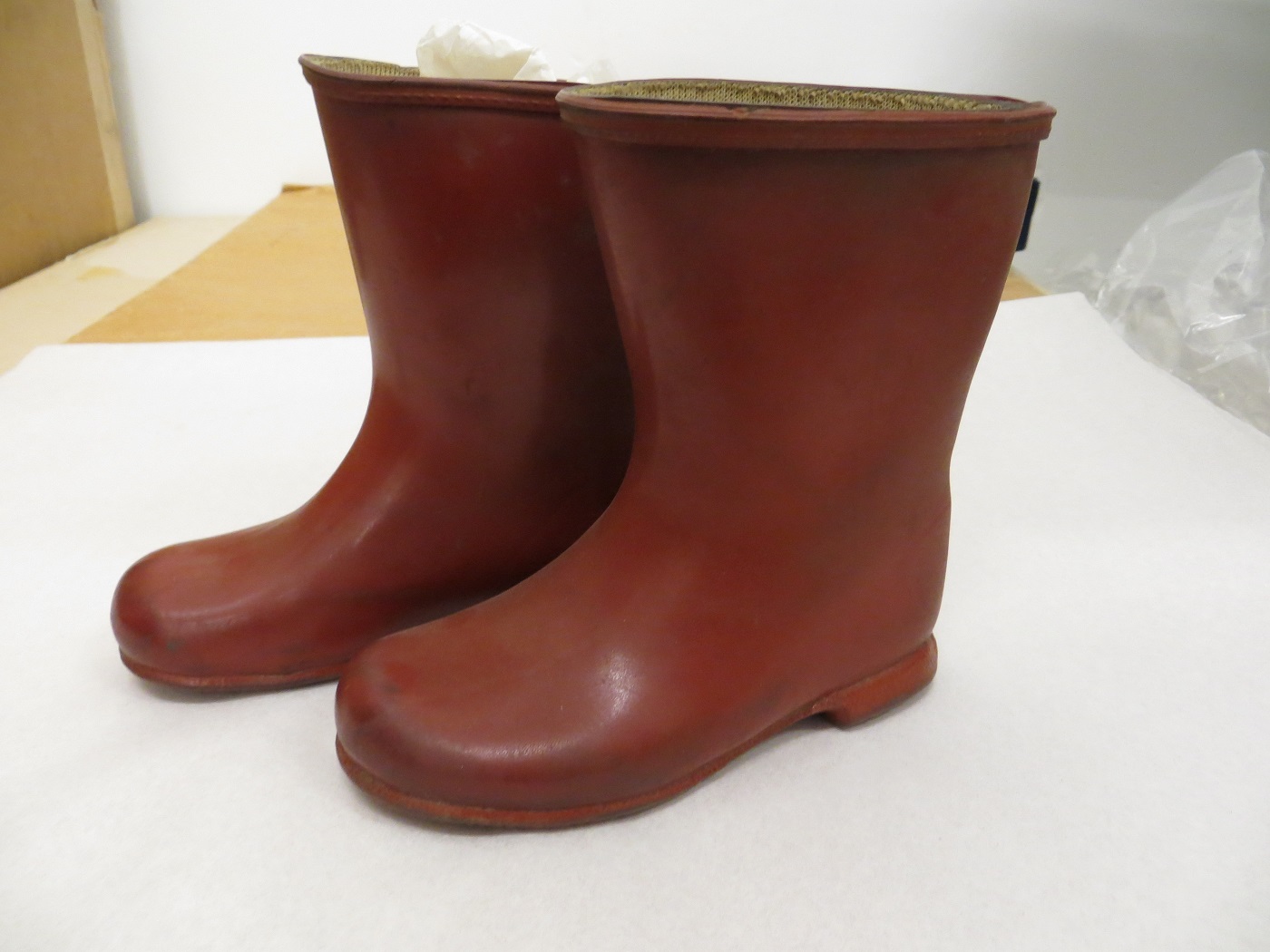 The V&A’s Textiles and Fashion collection holds tens of thousands of objects and is one of the most comprehensive collections of its type in the world. Researching this huge collection is one of the greatest pleasures of my job but, being a busy boy, I cannot devote as much time to research as I would like. Trying to give fair representation to different types of rainwear, taking account of condition and ‘displayability’, while also sticking to the timeframe and to the themes of ‘British, variety and fashion’ was quite challenging. The collection presented many possibilities for display, but also revealed that the Museum lacks the full story. For example, we do not have a great deal of rainwear from the 19th and the first half of the 20th centuries, and only a single rain hat (hardly a fashionable one at that). This may be put down to strategic collecting priorities in the past or the V&A’s lack of money to make purchases. Most likely it is due to the deterioration of old waterproof garments, which were frequently impregnated with rubber, which tends to become brittle, or which utilised plastics whose long-term properties were not yet understood.

The V&A has a very large library full of books slap-bang in the middle of it, supplemented by the many publications held by my department. In addition are extensive paper archives, assembled over decades by past members of staff, on any conceivable subject including rainwear. The V&A’s Prints and Drawings Study Room is an invaluable resource for staff and for the public, and I made several appointments there to look at posters, photographs, paintings, drawings and naughty postcards in hope of finding something I could include in the display or at least learn from. Aside from the time spent staring at words (and works) on paper, I also had an enjoyable morning at the Museum of Childhood looking for inspiration in their collections. As ever, the internet provided a great deal of information when researching potential new acquisitions, of which there have been two (keep watching the horizon for more information about these!).

An informal mock-up of the display with advice from Conservation, shortly before Christmas, helped cement the choices and, eventually, I had an object list. Seeing the objects with your own eyes, on mannequins, standing alongside each other is by far the best way to see if the thing will work visually. Paper or monitors just don’t shape up. I also have enough material for gallery text (and blog posts!), catalogue records and perhaps a talk or two. Perhaps more valuable in the long-term, going beyond the autumn, is knowing now how we would like to improve the collection.

If you have some rainwear which you think should be in a museum (specifically this one), please email us with some pictures and some information via textilesandfashion@vam.ac.uk.