There is nothing better for a man than that he should eat and drink, and make his soul enjoy the good of his labour

In the 1860s, Londoners could take a horse-drawn cab out from central London to a distant area known as Brompton. There, at the South Kensington Museum (as the V&A was then named), they could enjoy the collections of applied art and science late into the evening thanks to the use of gas lighting in the galleries – a world first. The founding Director, Henry Cole, hoped the Museum would 'furnish a powerful antidote to the gin palace'. But visitors who made the journey would also be treated to another world first – a museum restaurant.

When entering the Museum from the garden, the public were greeted not by
galleries but by three arches with glass screen doors that led to a trio of refreshment rooms. Henry Cole's concept of a museum restaurant was seen as a way of encouraging people to come and enjoy culture. Cole had learnt about visitors' needs (tea and a bun or a hot meal) while managing the Great Exhibition in 1851. Most other museums did not invest in catering until the 20th century.

The original Refreshment Room was built in 1856. Described as 'hideously ugly' by a leading newspaper, it was a temporary structure to the east of the Museum's main building. Designed by Francis Fowke, the structure made a striking contrast to the rest of the museum, with its timber Tudoresque cladding. To critics' delight, the building was demolished in 1867.

Three new refreshment rooms – the Gamble, Poynter and Morris Room – were opened in 1868, although work continued on their decorations for many years. The first room, originally known as the Centre Refreshment Room and now as the Gamble Room, stood immediately opposite what was intended to be the main entrance. Besides enticing visitors with delicious smells and the welcoming sounds of gaiety, the room was wrapped in a glittering expanse of colourful ceramic, glass and enamel. Newspapers found the room "bright and cheerful ... It looks like one of the richly and gaily-adorned cafés of Paris".

Much of the decorative scheme for this room was planned by Godfrey Sykes, a highly respected young artist drafted in by Cole. But after Sykes' untimely death in 1866, the baton was passed to the designer James Gamble. The walls and large columns were covered in a variety of colourful ceramic tiles. The so-called 'majolica' tiles were made from pottery decorated with coloured lead glazes. Introduced to the public at the 1851 Exhibition, 'English tin-glazed majolica' imitated a process used since the Italian Renaissance. Other embellishments included a frieze of children or 'putti' (cherubs or cupids) harvesting food, dining and reading newspapers; grand mirrors in majolica frames; carved scenes with elephants and camels surrounding the doors; and stained-glass windows to hide the (unsightly) kitchens, ice house and art school buildings beyond. The ceiling was decorated in enamelled iron sheets reminiscent of enamelled name-plates found at railway stations.

The luxurious materials were meant to dazzle, but they also served a practical purpose. They were selected primarily to resist fire, steam and food odor, as well as to make the dining room easier to clean. The iron ceiling plates were a hygienic, washable covering for an eating place and also formed a fireproof cell within the Museum. The Victorians were very conscious of the dangers of fire. It would have taken horse-drawn fire engines a long time to reach South Kensington, which was still a very rural place in the 1860s.

To the east of the Gamble Room, the smaller Grill Room (now the Poynter Room) was fitted out to 'broil chops and steaks'. Painter Edward J. Poynter was chosen to design this dining room, which had a remarkably different feel to the Centre Room. A cast-iron open range with an open grill dominated one wall, with 'hot chambers' on either side where plates were warmed. Like Gamble, Poynter used glazed ceramics on the walls, mostly with a Dutch blue paint. The tiles were painted by female students attending a special porcelain class for ladies at the National Art Training School. The students were paid between six and nine pence per hour. This was an unusual public commission for women at this time.

In contrast to the European opulence of the Gamble Room, the Poynter Room contained Eastern influences, especially in the wave patterns and the floral and peacock motifs. These details foreshadow the coming of the Aesthetic Movement in England, when the cult of beauty reigned. On the upper walls, sets of painted tiles represent the months and seasons, as well as the signs of the zodiac. Below, fruit and flowers are interspersed among portraits of women from classical literature, including Helen, Venus, Medea and Sappho.

Visitors would be treated to three different restaurant menus – divided according to social status. In 1867 the first-class menu included items such as jugged hare (for 1 shilling and sixpence), steak pudding (1 shilling) and seasonal tarts (half a shilling). On the second-class menu, one could find veal cutlets (10 pence), poached egg and spinach (1 shilling) and buns and sponge cake (one pence). A third-class service for 'mechanics and all workmen employed at the Museum Buildings and even for the humble working class visitors', was also provided elsewhere on site. Considering that a typical unskilled labourer might earn £1 per week, dining in the refreshment rooms was not cheap.

William Morris was one of the most famous designers of the Victorian period, yet at the time Henry Cole hired him to design the 'Western' or 'Green' Dining Room (now the Morris Room), he was a relative newcomer. The young designer was 31 at the time and his firm, Morris, Marshall, Faulkner & Co., was relatively unknown. Morris, later famous for his championing of the Arts and Crafts Movement, suggested a scheme influenced by Gothic Revival features and Elizabethan-style panelling.

The room is circled in a plaster relief of olive boughs and a frieze of hounds chasing hares. Morris enlisted the help of his friends, architect Philip Webb and painter Edward Burne-Jones, to help with the decoration. Webb took his inspiration from a wide variety of medieval and ecclesiastical sources, while Burne-Jones used the signs of the zodiac and images of medieval women performing domestic tasks. Morris and Webb collaborated on the ceiling, which was covered in geometric patterns and floral arabesques pricked directly into the wet plaster. The windows of bullseye bottle glass were conceived by Webb, with stained-glass figures designed by Burne-Jones. According to Webb's design notes, the deep, forest green oak panelling that gave the room its nickname was originally intended to be blue in colour.

Hints of the organic patterns that would later make Morris famous can be seen in the undulating olive boughs that wind through the room's plasterwork. The room was a source of visual ideas for Morris, notably in his later 'fruit' and 'willow' wallpapers. Upon completion, the Green Dining Room became a popular rendezvous spot for artists and friends, including J.M. Whistler, Edward Poynter and George du Maurier (though Edward Burne-Jones preferred to dine in the Grill Room!).

The three Refreshment Rooms have been hailed throughout the years for their wealth and breadth of ornamentation. Director Henry Cole was truly forward-thinking in his insistence that these three eating rooms should reflect a range of contemporary design theory. From the Renaissance Revival of the Gamble Room through the international flair of the Poynter Room, to the Morris Room's rich eclecticism, the Refreshment Rooms certainly had something for everyone. As the inscription from Ecclesiastes that crowns the Gamble Room observes: 'There is nothing better for a man than that he should eat and drink, and make his soul enjoy the good of his labour'. 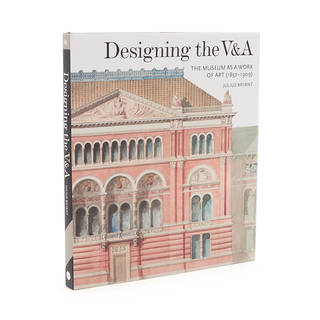 Books about the Museum

Satisfy your curiosity and delve deeper into the V&A