Artists have always been interpreters of contemporary issues and those who choose the book as their medium are no exception. While artists' books were emerging as an expressive new artform in the 20th century, the global movement of environmentalism, striving to protect the natural world, was also formalising and gaining political expression.

This article looks at three artists who have used the book to express their concerns about environmental issues or adopted environmentally conscious approaches in their practice.

How to Say 'I Love You' in Greenlandic is an artist's book by writer and printmaker Nancy Campbell. It was conceived during a residency at Upernavik Museum in Greenland in 2010 and contains pochoir prints, a printmaking process that uses stencils. The prints depict silhouettes of Arctic icebergs, a melting landscape, and Campbell pairs them with words from the West Greenlandic language of Kalaallisut which is on UNESCO's Atlas of the World's Languages in Danger. The words are printed alongside their English translations. For instance, kinguneqartarpoq translates as 'he drinks a second brew from old coffee grounds or tea leaves' and akunnagaa as 'it is too late to begin'. Campbell wishes the words to be "anchored on paper…in the hope that a fragment of this poetic language will be preserved in a safe place where other people can find it."

Dutch artist herman de vries is concerned about the breakdown of the relationship between humans and the environment. His practice involves collecting, cataloguing and displaying items found in nature. In Rosa Damascena damask roses (a recurring material in his installations and publications) aim to activate the viewer's physical senses and remind us of our primal connections to the natural world.

In 1986 de vries and his wife susanne (who both use lowercase letters for their names to avoid hierarchy) began a long-term project, Die Wiese (The Meadow). They bought a small plot from an area of commercially farmed land near their home in Eschenau, Germany, and spent the next 33 years working to return it to its natural state. Using de vries's expertise as a trained horticulturalist, they began by planting a hedge as a border around the plot, shielding it from the surrounding culture of pesticides and fertilisers, and collected seeds from nearby embankments to plant there. Over time this encouraged birds, insects and mammals to make the plot their habitat. De vries's photobook Die Wiese: Eschenau 1986 – 2013 documents the changes in the landscape from 1986 until the book's publication in 2013.

Artist Tamsin Green founded manual.editions in 2021 as a platform to publish her handmade books in an environmentally friendly way. Its principles are to minimise waste and the use of harmful materials, make locally and prioritise recycling. She works with paper from producers who are committed to sustainable sourcing and recycling, and with a printer based only 3 ½ miles from her studio. Paper off-cuts from the bookmaking process are used as packaging for her books.

This is How the Earth Must See Itself: a walk with natural features was published by manual.editions in 2021, and contains archival material, open-source data and Green's own photographs. Walking the south coast of England, she followed rock features categorised by the Ordnance Survey's (OS) mapping of the area in the late 18th century, part of Britain's preparations for a feared French invasion. In the resulting photobook, the OS surveyors' systematic classifying of natural features merges with Green's personal experience of wandering solitary in the landscape. 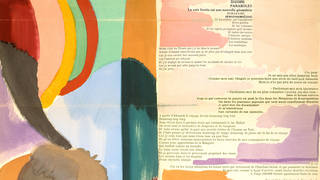 Artists and the Book

A display of artists' books on the themes of landscape and language, drawn from the National Art Library's extensive collection