Balenciaga's hats are an integral part of his fashion, [ensuring] that volumes are balanced and the silhouette is perfectly finished off.

In the 1950s and 60s etiquette dictated that hats be worn on all formal occasions, including when out at a dinner, a cocktail party or an evening at the theatre. A fairly conventional ensemble could be paired with a striking hat which lifted the whole look and made it more avant-garde. Couture hats were made bespoke to complete a client's outfit – the client could buy the whole ensemble or leave the hat if it was too daring. Designs for hats were as fiercely protected as those for dresses – the police commissioner stamped the official sketches to protect them from being copied.

Many couturiers outsourced their hat-making, but at Cristóbal Balenciaga's premises in Paris there were two workrooms for millinery. Balenciaga did not design the hats himself but worked closely with his hat designers: the Franco-Russian milliner Wladzio d'Attainville and later the Spaniard Ramón Esparza.

Balenciaga's hats were some of the most elaborate in Paris. So much so that during the Second World War the authorities shut down his millinery workshops, accusing him of exceeding the fabric allowance under austerity measures and encouraging the fashion for extravagant millinery. His hats of the 1950s and 60s grew increasingly surreal, as they played with scale, shape and unusual materials, equalling his innovative dress designs.

Many of the Balenciaga hats in the V&A collection were owned and worn by the supremely elegant socialite Gloria Guinness, a discerning and loyal customer of Balenciaga, who was frequently named on the International Best Dressed List. She once said:

Hats must be made on your head. A ready-made hat will not be you! While I am sitting for a dress, I sit ten minutes longer, and Monsieur Balenciaga works on a hat.

This dome shaped, white leather 'pillbox' hat belonged to Gloria Guinness. Balenciaga was strict about how his clothes were to be worn. He intended the pillbox hat – a style that he became known for – to be worn further forward. But Gloria was confident in her own sense of style and wore her pillbox hat pushed back behind the ears.

The dramatic 'spiral' hat is worn like the pillbox, perched on top of the head. Inside, it is secured by three haircombs which support the sculptural spirals rising up at the back. The hat is a perfect example of the dramatic yet minimal sculptural shapes for which Balenciaga was known. Its clean lines and solid block colour exemplify the couturier's desire to strip things back to their simplest form.

This oversized felt hat is typical of Balenciaga's sculptural style. It would have been worn with daywear – a tailored suit or tailored sculptural coat. Balenciaga often teamed large or flamboyantly constructed hats with the linear tailoring of his daywear.

This beret-shaped decorative hat is made from glossy golden straw, mounted on to a wire base and finished with leaves and berries. It was worn by the British theatre and film actress Martita Hunt, best known for her performance as Miss Haversham in David Lean's 1946 film adaptation of Great Expectations.

Another hat of woven straw, this time in striking green, was given to the V&A by the heiress and niece of Mrs Fern Bedaux, the very wealthy widow of American millionaire office systems pioneer Charles Bedaux. Mrs Bedaux regularly purchased outfits from Balenciaga, amassing a large wardrobe of designs, many of which were donated to the Museum.

This dramatic pom-pom hat of cut ostrich feathers is another that belonged to socialite Gloria Guinness. New X-ray photography has revealed how it is secured internally by a haircomb.

See inside Balenciaga's ostrich feather hat with our X-ray interactive 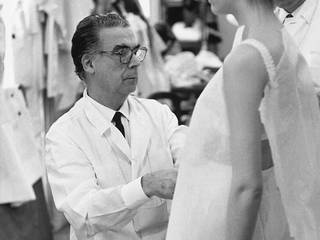