Benjamin Brecknell Turner took up paper negative ('Calotype' or 'Talbotype') photography in 1849 with a licence from its inventor William Henry Fox Talbot (1800 – 77). Talbot was a photography pioneer who had invented the Calotype process in 1840 and patented it in 1841. His licence cost one guinea and was "for amusement only" – Turner was an amateur, not a professional photographer, though he went on to have a long and distinguished career exhibiting his photographic works of rural England.

The negatives used in the Calotype process were made of fine paper prepared by hand by brushing with a solution of potassium iodide and silver nitrate solutions. They could be used damp for extra sensitivity in the camera. After exposure, the negative was then waxed to make it translucent. A positive image was made by placing another piece of sensitised paper beneath the negative and leaving it to print in the sun. The prints were the same size as the negatives.

Turner's first photographs measure around 14 x 17 cm (5 x 7 inches). Sometime around 1851 he acquired a new, larger camera, capable of making larger negatives, and hence more impressive prints, measuring about 29.5 x 39.5 cm (11 x 16 inches). Paper Calotype negatives were most usually printed using the 'salted-paper' process. This resulted in a matt surface on which the image appears to be part of the fibres of the paper. However, from the time Turner started to use his larger paper negatives, he mainly used the newly introduced 'albumen' paper to make his prints. Albumen was the first semi-glossy coated photographic print paper. Thin paper was first coated with a mixture of whisked egg white and salt, then sensitised with silver nitrate. Like salted paper images, they were usually printed out in sunlight under direct contact with the negative in a printing frame.

Turner's works appeared on sale on many exhibition walls in the first ten years of photographic exhibitions (1852 – 62). Records of the sales of photographic prints at this period are almost non-existent, but papers relating to the third annual exhibition of the Photographic Society of Scotland, (opened in December 1858), show that Turner received orders for 12 photographs, priced around 7 pounds and 6 pence each. Turner complained to the organisers that the photographers took a long time to print, implying he made the prints himself rather than having them printed by a professional.

We can't be sure, however, that Turner printed his own photographs. We know there was sufficient demand for him to place print-orders in the hands of a professional, and it's likely that he sold small numbers through the leading London photographic suppliers, Murray and Heath. Between 1852 and 1854, Benjamin Brecknell Turner compiled 60 of his own photographs in what is believed to be a unique personal album, titled Photographic Views from Nature, now in the V&A's collection. These photographs look different from some of the surviving prints mounted on card – the album prints are warmer in colour and relatively matte compared to the cooler, greyer and more glossy card-mounted prints. The rich sepia tones of the images in Photographic Views from Nature are not the results of yellowing or fading over time – this is how they were intended to appear and is a result of the chemical processes involved. They have survived in remarkably fine condition.

For his portaiture, Turner used glass plate, or wet collodion on glass, negatives. In this process, a sheet of glass was hand-coated with a thin film of collodion (gun cotton dissolved in ether) containing potassium iodide and sensitised with silver nitrate. The plate had to be exposed while still wet and developed immediately. It was introduced in 1851 by Frederick Scott Archer, and gave a higher resolution of detail than the Calotype, as well as dramatically cutting exposure times.

Turner still preferred to use the older Calotype process for his landscape and architectural images however. Calotypes were lighter to carry when travelling and also produced a slightly grainy texture in the image which suited rural subjects. He used predominantly the Calotype negative and albumen print processes throughout the 1860s, even though the majority of his peers had switched to using glass plates. By the 1880s he was experimenting with the carbon print processes – in which gelatine is mixed with carbon pigment rather than the silver compound found in most photographic printing processes – but only a few examples of his work produced by this method are known.

Exposure times for Calotypes could lasted up to 30 minutes, lending many of Turner's photographs a quiet, haunting and timeless quality (figures, animals or foliage would not remain still enough to register on the negative). He liked to photograph on bright winter days when the intricate pattern of branches and the rooflines of dramatic ruins stood sharply outlined against the sky. He manoeuvred his heavy photographic equipment along country roads to secluded places in a horse-drawn cart. Yet he was also spurred to travel the country, making pictures in locations as far afield from his native London as Lynmouth in Devon, to the west and Whitby in Yorkshire, to the north. 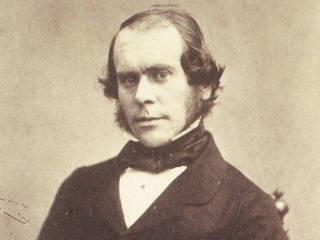