Conservation work on an intriguing mother-of-pearl frame led to some fascinating discoveries about its history and provenance by Ariane Théveniaud, an intern with the V&A's conservation team.

Most of the frames in the V&A's collection are made from gilded wood or cast ornament (decoration made seperately and then applied to the surface). A small number are made from more unusual materials – leather, lacquer, turtle shell, papier mâché and precious stones.

The wooden frame is veneered with mother-of-pearl and engraved with scenes from the life of the Virgin and Christ, figures of saints and floral borders. The glazed lockable door and central recess lined with red velvet indicate that it was probably made to house flat objects such as miniatures. When the frame came to the Museum in 1882 – a bequest from former tailor and decorative art collector John Jones – little was known about its age or origin. Jones had dated it to 17th-century Spain, but on inspection, conservators revealed that both the woodwork and the metal hinges were probably from the 19th century. The Museum's textile curators confirmed that the same was true of the red velvet, leading us to question whether the precious mother-of-pearl elements could really be around 400 years old.

So we set about investigating. Curators in the Sculpture department were able to identify the engraving technique on the mother-of-pearl as very similar to that traditionally used by the Franciscan community of Friars in Bethlehem. As a city of religious importance, Bethlehem has, for centuries, attracted a stream of pilgrims looking to return home with souvenirs. The Museum of European and Mediterranean Civilisations in Marseille has several Palestinian objects which incorporate engraved mother-of-pearl in its collection. Seen side-by-side, the similarity to the engraving on our frame is striking.

A closer look at the iconography of the frame's engraving provided further evidence. Among the scenes of the life of the Virgin and Christ – the Annunciation, Visitation, Nativity, Adoration of the Magi, Presentation at the Temple, Circumcision and the Flight into Egypt – we found the figures of four saints that were clearly Franciscan judging by the style of their clothes and attributes. They were identified as Saint Francis of Assisi with the stigmata, Saint Anthony of Padua with the lily, Saint Stephen with the rocks (a reference to his martyrdom) and Saint Bernardine of Siena supporting the monogram of Christ. Five apostles and the Saints Jude, Andrew, Peter, Paul and John, are also depicted.

Dating the engravings proved difficult, as we knew the technique was used in Bethlehem for several centuries. However, the mother-of-pearl elements appeared to fit perfectly with the wooden frame, suggesting that they were made at the same time, in the 19th century. Our investigations revealed that the object was not Spanish, as its original owner had thought, but was quite probably a 19th-century souvenir from the Holy Land.

When the frame arrived at the conservation studio, 81 elements of mother-of-pearl had become loose and many were missing. We began a treatment programme to both stabilise these elements and restore the readability of the engraving. We reinstated the lost pieces using hide glue – a glue derived from cow skins which is easily reversible, and therefore widely used in conservation work. We had to closely examine the pre-existing joints of glue on the frame and the continuity of the decorative pattern in order to work out the correct location for each fragment.

Once secured, it was obvious that the mother-of-pearl elements would benefit from cleaning. We first tried using cotton swabs moistened with deionised water (water that has had the chloride, calcium, potassium, nitrates and sulphates removed), but soon discovered that the mother-of-pearl was covered in a patchy yellow coating, which turned out to be a shellac varnish. Observation under UV-light indicated that this varnish was also present on the repairs, and so not original to the object.

Having consulted with furniture curators, we decided to remove the coating, in order to improve the readability of the engraving. We conducted several tests: the most efficient and gentle method of removing the shellac was to apply a paper poultice (a common method of removing unwanted substances from objects) moistened with deionised water. After several minutes the varnish could be easily removed with cotton swabs.

The removal of the varnish led to one final discovery – the presence of coloured red and green pigments on the engraved star motifs. To protect these newly revealed pigments, we applied a coating of Paraloid B72 (a very stable acrylic resin) to the mother-of-pearl elements.

With the work complete, the mother-of-pearl is now stable and the appearance is greatly improved. We chose to preserve traces of the glue in case some of the missing pieces are ever found. We also created a virtual reconstruction of the frame using Photoshop software, to give an impression of how the frame would have looked originally, with all of its pieces intact.

The successful restoration of this beautiful frame was the result of technical examination and art historical research involving curatorial and conservation specialists from across the Museum. 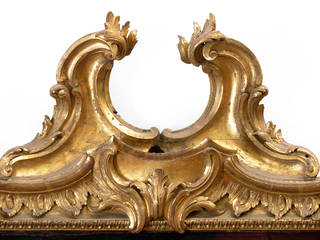