It was often the structures beneath Victorian clothing that gave women's fashion its form. Corsets (also known as stays) moulded the waist, while cage crinolines supported voluminous skirts, and bustles projected a dress out from behind. Fashionable Victorian women wore an array of other undergarments, from corset covers that hid the lines of their stays, to petticoats for added volume and warmth. Exactly what was worn and how it was made changed rapidly throughout the era, influenced by forces like technological innovation and shifting attitudes towards gender.

When Victoria became Queen in 1837, fashion was characterised by low, almost off-the-shoulder necklines for evening and formal wear (higher necklines, collars, and small shawls were worn for daywear), cinched waistlines often forming a low point at the front, and fairly wide skirts protruding to the same extent all the way around. Sleeves often featured sizeable puffs.

This silhouette was created largely by undergarments. Long corsets rounded the bust, held the waist and stomach in, shaped the hips and concealed other underwear worn beneath stays – including chemises (also known as shifts). Throughout the period a chemise and drawers were sometimes replaced by a garment combining the two, known as combinations.

Corsets were usually made from hardwearing cotton and were hand-sewn. Busks – made of materials like wood or metal – were inserted up the centre front to give a smooth line. Techniques including boning and cording offered additional support. Boning was carried out using baleen (a keratinous material also known as whalebone, extracted from the upper jaw of baleen whales), which was flexible as well as supportive. Stays were laced from the back, increasingly through metal eyelets invented in the 1820s, which meant corsets could be laced more tightly. Stays from this period also featured straps positioned close to the shoulders to remain hidden when women wore sweeping necklines. Stays were not the only structural undergarments designed for the upper half of women's bodies; puffed sleeves were supported by down-filled pads.

Skirts at this time were large and bell-shaped, supported by numerous layers of petticoats which proved to be heavy, hot and unhygienic. Volume was achieved through tiered, flounced, quilted or stiffened petticoats, the latter providing the most supportive structure for the era's vast skirts. Stiffened petticoats were typically cut from a rigid fabric of woven horsehair and linen called 'crinoline', a name that would eventually come to denote not just the fabric, but the garment itself.

Women's fashions and dress production changed dramatically in the 1850s due to a range of mid-century innovations. For example, the early synthetic dye, aniline purple (later called mauve), was patented in 1856 by William Henry Perkin, and became one of many such dyes available to a clientele eager to obtain dresses coloured in new, bright shades. On the production side, the uptake of sewing machines led to the mass production of clothes. These developments impacted the underwear industry too. The speed of sewing on a machine enabled manufacturers to increase the variety of corsets they could offer – many of which were covered in strikingly colourful silks – and to sell to less well-off customers.

One further innovation of the 1850s was so effective it literally shaped women's fashion for the next decade. As skirts continued to grow wider still, the usual layers of petticoats were no longer sufficient, and in 1856 the cage crinoline emerged as a viable alternative. Constructed of steel hoops increasing in diameter towards the hem, the cage crinoline was strong enough to support wide skirts without the need for burdensome petticoats. This flexible, lighter crinoline was widely adopted, its collapsible form allowing for improved agility when worn and more compact storage. Sewing machines aided the mass production of cage crinolines at low cost, making them more affordable to a wider audience, and leading to a craze for ever-larger skirts dubbed 'Crinoline mania' by Punch magazine.

Cage crinolines weren't without drawbacks though, as women had to learn how to walk and sit in crinolines without revealing their ankles or underclothes, and those who opted for a more extreme size struggled to navigate narrow spaces. Alarmingly, crinolines were linked to serious accidents around open fires, as larger-than-ever skirts in highly flammable fabrics mixed dangerously with the reduced spatial awareness of a lighter than usual undergarment. Despite these shortcomings, the springy structure was, for most women, preferable to wearing numerous layers of cumbersome petticoats.

With crinolines making the waist look smaller, then flaring out, tight lacing became less pronounced and corsets became fuller around the hips. Stays were sometimes worn over the crinoline and petticoats. The waistline rose up because crinolines were worn around the smallest part of the torso. Other changes included the phasing out of shoulder straps and the widespread use of loop and stud front fastenings as well as back lacing. Centre-front fastening split busks made it much easier for women to dress themselves, so corsetry became more accessible to women who could not afford to employ domestic workers.

After more than a decade in favour, large, bell-shaped skirts reached their peak, and by the 1860s volume began shifting towards the rear. Skirts now featured a flatter front, with a tapered shape emphasising the back of the body. The supporting structures beneath followed suit; cage crinolines became narrower, mirroring fashion's new contours, and the crinolette – or half-crinoline – emerged. This modified version of the crinoline had a flat front with rear half-hoops, eventually replacing the diminished crinoline which fell out of fashion around 1868. Worn from the mid-1860s, crinolettes often featured extra loops of steel at the top to exaggerate the posterior, bridging the gap between the cage crinoline and the full bustle of the 1870s.

The bustle was introduced as a distinct undergarment during the 1870s, supporting skirts which no longer sat over a crinoline, but which were gathered up at the back, projecting out below the waist. Also known as a 'dress-improver', or by its French name 'tournure', the bustle provided a foundation for this new arrangement of skirts via sculpted pleats and ruffles, often stiffened with horsehair. By the mid-1870s skirts narrowed further, and the puff of volume beneath the waist lowered. Volume became less pronounced but more expansive, as skirts developed trains fanning out behind the wearer. Tubular 'waterfall' bustles were used, providing extended support for the rear length of skirts which were now a focus of decoration, cascading down the back of the dress in an arrangement of ruffles, pleats or flounces.

Like crinolettes, some bustles featured internal tapes and ties. These enabled the shape of the structure to be adjusted, but, combined with a flat front and narrow overskirt, movement was noticeably hindered. The bustle was likely more restrictive than the flexible cage crinoline, especially when sitting, forcing the wearer to sit forward in her seat or push the bustle to one side.

After a brief respite, the bustle became fashionable again around 1883. The revived bustle took a far more exaggerated form; steel strips were often attached to the insides of dresses to amplify the curve of the bustle, which jutted out at right angles from the back of the body. Bustles came in all shapes and sizes. Some were constructed almost entirely of steel, whilst others resembled colourful cushions stuffed with horsehair, down and straw. Different styles of bustle were available according to the activity and time of day: small 'tournures' fastened to the corset were recommended for walking; modest 'puffs' provided lift for the early afternoon; and larger, longer bustles were suited to the ballroom.

Bustles could be cumbersome and uncomfortable, yet, as with corsets and crinolines, it is the more extreme examples that drew criticism, and most bustles within the museum's collection are not as enormous as the popular press would have us believe. The 'New Phantom' bustle, patented in 1884, featured a convenient pivot, allowing the steel wires to collapse when the wearer sat down, and open up again when rising.

In the 1870s and 80s, fashionable Victorian corsets continued to be strapless, front and back fastening, moulded and, in terms of appearance, varied and often colourful and decorative. New characteristics included: tighter lacing and a more pronounced hourglass shape – connected to the reduced skirt diameter – and often achieved in part by increasing the number of whalebone strips; spoon busks introduced in the 1870s to shape the stomach and spread pressure more widely; and the 1880s fashion for covering boning with a contrasting fabric, often leather.

In the late 1880s, fashion moved on and the angular, bustled shape was no longer in favour. Instead, a small horsehair pad sufficed, attached inside the skirt to shape the back of the body. Skirts were even simpler and less restrictive by the 1890s, reflecting the growing interest in physical freedom for women connected to the burgeoning 'New Woman' movement – an important strand of turn-of-the-century feminism. Cut in an A-line shape falling from the waist, skirts were liberated from structural aids. They did, however, rely on heavy materials and stiff petticoats, in order to create a defined silhouette. Some women dared to wear controversial 'divided' petticoats and skirts (essentially trousers).

Volume had not, however, disappeared entirely from the fashionable silhouette; it moved to the upper sleeves. Furthermore, with the new straighter silhouette and absence of a bustle, stronger emphasis was again placed on the waist. Some corsets were heavily boned on each side and featured a long straight busk.

Other developments in corsetry were more in line with 'New Woman' thinking, with a variety of reformed corset styles becoming newly available. Dress reformers, whether motivated by concerns about maternity or general health, alternative beauty ideals, or a desire for women to experience greater physical liberty, had been pushing for different approaches to womenswear for decades, with corsetry being a particular focus. But it was only around the 1890s that their ideas started to influence the mainstream. For example, skirts, as discussed, became more practical. Jaeger – established in the 1880s as Dr Jaeger's Sanitary Woollen System Co., Limited – sold many woollen undergarments, based on the German naturalist and hygienist Gustav Jäger's belief in the importance of wearing animal rather than plant fibres next to the skin.

In terms of corsetry, stays with purported health and comfort benefits became a fashion in themselves. Many people, however, were firmly and often very publicly on one side or the other of the dress reform question. Some, for example, enjoyed the feeling of wearing stays and/or viewed reformed garments as unattractive, while others saw a different approach to dress as essential to women's physical and psychological wellbeing. A number of health claims made by reformers appear to have been accurate, but various campaigners seem to have exaggerated or fabricated such arguments.

The garment in the V&A collection stamped 'RATIONAL' Style 444 (a reference to the 'Rational' branch of the dress reform movement that prioritised practicality and health), is an example of a corset that like 'divided' petticoats, departed more radically from contemporary underwear fashion. It is notably plain and unstructured. Gently supportive and with shoulder straps, this corset suggests a return to the kind worn around the beginning of Queen Victoria's reign. The internal stamp showing a woman holding a baby reflects many reformers' fears about fashionable corsetry threatening healthy maternity.

Going further still, some avant-garde women dispensed with stays altogether. This trend would continue, mirrored by certain developments in women's underwear, which continued to mould fashionable body ideals but became less structural in the 20th century. 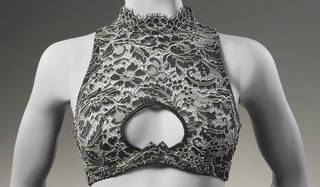