The fashion for producing tin-glazed earthenware tiles – tiles which were covered in a white glaze made opaque by adding tin-oxide – spread from Italy to the Netherlands and eventually to Britain in the 16th century. These tiles were sometimes referred to as 'delftware' in England, as Delft in the Netherlands was a major producer of tin-glazed pottery (although few tiles originated there), and arguably it was the Dutch that perfected the product. By the 18th century, imports of Dutch tin-glazed tiles were so popular in Britain that the English factories, mostly based in London and Bristol, were producing their own rival tiles using new techniques, forms of decoration and distinct regional styles. These English-made tiles can also be known as 'delftware'.

The forerunner to delftware tiles were the heavy floor tiles with bright polychrome (multi-coloured) decoration produced in Europe during the 15th and 16th centuries. They were inspired by a sophisticated and expensive Italian tin-glazed earthenware called 'maiolica', which was only available to the very wealthy and often adorned the private apartments or religious spaces of the nobility. Maiolica tiles were usually painted with bespoke designs, such as the set ordered by the Gonzaga family in the 1490s destined for their palace the Castello di San Giorgio in Mantua, decorated with family emblems and mottoes. Italian potters took these luxury products to other parts of Europe, including Antwerp (then part of the Netherlands), where a thriving maiolica industry developed, laying the foundations for Dutch tile manufacturing.

The use of tiles became more widespread across northern and central Europe from the end of the 16th century. By around 1600, tile production in the northern provinces of the Netherlands boomed, while advances in manufacturing techniques fundamentally changed the way that tiles were designed and used. Tiles became smaller and thinner, making them cheaper and more efficient to produce and transport. This also influenced decoration. Previously the elaborate polychrome designs seen on maiolica floor tiles were imitated by reproducing a repeating pattern over four tiles. However, ornamental decoration decreased so that patterns repeated in single tiles, and the central and corner motifs diminished to show more undecorated white glaze.

There was also a move from using tiles on the floor to using them on the walls due to the vulnerability of the thin layer of tin glaze. Their practicality and increasingly light decoration made them more suitable for areas of the house which were prone to dirt and dampness, such as skirtings, around fireplaces and along corridors. The growing Dutch middle class – who were becoming rich from the products of colonial expansion – were consumers who could newly afford to spend money on building and decorating their houses, and tiles offered a practical and aesthetic addition to their modern homes.

Virtually all polychrome decoration was abandoned from 1625 onwards, when blue and white tiles became the dominant style. Blue and white tiles were influenced by Chinese porcelain, however Chinese motifs rarely appear on Dutch tiles. Almost immediately a distinctive Dutch style developed, which included depictions of soldiers, cavalrymen and scenes from domestic life. Religious scenes from the Bible – both decorative and instructive – were also a very popular motif to line fireplaces and large wall areas, often accompanied by a reference to the Bible chapter and verse from which they were taken.

To reproduce the same decoration on vast quantities of Dutch tiles, tilemakers transferred a drawn pattern on to a tile using a technique called 'pouncing'. This was done once the tile had received its first firing, or biscuit firing, and initial glazing. After this an outline drawn on paper was pricked with small holes and then the paper was laid on the tile and lightly hit with a porous bag filled with charcoal. This transferred the outline on to the tile. This outline was then painted over in a coloured pigment using a fine brush and fired once more. Our collection includes a rare group of 17th-century stencils for Dutch tiles which show this process. Two of the designs were used in the workshop of Pieter Grauda, a potter working in Harlingen, Friesland, in the 1680s – 90s. One shows a figure being transported in a horse drawn carriage, and the other a crowned sovereign being presented a letter – both have pricked outlines from their use as functioning stencils, (known as 'spons' in Dutch).

The first tin-glazed earthenware potteries to appear in England were established by Dutch protestants at the end of the 16th century and tended to focus on the production of 'pavinge tyles' – large maiolica floor tiles such as those produced in Antwerp. These tiles were heavy and expensive to import from Europe, while the tin and clay required for their production could be found in Norfolk and Suffolk. A number of manufacturers began producing bright polychrome tiles in this popular Italian style. It's possible that a tile in the V&A bearing the initials of Sir Nicholas Bacon (1509 – 79), Keeper of the Great Seal to Elizabeth I, is one of few surviving examples of floor tiles made in England at this time.

Dutch tiles were still imported in considerable numbers and British potteries found it difficult to compete with their quality. In 1676 Jan Aries van Hamme, a potter originally from Delft who arrived in London in the 1670s, was granted a warrant to produce "Tiles… after the way practised in Holland". This was a short-lived venture as van Hamme died in 1680. Nevertheless, a group of wall tiles produced around 1679 – 80 depicting the 'Popish Plot', have been attributed to the workshop of van Hamme. The Plot, which concerned a false rumour of a Catholic conspiracy to murder King Charles II, gripped the nation, and many visual representations of the conspiracy were created.

From then on tile production increased in London. By the early 18th century English tiles were considerably cheaper than their Dutch counterparts and produced in a wider variety of designs. However, the quality of Dutch tiles was still apparently unmatched, and in 1718 Thomas Oades, a potter based in Gravel Lane, Southwark, commented on the shortage of skilled labourers in the production of English tiles: "a very beneficial part of the Trade, and not a Man in the Kingdom to be got, that could make them to any purpose". Nevertheless, the industry of tin-glazed earthenware tiles grew rapidly in areas across Britain and by the 1720s most potteries, including those in Liverpool, Staffordshire and the West Country were producing them as standard, with Scotland and Ireland following suit in the second half of the 18th century.

Initially the designs produced by British potteries were very similar to the Dutch source material, but into the 18th century the British introduced a greater breadth of subjects, as well as more inventive border and corner patterns and use of colour. The tiles produced in Bristol in the 1760s and 70s, for example, use a cool blue ground with white opaque ornamental decoration to the corners – a technique called 'bianco-sopra-bianco', or white-on-white – that derived from Italian maiolica of the 16th century. Their centres depict a chinoiserie landscape in a diverse range of colours including blue, red, green, yellow and manganese purple.

In Britain the tendency was to place tiles in areas associated with hygiene, such as surrounding wash-basins, lining baths or in commercial premises. A tile panel depicting St. Mary Redcliff Church in Bristol was probably produced in the nearby vicinity at the Redcliff Back Pottery by Richard Frank. It was set into the wall of a ham and bacon shop in the city, until salvaged by a collector in the 19th century.

One of the most significant innovations in the production of British tin-glazed tiles happened in Liverpool in the 1750s, when John Sadler and Guy Green refined a process of transferring engraved images directly onto tiles using animal glue. This dramatically sped up the decoration process, making the tiles a huge commercial success. The detail of the images was also extremely fine, allowing for scenes of rustic and genteel life and fables, and later neo-classical designs and portraits of theatrical figures that appealed to the wealthier classes.

The demand for tin-glazed tiles in Britain began to falter around the 1770s due to the increasing availability of other more refined products such as porcelain. Chinese blue and white porcelain was imported in huge quantities, and English-made porcelain was produced from the 1740s. Other ceramic products were also becoming more attractive to the wealthier classes, including the perfection of a lead-glazed earthenware known as 'creamware' by the Wedgwood factory from the 1750s. As a result factories producing tin-glazed earthenware began to close and by default the manufacture of tiles dwindled. In the Netherlands, the export of tiles remained strong throughout the 18th century, and spread from Portugal to Finland and as far as Russia. However, with the Napoleonic Wars restricting trade at the beginning of the 19th century, the tile industry suffered a decline it would never fully recover from.

Later in the 19th century, designers like William Morris (1834 – 96) and William De Morgan (1839 – 1917) revitalised interest in Dutch tiles. Morris used blue and white Dutch tiles to decorate areas in his home, Red House, in Bexleyheath. Morris and De Morgan also invested commercially in the Dutch tile market by buying in glazed and fired blank tiles from the Netherlands on which to produce their own designs. But still, revivals of Dutch and British tile production remained modest, and the decorated tin-glazed earthenware tile would never again reach the quality and popularity of its heyday in the 17th and 18th centuries. 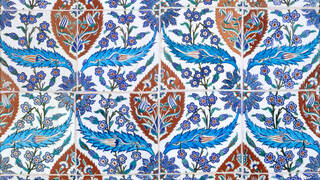