The V&A holds the only document detailing the full extent of the Nazis' systematic purging of German museums and public collections from 1937. Created at the heart of the Nazi regime by Joseph Goebbels' Ministry of Propaganda, the document records the confiscation of more than 16,000 works of art which the Nazis deemed 'degenerate'. A selection of the seized paintings, drawings and sculptures was shown at the infamous 'Degenerate Art' exhibition, which opened in Munich in 1937 and subsequently toured across the Reich.

The document details the confiscations themselves, and it also sheds light on how the Nazis extracted value from the art they despised: artworks were sold abroad to raise funds for the regime or were exchanged for objects that did not violate the Nazis' aesthetic sensibilities. Most of the remaining works of art were destroyed in a bonfire held in the courtyard of the Berlin fire department, echoing the public burning of books in 1933 that were considered to be incompatible with Nazi values.

As the only known copy of a complete inventory of ‘degenerate art’, this document is an indispensable resource for provenance researchers and anyone interested in the history of the Nazis' 'Bildersturm' (iconoclasm). It provides crucial information not only about the artists and works singled out by the regime, the museums and collections that were permanently altered by these purges, but also about the 1937 Degenerate Art exhibition itself. It allows us to chart the dispersal of the looted objects to collections all over the world and to remember those works which were lost to the flames.

In 1928, Paul Schultz-Naumburg, an architect and Nazi activist, published his book Kunst und Rasse (Art and Race), which summarised the worldview that underlay the Nazis' campaign against 'degenerate art'. It applied the 'racial science' of the day to the art world, establishing a disturbing connection between artistic expression and mental or physical disabilities, both of which were supposed to be eradicated from the 'racial community'. According to this perspective, all artworks inherently mirrored the racial quality of the artists themselves. This meant that artists considered racially healthy would produce art that celebrated and furthered the advancement of the German race as a whole. By extension, individuals with mental or physical 'defects' were thought to be capable only of producing art that mirrored their 'racial deficiencies'.

To forcefully drive home this point, Paul Schultze-Naumburg juxtaposed photographs of disabled individuals with modernist art to demonstrate that they were both ultimately the outcome of negative hereditary traits and were symptomatic of a 'racial degeneration' which had to be curtailed. If such art implicitly celebrated the degeneration of the German race, then, in the Nazis' view, its promotion could only serve the interests of those seeking to undermine the 'racial community' as a whole. The chief culprits were thought to be Jewish art dealers and critics who used their allegedly disproportionate influence to harm the community, aided by wayward Germans seduced by their money and influence.

After the Nazi seizure of power in 1933, Germany's new rulers organised so-called 'Schandausstellungen' (condemnation exhibitions) across the Reich; these would ultimately serve as the blueprint for the 1937 Munich exhibition. The exhibitions, which had titles such as Schreckenskammer (Chamber of Terror), Kunst im Dienste der Zersetzung (Art in the Service of Subversion) and Entartete Kunst (Degenerate Art), were united by a common theme: they denounced works of art which were interpreted as an attack against the German people and as symptoms of a cultural decline inextricably associated with liberal democracy. The exhibitions argued that this art had been nurtured by those politicians who had betrayed Germany by signing the Versailles Treaty (the peace treaty that ended the First World War), condemning Germans to a life in servitude to outside forces, and who had thereafter promoted utterly destructive social and cultural trends. Many of the artworks displayed in these early exhibitions would later be confiscated in 1937, recorded on the inventory, and displayed in the Munich exhibition of Degenerate Art. Such pieces included Otto Dix's anti-war paintings that depicted the gruesome reality of trench warfare and the emotionally and physically crippled veterans it produced. These were denounced as an attack on the honour of the German soldiers and an assault on their heroic memory.

Another tactic, which would also be employed in the 1937 exhibition, was to juxtapose this 'degenerate' art with pieces which did not violate the Nazis' aesthetic sensibilities. These were artworks from a time before the cultural rot was said to have set in, or which were composed by artists seen to have resisted its poisonous temptations. Some of these works would feature in the Deutsche Kunstaustellung (German Art Exhibition) which took place only a short walk away from the Degenerate Art exhibition in 1937, inviting visitors to compare the 'best' and 'worst' the art world had to offer.

On 30 June 1937, Joseph Goebbels, the Reich Minister for Propaganda and Enlightenment, authorised the Director of the Reich Chamber for Culture, Adolf Ziegler, to select and confiscate paintings and sculptures from public collections for a major exhibition on 'degenerate art'. Ziegler promptly assembled a commission which would include Wolfgang Willrich, whose book, Die Säuberung des Kunsttempels (The Cleansing of the Temple of Art), was a major inspiration for Goebbels. It essentially provided the blueprint for the selection of artworks which would be taken from museums and galleries for the 1937 exhibition. Willrich's book was a vicious attack against modernist artists and the art establishment which had enabled their assault against the 'German spirit'. As the title of the book suggests, he called for a cleansing of the 'Temple of Art' which, he argued, should be reserved for art designed to promote the wellbeing of the Nazi 'Volksgemeinschaft' (People's Community). For this purpose, he provided a list of names of artists whom he deemed guilty of promoting degeneracy and whose work would then fall victim to the confiscations. Over the course of a mere ten days, the commission combed through 32 collections in 23 cities to select works of art which were seen to threaten the new order the Nazis sought to cultivate. These artworks were shipped to Munich, the capital city of the Nazi movement and the official 'City of German Art'.

On 19 July 1937, the Degenerate Art exhibition was opened in the Archaeological Institute of Munich. Ziegler, who had overseen the confiscations of the works now on display, made the opening address, in which he left no room for doubt as to how the artworks should be interpreted: "Look around you at these monstrosities of insanity, insolence, incompetence and degeneration". Prior to the examination of the inventory in the V&A's archives, the exact layout and composition of the exhibition was unclear. We are now able to reconstruct the ideological path down which visitors were led.

The journey began with Emil Nolde's Christus und die Sünderin (Christ and the Sinner), hung in a room devoted to imagery said to violate Christian sensibilities. The second room was devoted to the theme of the 'Revelation of the Jewish Racial Soul' and featured paintings, prints and drawings by Jewish artists, a prominent example being Rabbiner by Marc Chagall. The third room featured nudes, the nature of which was summarised as the 'Mockery of the German Woman as Cretin and Whore!' The same room also featured the anti-war paintings of Otto Dix which had been displayed in Dresden in 1933 and which were seen to disrespect the honour of German soldiers and veterans. The room also held an ensemble of Dada art, which was particularly despised by the Nazis for its intentional irrationality.

The exhibition drew large crowds and would go on tour throughout the Reich. Later incarnations contrasted modernist art with paintings and drawings made by patients in Heidelberg's psychiatric hospital in order to hammer home the connection between biological and artistic degeneracy.

The Degenerate Art exhibition was a stone's throw away from the monumental Haus der Deutschen Kunst (House of German Art), an imposing structure purpose-built to showcase works of art deemed to promote the values of the Nazi regime. The day before the Degenerate Art exhibition opened its doors to the public, Hitler had officially inaugurated the German Art Exhibition, showcasing those works selected by a commission tasked with finding the very best the Reich had to offer.

In his opening speech, Hitler made clear the extent to which the art in this exhibition was defined by its stark contrast to the 'degenerate' pieces in the neighbouring gallery. He explained that what was on display there had "nothing to do with us". Instead of paintings denouncing the gruesome and senseless nature of the recent war, the invited guests could admire paintings invoking comradeship and heroism. Instead of images of prostitutes, they could appreciate paintings and sculptures celebrating motherhood. Instead of meaningless abstract paintings, here they could enjoy the beauty of naturalistic landscapes. And, instead of disturbingly disproportionate sculptures, they could feel inspired by sculptures which followed the time-honoured principles of antiquity.

In his opening speech at the German Art Exhibition, Hitler had announced a "ruthless war of cleansing against the last elements of our cultural decomposition". Goebbels decided to use this opportunity to finish the job and clear out the remaining unacceptable artworks that had been missed in the initial sweep. The museums were informed that Adolf Ziegler would now confiscate "the remaining products from our period of decay". This time, the screening process did not have to be rushed, but aimed to be truly comprehensive.

The commission, which now had additional members, visited over 100 museums in 74 cities and confiscated approximately 16,000 works of art. These works of art were shipped to a grain silo in Berlin Köpenick, where they were inventoried on index cards. The next step was their 'liquidation': if they could not be shown in Germany outside the context of 'shaming exhibitions', they could yet be sold abroad to generate cold, hard cash for the Nazi regime. The inventory reveals how this cynical process unfolded: they were sold through art dealers trusted by the regime, or they could be exchanged for the kind of racially appropriate artworks displayed in the German Art Exhibition (such cases were indicated on the inventory with a 'T', for 'Tausch', meaning 'exchange'). Artworks which could not be liquidated in this manner were simply destroyed.

In March 1939, the Propaganda Ministry had around 5,000 artworks burned in the courtyard of the Berlin Main Fire Department. It can therefore be assumed that the list in the V&A was created as a final document providing an overview of the outcome of the 'Cleansing of the Temple of Art'. As such, it stands as a memorial for a museum landscape that would never be the same again. The 'liquidation' ended in July 1941.

As Heinrich Heine, the German poet, once poignantly remarked, "Wherever they burn books, they will in the end burn human beings too". Indeed, the inventory invites us to think not only about the artworks, but also about the persecution of the artists who created them.

The case of Elfriede Lohse-Wächtler (1899 – 1940) draws into focus the terrible consequences of the worldview that lay at the heart of the Nazi comparison of modernist art with mental degeneration. In 1929, she suffered a nervous breakdown and was admitted to the psychiatric hospital in Friedensberger, where she continued to make drawings and to paint watercolours, many of which depicted her fellow patients. In 1932, doctors in the psychiatric hospital in Arnsdorf diagnosed her with schizophrenia. Two years later she was forcibly sterilised at the Municipal Hospital in Dresden.

In 1939 the Nazi regime began to systematically murder the mentally and physically disabled throughout the Reich. Elfriede Lohse-Wächtler was gassed in the Pirna sanatorium and nursing home. Her story, which was far from unique, serves as a powerful reminder of the painful human realities hidden within the deceptively colourless pages of a bureaucratic document. 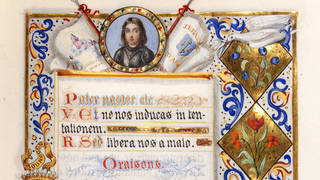