If you want a golden rule that will fit everybody, this is it: have nothing in your houses that you do not know to be useful or believe to be beautiful.

The Aesthetic Movement in Britain (1860 – 1900) promoted the concept of beauty over any deeper meaning – 'Art for Art's sake'. As these ideas became increasingly popular, many of the leading firms making furniture, ceramics, domestic metalwork and textiles courted artists and professional product designers such as Lewis Foreman Day, Bruce Talbert and Christopher Dresser. Coinciding with a period of expansion of domestic markets, the Aesthetic style was among the first to be commercially exploited. This commercialism was helped by a large number of publications issued around this time, which were aimed at raising awareness of beauty in the ordinary home. Directed at the would-be fashionable middle-classes and homeowners with 'artistic' aspirations, throughout the 1870s and '80s a constant stream of written advice and illustrative material appeared in the form of books on taste, design manuals, trade catalogues and pattern books.

Wallpaper became an essential feature of the Aesthetic interior, thanks largely to its revitalisation by the celebrated designer William Morris. Following the advent of mechanisation, an increase in wallpaper production had seen a deterioration in the quality of its design. Unable to find any he liked well enough to use in his own home, Morris set about designing a series of papers that adopted a radical new naturalistic take on pattern. His most best known designs, such as 'Jasmine' (1872), have two interwoven layers. This kind of delicate layered foliage pattern was to become a standard of Aesthetic wallpaper design.

Morris believed that wallpaper was integral to interior decoration, and advised "think first of your walls". At first Morris' wallpapers were dismissed as 'too peculiar', but they were soon taken up by a progressive 'artistic' circle, and by the 1870s they were being recommended in guides to home decorating.

Wallpaper design evolved to include a three-way division of the paper, with each area adopting a particular pattern. The lower part of the wall, above the skirting board (dado) was often geometric, or divided into pictorial panels; the area above this (the filling) would generally contain a light floral or foliage pattern; the section nearest to the ceiling (frieze) would have a bolder floral or pictorial motif. Aesthetic motifs came from many different sources – medieval, chinoiserie, Japanese – and typically used reddish-pinks, greenish-blues and olive. This new wallpaper design became a distinctive feature of Aesthetic decorative schemes, though some – including Morris – disapproved of the 'busyness' of such walls.

Aesthetic textiles were characterised by stylised floral, oriental and historically-based designs, using motifs such as birds, butterflies, lilies and sunflowers, peacock feathers symbolising the rare and exotic, and almost anything 'Japanese' – as was the Movement's obsession with 'exotic' Japanese forms.

The designer Arthur Silver established his own company, Silver Studio, in Hammersmith, London in 1880, producing designs for textiles and wallpapers which he sold to clients including the famed department store Liberty & Co., in London. His printed cotton peacock feather design for Liberty remains a key Aesthetic piece.

Retailers were crucial to the diffusion of Aesthetic objects and ideas. The most influential was Liberty & Co., founded in 1875, which did a huge trade in soft silks imported from India. These silks were considered perfect material for the looser, unstructured and simple style of Aesthetic clothing, as seen in Liberty's blue silk dress, with its subtle shades and unembellished design. Liberty pioneered the idea of the store where all elements of an Aesthetic lifestyle could be found.

A key theme of the Aesthetic interior was the filling of all available spaces in the home with furniture that was decorative and functional. From the 1860s influential writers, including Charles Eastlake and Robert Edis, and designers such as E.W. Godwin, B.J. Talbert and Christopher Dresser, promoted design reform in furniture for practical as well as artistic reasons.

Aesthetic furniture was distinguished by its flat rather than raised decorations, straight or only slightly curved legs, light frames for small tables and chairs, and small wheels (castors) to add extra mobility. Ebonised (darkened wood with an appearance similar to ebony) and coloured finishes – a distinguishing characteristic of 'art' furniture – was seen to promote hygiene in furniture associated with eating and drinking.

Any available wall space, including the formerly neglected corners of rooms, was used to position furniture, such as hanging cabinets, shelves, mirrors and clocks. Also innovative at the time was the introduction of the overmantel, an ornamental structure over a mantelpiece. These were made of painted or stained wood and fitted with shelves and brackets, mirror glass, tiles or ceramics.

Combination pieces of bedroom furniture, which offered multi-purpose functions and space-saving advantages, were also a feature of Aesthetic furniture from the late 1860s.

The late 19th century saw a dynamic and experimental period of ceramics production. This was encouraged by artists and designers, such as James McNeill Whistler and Dante Gabriel Rossetti, that regarded ceramics as integral to the creation of the artistic home.

Both Minton and Doulton, giants of ceramics industry, established art pottery departments to meet the growing fashion for 'art' wares, and smaller ventures, such as that of William De Morgan, produced some of the most distinctive works of the period.

By the 1870s so many historic styles in ceramics production had been revived that designers could adopt an eclecticism that was as liberating as it was overwhelming. What evolved was a 'motifism' that allowed mass producers to create objects using popular Aesthetic images, such as peacocks, owls, fans and sunflowers. It also also enabled designers to take inspiration from different sources and create pieces that appeared fresh and daring.

Aesthetic ceramic style also has a sense of humour. Christopher Dresser's designs for Minton used a 'semi-humorous' tone, while Doulton championed personal creativity and experimentation. The intention of much ceramic work was clearly to make people smile and, together with its affordable and practical nature, was the perfect means of expressing personality in the home.

The story of Aesthetic ceramics is also one of the expanding role of women in the ceramic industry. The establishment of Minton's Art Pottery at Kensington Gore, and the Lambeth factory of Doulton & Co., provided a critical London base where, away from the conservatism of Staffordshire, women were able to play an active part in the design process and achieve fame and credibility as designers. Mary Capes was one of the many decorative artists who worked at the Doulton studio. Between about 1876 and 1883 she developed a technique for painting in enamel colours on stoneware.

As with other decorative arts of the period, Aesthetic metalwork borrowed its influences from a variety of sources, including Gothic Revival, naturalism and a Western interpretation of the arts of Japan.

As well as designing the Red House – William Morris' private residence and significant Arts and Crafts Building – the architect Phil Webb also designed and supplied many of its furnishings, including a pair of copper candlesticks. The clear geometric quality of their work, characterised as Reform Gothic, distinguished it from the earlier Gothic revivalists and anticipated the new decorative vocabulary of the Aesthetic Movement.

Christopher Dresser's contribution to the 19th-century decorative arts was truly original and innovative. At the peak of his career in the late 1870s, Dresser was dealing in Japanese and other oriental imports, while his busy design studio supplied designs for silver and plate manufacturers.

Thomas Jeckyll ran a successful architectural design practice in both Norwich and London. His early work was mainly in the Gothic style but following his move to London in 1858 and his introduction to the so-called Chelsea Aesthetes, who included Rossetti, Whistler and Godwin, his artistic direction changed.

In 1859 he began a long and fruitful association with the Norwich brass and iron foundry Barnard, Bishop & Barnards. His 'Vienna Gates', manufactured by Barnards, were admired for their combination of naturalistic scrollwork with Japonisme animal forms when they were displayed at the 1867 Exposition Universelle in Paris.

Jeckyll's other major success with Barnards was his range of designs for the front panels of their revolutionary and hugely successful slow-burning combustion fireplaces. Jeckyll started production of these panels, which came in all shapes and sizes and incorporated Japanese designs, in 1873. They were very popular, with distinguished architects such as Norman Shaw and Christopher Dresser incorporating them into their buildings.

Jeckyll also designed the Japanese pavilion for the Philadelphia Centennial Exposition of 1876, which was subsequently re-erected at the 1878 Exposition Universelle in Paris. This remarkable pagoda-like structure of cast and wrought iron included a decorative scheme of Japanese ornament with naturalistic elements from English flora and fauna. One of its most striking features was the ground-level railing composed of rows of wrought-iron sunflowers. This feature alone helped to confirm the image of the sunflower as one of the emblems of the Aesthetic Movement. 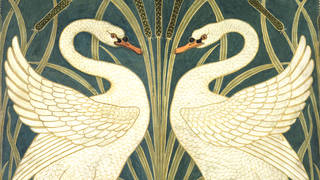 Visit the shop
Background image: Anglo-Japenese furniture designs, Edward William Godwin, about 1875, England. Museum no. E.482-1963. © Victoria and Albert Museum, London
We use cookies to enhance your experience on V&A websites. Read our cookie policy to find out more.