Commissioned especially for the V&A in collaboration with the charity Fine Cell Work, the HMP Wandsworth quilt explores creativity in confinement, drawing on a tradition that goes back to the 19th century.

Founded by Lady Anne Tree in 1997, Fine Cell Work is a charity which teaches needlework skills to prison inmates, employing inmates in prisons around England and Scotland to produce high quality cushions, tapestries, quilts and other sewn goods. The inmates carry out their needlework while confined to their cells, a productive and creative use of hours of confinement. As well as gaining skills and independence, prisoners are paid for their work, allowing them to save for their release.

The quilt commissioned for the V&A was both sewn and designed by inmates across the prison estate of HMP Wandsworth – the biggest prison in London and one of the two largest in Europe. The aim of the quilt was to convey the experience of incarceration through stitch – both individual and collective responses to 21st-century prison life.

The cottons and wools used are the same colour and weave as the inmates' uniforms. Each prisoner involved in the commission had the opportunity to design and stitch their own hexagon, making each one an example of individual self-expression. These were then pieced into the larger template of the quilt, which is based on HMP Wandsworth's panopticon design (all cells are arranged around a central well, from which prisoners can be observed at all times). The diversity of subject matter across the hexagons reflects personal stories and communal issues, as well as commenting on the prison system itself.

Explore the quilt in detail by clicking on the pins below

The HMP Wandsworth quilt draws on a longstanding affiliation between confinement and creativity. While restricting physical movement, prisons, workhouses, internment camps, hospitals and asylums have long been the site of great imagination and industry. Furniture making was promoted in 19th-century Parisian prisons, while in the late 19th and early 20th century, British officials in India installed looms in several prisons to produce carpets and textiles.

Social reformer Elizabeth Fry (1780 – 1845) championed the teaching of needlework in 19th-century prisons as both a useful skill and something that allowed for contemplation. Fry promoted patchworking for the female inmates of London's Newgate prison, describing it as "an exceptional mode of employing the women, if no other work can be procured for them".

Fry was also instrumental in persuading prison authorities of the motivational benefits of paid employment, a precedent for today's needlework initiatives:

Some remuneration for their work, even during their continuance in confinement, will be found to act as a powerful stimulus to a powerful and persevering industry.

Fry's thinking was echoed elsewhere. John Francis Maguire, Mayor of Cork, published a text in 1852 that aimed to highlight "the advantages of industrial employment in public institutions, especially those intended for purposes of reformation". On Cook County Gaol, he wrote:

From 1847 up to this year, the inmates have made every article required for their own use, and that of the institution; including male and female clothing of all kinds, in linen and woollen fabrics; bedding, ticken [sic], canvases, blankets, &c"

The result, according to Maguire, was "the good order of the gaol and the improved conduct of its inmates".

A rare surviving example of patchwork produced under conditions of confinement is the Rajah Quilt, now in the collection of the National Gallery of Australia. This quilt was made by some of the 180 women prisoners on board the Rajah convict ship during their transportation from Britain to Hobart, Van Diemen's Land (present day Tasmania) in 1841. It's thought that up to 29 convict women may have worked the quilt and that it may have been produced under the guidance of Miss Keiza Hayter, who had been given free passage with the understanding that she dedicated her time to the improvement of the prisoners.

While it's unusual that the Rajah quilt survived, there are records that others were produced under similar conditions. For example, a convict who had been transported on the Brother in 1823 wrote to Elizabeth Fry, recording that she used the patchwork quilt that she had made on her bed, while a surgeon on board the Princess Royal, another convict ship bound for Australia, noted that many of the female transportees made patchwork quilts, some of which were left behind on the ship.

Many of the men who worked on the HMP Wandsworth quilt described the physical and emotional benefits of stitching. The quilt was created in the knowledge that only the very best would be selected and that the finished quilt would be temporarily on public display, before becoming part of the Museum's permanent collection. As one participant noted, "perfection is not usually what's expected in prison".

The finished product will be the work of many hands. We are working together, showing each other colours, commenting on each other's work. It gives you a purpose to relate to other people. It's difficult talking to strangers but if you can do it with a reason it helps. You can learn from other people and teach them something as well. You feel you've advanced your knowledge and experience.

Contributor to the HMP Wandsworth quilt

The experience of making the commission is articulated by the inscription on the quilt itself, written and stitched by the contributors to the quilt:

The Wandsworth quilt, commissioned by the V&A, is the work of many hands.

It has given us the opportunity to discover our creativity.

This work not only gave us great pride but also purpose while we are serving our time.

We used our surroundings and feelings to come up with the ideas for the patches that go to make up the quilt.

The stitching has kept us busy and has given us confidence, friendship and a sense of achievement.

Makers of the HMP Wandsworth quilt 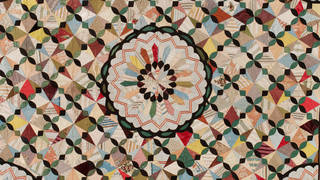