Complementing the V&A’s exquisite jewellery collections is a selection of drawings for jewellery designs. The museum began acquiring these in 1877, with three books of ‘Italian drawings for metalwork and jewellery’ dating from the 1600s.

Since then the collection has grown to over 3000 drawings that span from the late 1500s to contemporary designs for pieces in steel and plastic. These drawings provide us with an insight into the process of making jewellery – from initial sketched ideas, to detailed presentation drawings. They also shed light on the relationships between designers, manufacturers and their customers. Here are some of the highlights from our collection.

The earliest group of jewellery design drawings in the collection is an album made by the merchant and jeweller Arnold Lulls. Born in Antwerp, Lulls moved to England around 1585 and became a supplier of jewellery to the royal court. The intensely detailed drawings are mostly of pendants, earrings, and brooches. The album also contains handwritten notes that list commissions by the royal court and jewels supplied for court gifts, giving us an important historic record of courtly life. Lulls further writes about business partnerships, the quality of gemstones and market difficulties. One page even details the mechanics of a jeweller’s lens. The album is a fascinating snapshot of the jeweller’s trade in the 16th Century.

‘The Brogden Album’ contains 1,593 unique jewellery designs dating from 1848 – 84 and forms an invaluable record of one of the most celebrated 19th-century English jewellery manufacturers, John Brogden (1820 – 84). Brogden started an apprenticeship with the jeweller J.W. Garland in 1834 and then went into a partnership with J.H. Watherston before starting his own firm in 1865. Brogden’s firm was known for its craftsmanship and skill in creating a range of fashionable styles; as seen in this gold and enamel earring bearing a cameo of an ancient mask, designed by Charlotte Isabella Newman. Newman trained at the South Kensington Art School and worked for Brogden from the mid-1860s to 1884. The finished earrings, along with a matching necklace, were exhibited at the International Exhibition, Paris in 1867 and are now part of the V&A’s collection.

In 1955 the museum acquired an album of over 500 designs, mostly for jewellery, by the Arts and Crafts designer Henry Wilson (1864 –1934), given to us by his daughter Orrea Pernel. Wilson originally trained as an architect but took a keen interest in metalwork in the 1890s. By 1901 he was teaching the subject at the Royal College of Art and went on to publish the practical manual Silverwork and Jewellery in 1903. The designs in this album span Wilson’s career from 1897 to 1912 and show his whole working process, from initial sketches to detailed notes on exactly how stones should be fixed. It also has examples of design techniques such as ‘pricking out’ – a common method for reproducing drawings. Holes are pricked along the lines of the original work through which a coloured powder is pushed, faithfully reproducing the image on a new surface, as required.

Pieces of jewellery are not only designed as objects of beauty and adornment but can also be activist objects that express deep personal, social and political concerns. This brooch ‘Peeling off the bitter rind’ was designed and made in 1993 by the American jeweller, activist and teacher Keith Lewis (b. 1959). It is one of a series of brooches he designed in the mid-1990s in response to the AIDS crisis, confronting the anguish of survivor guilt.

The finished brooch shows a stylised, reclining torso with a wound of torn skin which has been slashed by a vegetable peeler concealed behind its back. The silver-gilt skin is dotted to resemble citrus rind, while the jagged wound reveals rough, dark, metal innards. In his design for the brooch the figure is shown in an entirely different pose. Far more of the skin has been peeled away and the peeler is brandished over the figure’s head. By altering the pose, Lewis completely changes the emotion in the piece from one of violent anguish to dismay and shame.

Occasionally design drawings will be acquired by the museum with the finished piece of jewellery. However, unless a piece comes directly from the jeweller, these drawings are usually collected separately. One of the more satisfying aspects of our work is discovering original drawings for completed jewels in our collections. These drawings give us a fascinating insight into the evolution of designs into finished pieces.

Jewellery designs in the V&A collections 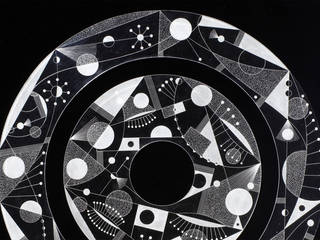