A jogakbo is a style of patchwork, traditionally used to create domestic wrapping cloths (known as bojagi) from scraps of left-over fabrics. The art of making wrapping cloths has enjoyed a long history in Korea. During the Joseon dynasty (1392 – 1910), women, living in a male-dominated society and excluded from formal education, concentrated on domestic tasks such as weaving and embroidery. They produced costumes, beddings, and wrapping cloths for the whole household. Following the ideas of frugality and simplicity advocated during the dynasty, the left-over fabrics were not discarded, but would be used to create a jogakbo by patching those scraps together into larger squares or rectangles.

A jogakbo is comprised of scraps of one type of fabric, such as cotton, silk or ramie (a plant fibre native to eastern Asia which has a particularly lustrous appearance), hemp or even paper. The scraps are sewn together using a triple-stitched seaming technique known as gekki, which results in a sealed, flat seam and gives the jogakbo their distinctive 'window pane' appearance. Patches are joined into squares and extended in an irregular, improvisatory fashion until a cloth reaches the required size. The jogakbo can include several colours composing a modern abstract pattern, or be made of one single-colour, as seen in an elegant piece in our collection dating to the 1940s.

More recently, Korean textile artist Chunghie Lee has applied the jogakbo style to different components of a hanbok, the traditional Korean clothing. The woman's ensemble in our collection is composed of a jeogori, a jacket recognisable by the plain collar, short body and curving sleeve shape, and of a baji, a pair of loose-cut, relaxed trousers, replacing the habitual chima, the wrapping skirt. They feature bold areas of block colour – the fuschia-pink waistband and green, silk gauze jacket front – which contrast with colourful areas of patchwork executed in the traditional jokagbo style.

Also in our collection is a pair of decorative shoes by Chunghie Lee, made of multi-coloured geometric patches of stiffened silk gauze (sa and ra), sewn in the jogakbo style. With their upturned toes, they reflect the style of traditional Korean shoes (taesahye) worn by upper class men during the Joseon dynasty.

Lie Sang-Bong is another innovative Korean fashion designer who draws inspiration from traditional Korean textiles, as well as folk painting and calligraphy among others sources. In his Organza origami dress, Lie deconstructs the traditional jogakbo and reconfigures its 'scraps' of fabrics into a crisp, structural dress with bold graphics that wraps the wearer's body. His edgy yet feminine silhouette combines tradition and modernity, illustrating how jogakbo continues to be a source of inspiration today. 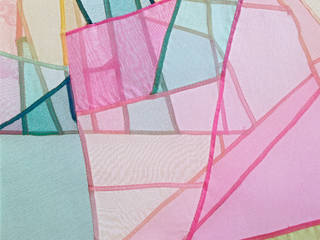