The Victorian artist John Tenniel (1820 – 1914) is most famous for his vivid illustrations for the books 'Alice's Adventures in Wonderland' (1865) and 'Through the Looking-Glass, and What Alice Found There' (1871), written by Lewis Carroll. While these iconic illustrations continue to inspire amusement, wonder and creativity for readers around the world, there was more to Tenniel than 'Alice'.

Spanning more than 50 years, Tenniel's artistic career was fascinatingly varied. He was renowned for his work as a long-standing political cartoonist for the satirical magazine Punch, as well as completing commissions for the V&A (then the South Kensington Museum). His intelligent, detailed style elevated the fame and standing of cartoonists immeasurably.

John Tenniel began his career by studying fine art at the Royal Academy of Arts in London. He faithfully copied sculpture, illustrations from books of costume and heraldry, and scenes of live performance. He had a gift for depicting movement – being the son of a fencing and dancing master – but his true talent was his photographic memory that made it easy for him to caricature and repeat familiar faces.

Tenniel would often sketch from life and found inspiration in the dramatic gestures of stage performers. His passion for theatre can be seen in his drawing of a scene from the opera Maritana, which premiered at the Theatre Royal Drury Lane, London in November 1845.

He was also known to 'tread the boards' himself, appearing in 'benefit' performances, which donated proceeds to a specific charitable cause. A photograph in the V&A's collection shows Tenniel (back row; third from the right) in a performance of A Sheep in Wolf's Clothing at the Adelphi Theatre in 1866. This was staged to raise funds for the family of the recently deceased artist Charles H. Bennett, a colleague of Tenniel's at Punch magazine. It also starred composer Arthur Sullivan, actress Ellen Terry, author and cartoonist George du Maurier and dramatist Tom Taylor.

Tenniel grew frustrated with fine art early in his career and concentrated his talents on other mediums. His first book illustrations were completed in 1842 for The Book of British Ballads, and he went on to complete work for Gordon Knot (1860), Lalla Rookh (1861) and The Ingoldsby Legends (1864). In 1864, Tenniel became Principal Cartoonist for Punch. He was hired on the strength of his illustration work, particularly for Aesop's Fables (1848), and quickly became one of their most prolific contributors.

It was Tenniel's theatrical, detailed caricature work for Punch that caught the eye of Lewis Carroll. Carroll had originally drawn his own illustrations for the first 'Alice' manuscript, but recognised the need to engage a professional artist for the published version. Like Carroll, Tenniel had an exceptional eye for detail, and the two struck up a collaborative relationship. On a proof for an illustration for Looking-Glass, now held in the V&A collection, Tenniel notes: "A little bit off eyebrow. Eyebrow & eyelid lighter. Eyelash – a little too long. Clear away a line on nose next to cheek. A little bit more light on end of nose."

Carroll's text was often light on description, and Tenniel invented his own characterisations, drawing from a vast range of sources, including fine art, natural history, heraldry, caricature and his previous work for Punch. Once committed to paper, the now famous illustrations were carved into woodblocks by engravers, and electrotype copies made to be used by the publishers Macmillan for printing. The praise from critics and readers following publication was unanimous.

In 1893 Tenniel was knighted for his services to the arts, becoming the first cartoonist to receive the honour. By the time he retired from Punch in 1901, he had completed over 2,000 cartoons for the publication, creating some of the most iconic satirical commentary of the 19th century. His retirement banquet was attended by figures across politics, law, literature, science, society and art, including authors Bram Stoker and Sir Arthur Conan Doyle, and was chaired by then leader of the House of Commons Arthur Balfour.

Tenniel died on 25 February 1914, but his influence on illustration and satire continues to be felt. He has also had a long-lasting impact at the V&A. In the 1860s, the first director of the museum, Henry Cole, invited contemporary practitioners to immortalise great classical artists in a mosaic called 'Kensington Valhalla'. It was a symbolic unification of the fine and applied arts, celebrating craftsmanship alongside traditional artistic practice. Tenniel's portrait of Leonardo da Vinci can still be seen in the V&A's Lydia and Manfred Gorvy Lecture Theatre, one innovator paying homage to another. 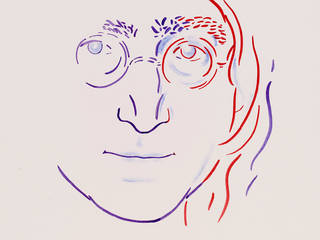 Visit the shop
Background image: Proof for 'Through the Looking-Glass, and What Alice Found There', illustrated by John Tenniel and engraved by Dalziel Brothers, England, 1871. Museum no. E.2829-1901. © Victoria and Albert Museum, London