Born in Russia in 1866, Léon Bakst belonged to a young generation of European artists who rebelled against 19th-century stage realism, sparking a revolution in theatre design. His fame lay in the sets and costumes he designed for Serge Diaghilev's (1872 – 1929) legendary dance company the Ballets Russes, and his huge pageant spectaculars for the dancer and patron of the performing arts, Ida Rubinstein (1883 – 1960).

Bakst was interested in the visual arts from an early age. At the age of 12, he won a drawing contest and decided to be a painter, later studying at the St Petersburg Academy of Arts, and working part time as a book illustrator. In the 1890s he travelled in Europe and became a member of the artistic circle formed by the artist and critic Alexandre Benois (1870 – 1960), who introduced him to Sergei Diaghilev, a promoter of Russian visual and performing arts. In the late 1890s Bakst showed his works in a number of exhibitions organised by Diaghilev. At the time there were no specially trained theatre designers, so Bakst was one of several painters (like Édouard Vuillard in France, and Edvard Munch in Scandinavia) who turned their skills to theatre design. He began to design scenery in the early 1900s and in 1909 he went to Paris, where he designed stage sets and costumes for Diaghilev's newly formed ballet company.

"It is goodbye to scenery designed by a painter blindly subjected to one part of the work, to costumes made by any old dressmaker who strikes a false and foreign note in the production; it is goodbye to the kind of acting, movements, false notes and that terrible, purely literary wealth of details which make modern theatrical production a collection of tiny impressions, without that unique simplicity which emanates from a true work of art".

Bakst came to the ballet on the wave of a revolution instigated by the Russian choreographer and dancer Michel Fokine (1880 – 1942). Fokine had been invited by Diaghilev to be resident choreographer of the Ballet Russes' first Paris season. Fokine rejected the formal mime and virtuoso dances of classical ballets such as Swan Lake (first performed in Moscow in 1877), with ballerinas dressed in pink satin shoes and tutus regardless of the subject or setting.

In Fokine's ballets, the theme dictated the style of the choreography, music and design; and the dancers' steps were charged with meaning and emotion. As part of the Ballets Russes' very first programme in Paris, Bakst designed oriental-style decor and costumes for Michel Fokine's Egyptian themed ballet Cleopatre (1909). His dramatic, innovative designs emphasised colour, violence and sensuality, energising the ballet's exotic and fantastical subject matter and characters.

This 'new ballet' intoxicated Paris in 1909, when audiences went wild for their energy, colour and exoticism, especially in the ballets designed by Bakst. His depth of knowledge and feeling about period and place allowed him to absorb the spirit of a culture and translate it into theatrical terms. As part of Fokine's creative team, Bakst produced bold, sumptuous design concepts for subsequent ballets: Ancient Greece in Daphnis and Chloë and Narcisse; European Biedermeier style (a transitional period between Neoclassicism and Romanticism) in Carnaval and Spectre de la Rose; and 18th-century style in The Good-Humoured Ladies and The Sleeping Princess.

Scheherazade, performed in 1910 at the Théâtre national de l'Opéra in Paris, featuring the dancers Vaslav Nijinski and Ida Rubinstein, proved a particular sensation, creating a sense of rich, fevered claustrophobia and mystery – a living canvas of sensuality and decadence. Bakst gained international fame for his celebrated designs, and came to be regarded as the artistic director of the Ballets Russes during their heyday (1909 – 14).

Bakst was remarkable for his brilliant control of colour, line and decoration. One shade could be used to express both sensuality and chastity, another to express pride and despair. "There are some reds which are triumphal", he said, "and there are reds which assassinate". The changing mood of a scene could be reflected by introducing colours gradually or by suddenly introducing a violently opposing colour, say, in a flash of brilliant skirt lining.

In Daphnis and Chloe, for example, the shepherds and shepherdesses wore calm yellows, browns, greens and whites, decorated with geometric shapes, soft waves, and antique motifs, such as stylised rams' heads. Into this calm scene came the more violent purples, dark blues and jarring ochres of the invading brigands – with heavier fabrics and more unstable patterns, such as checkerboards and zigzags.

In 1910 Bakst settled in Paris where he found his preferred costume maker, Mme Muelle, with whom he worked on his productions for Diaghilev and Ida Rubinstein. In the following years he fell in and out of favour with Diaghilev, and his last major work was for the 1921 London production of Pyotir Ilyich Tchaikovsky's The Sleeping Princess. He died in 1924 but his influence was far-reaching, even beyond the world of ballet. His extraordinary designs spilled over into both fashion and interior design, introducing looser-fitting clothing styles and sweeping away drab colours. 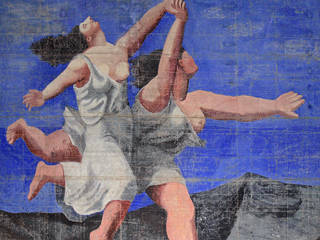 Diaghilev and the Ballet Russes