Portrait miniatures first appeared in the 1520s at the courts of Henry VIII in England, and Francis I in France. These small portraits were painted in watercolour on vellum, and protected in lockets or small boxes, making it easy for them to be carried or even worn. The success of the portrait miniature demonstrated the commercial possibilities of offering small, portable portraits to the public, and from the mid-17th century artists working in other media began to offer alternatives to the watercolour miniature.

Four other small portrait types competed successfully with the portrait miniature: 'plumbagos' – usually drawn in graphite or sometimes in ink on vellum; enamels – painted on gold or copper; silhouettes, or 'profiles' as they were called in Britain; and lastly, portraits in watercolour on paper – a quicker and cheaper method than painting on ivory.

These meticulous black and white portraits are called 'plumbagos', meaning black lead, but are drawn in graphite or sometimes ink.

Plumbagos developed in around 1600 within the Netherlandish print trade. One of the first plumbago artists in England was David Loggan. Born in Germany of Scottish descent, Loggan had trained as an engraver in Amsterdam. Loggan's free, soft use of graphite was mimicked in print by the new mezzotint technique, which he also pioneered in England.

Originally, plumbagos were made to be copied into print. But when drawn on vellum, which was more durable than paper, they were marketed independently. They were fashionable in England from King Charles II's return from exile in 1660 until the early 18th century. As the taste for these monochrome portraits was established, artists who were not print-makers also began to produce them. We know very little about Thomas Forster, for example, but he was clearly a talented plumbago artist and his portraits date from between 1690 and 1713.

Explore more plumbagos in our collections.

Enamels are painted on metal and fired in a kiln. Unlike miniatures they don't fade. The first enamellers in Britain were goldsmiths from abroad. Jean Petitot introduced the art at King Charles I's court but returned to France around 1649. Charles Boit, a Swede, reintroduced enamel portraits in the 1690s.

Enamels became really fashionable in Britain from the 1720s with the work of C. F. Zincke, a German artist. Some British miniaturists also offered clients enamels, but by the 1760s the fashion was passing. Jeremiah Meyer, who came from Germany in 1749 and trained with Zincke, became famous first as an enameller, and then as a miniature painter, having learnt the rival art of painting in watercolour on ivory.

Find out more about portrait miniatures painted in enamel.

The cutting of silhouettes, or 'profiles' as they were called in Britain, was a popular pastime in the 18th century. From the 1770s professional artists began to produce profiles as a cheap, quick form of small portraiture. Sittings took no more than five minutes and endless exact copies could easily be made from the original. Isabella Beetham was one of the first professional silhouette cutters to become fashionable.

But clients wanted novelty and artists needed to stand out from competitors. This soon led to elaborate variations on the simple cut profile. By the 1790s, many profiles were painted – on paper, ivory, plaster or even glass. Inevitably prices increased as the materials became more expensive.

Explore more silhouettes in our collections.

In the 1780s Richard Cosway, one of the leading miniature painters of the day, developed an intriguing and sophisticated new form of portraiture to offer his clients. These portraits joined the graphic with the fine detail of miniature painting. The figures were sketched vigorously with graphite, while the faces were carefully delineated with watercolour using the miniaturist's technique. The portrait of Sir James Hamlyn and his wife is not an unfinished study, as it may appear at first sight, but an example of this innovative style of portraiture.

Another fashionable miniaturist, John Smart, also offered clients watercolour portraits on paper which were larger than his miniatures. The portrait of Miss Harriet and Miss Elizabeth Binney measures 24.5cm across. Working on paper was less labour-intensive than painting on ivory, allowing Smart to produce larger 'miniatures' more cheaply – though unfortunately paper has the disadvantage that it discolours.

It has long been thought that Smart also painted small oval portraits on paper in which he lightly sketched the body leaving it 'unfinished', while the face was carefully delineated in colour – such as the portrait of Mr Tomkinson from around 1785. But recent research by V&A conservators suggests that many of these small ovals were preparatory studies for portraits on ivory and were originally rectangular. These were probably left in Smart's studio after his death and later sold, cut down, and framed like oval miniatures. 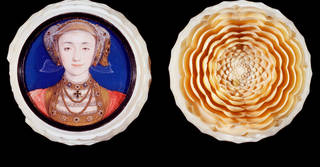 Visit the shop
Background image: Silhouette of an unknown man, painted on ivory and set in a bracelet of woven hair, John Field, about 1810. Museum no. P.169-1922. © Victoria and Albert Museum, London