Music underwent an extraordinary transformation from the mid-15th to the early 17th century, when new types of musical instruments developed and existing instruments were produced in ever greater numbers. The first printed music book appeared in Italy in 1501, and by the 1540s music was being published on an unprecedented scale, much of it directed at an amateur audience.

New music appropriate for domestic performance emerged at this time, ranging from the madrigal – a secular, vocal music composition, usually featuring three to six voices – to instrumental music for the lute and keyboard. Few non-courtly households would have owned a musical instrument in 1500 but by the end of the century they were owned by a surprisingly broad range of social levels: from members of the Venetian and Florentine nobility to barbers, wool merchants and cheese-sellers.

Although Italian instrument makers were constructing harpsichords by the mid-15th century, it was not until the 16th century that production reached commercial levels. Venice became one of the most important centres for harpsichord building in Europe, with craftsmen such as Giovanni Baffo enjoying a widespread reputation.

Lute-making also increased dramatically in Italy during the 16th century, with manufacture dominated by a small number of German families, including the Tieffenbruckers and the Malers. The lute, which derived from the Arabic instrument, the Oud, came to Europe in the 13th century via Islamic Spain. Lutes were relatively cheap to make and was the most popular instrument in the Renaissance, though they could also be highly ornamental and made of precious materials, such as ebony or ivory, for rich households and patrons. The backs of lutes were often the focus of decoration, visible only when they weren't being used, hung against a wall.

The cases of keyboard instruments were also elaborately painted. Cases could be unfolded in a series of stages to reveal layers of decoration. Above the keyboard, mottoes were often added, such as: I make the eyes and the heart happy at the same time or There is dancing when I sing. The Italian Renaissance humanist and writer Fra Sabba da Castiglione recommended furnishing the house with musical instruments "because such instruments as these greatly delight the ears … and they also greatly please the eye".

A vital feature of instruments in this period was their portability – the ability to easily move an instrument from one part of a house to another, or even from inside to outside the house, depending on the occasion. Gradually though, an increase in the popularity of owning multiple instruments and a general growth in the size of harpsichords led those at the highest social levels to create a music room – a dedicated space to store, rehearse and perform. An inventory of the possessions of the Florinetine Niccolo Gaddi at his death in 1591 lists a 'stanza de' suoni' on the ground floor of his house in Florence, containing 38 instruments.

From 1400 to the 1540s, most notated music in circulation in Italy was written by Franco-Flemish composers. The earliest madrigals, a new 'serious' form of vocal music, were written by northern Europeans such as Philippe Verdelot and Jacques Arcadelt in the 1520s and 1530s. Arcadelt's first book of madrigals, first published in 1538, became one of the most popular and reprinted books of music of the period.

The madrigal and other polyphonic forms of Renaissance music, such as the frottola and motet, could be sung at home. Music for four vocal parts was common until the mid-16th century, when pieces for five, six or more voices became popular. The music came in a set of partbooks, each devoted to a separate voice, and although they were written as vocal pieces, individual voice parts could also be played on instruments. By the mid-16th century, numerous volumes of basic music theory were available to teach novice musicians how to play and tune an instrument, and read all forms of musical notation.

It was recommended that musical education for boys should start at the age of seven. Whilst the physical benefits of playing music at any age were stressed, it was for 'lustful' youths that music was especially promoted: "I find nothing calms me and cheers up the perturbed harmony of the soul better … it softens the ardour of anger, and reforms degenerate customs". An equally strong and contradictory association was how music was thought to inflame the passions and carry powerful connotations of excessive luxury.

Music made an important contribution to the social life of many noblemen. Gatherings at which music was performed by a combination of professional and elite amateur musicians was common and could also include discussions of theoretical aspects of music. A reputation of musical ability could result in a constant supply of invitations to these events. At other lower levels of society people also met in each others houses to play and discuss music.

The musical education of daughters was seen as troublesome as musical ability was seen as part of an individual's seductive charms – all the more so because music teachers, in both fiction and documentary sources, had a dangerous habit of turning into seducers. Unsurprisingly then, there are fewer records of music lessons for girls. In his Libro della bella donna (1554), Federico Luigini advises young women be permitted to learn the lute only after first presenting several pages of justification listing classical precedents. As with other kinds of learning, it was feared that too much musical knowledge would interfere with a daughter's ability to run the house.

The music for O Rosa bella was written around 1400 by Johannes Ciconia, a Franco-Flemish composer, who worked mainly in Italy. In this recording the piece is performed with two male voices accompanied by a lute.

Jesu Corona Virginum was sung by an order of nuns from Florence, Italy, known as the Poor Clares. Although the Poor Clares took a vow of silence, their prayers were often sung during Mass and many nuns were also accomplished musicians.

This hymn praises a virgin, revelling in her spiritual marriage to Jesus and praying for her continued guidance. The hymn is dedicated to virgin martyrs, and is still sung in the Catholic Church.

D'où vient cela, belle is a sad lament of a jilted lover written by Claudin de Sermisy, one of the greatest masters of the Renaissance chanson (a lyrical song with French words). Sermisy composed for several French monarchs in the early 16th century, including François I and Henri II. His chansons were performed on a variety of instruments, but in this recording, four singers are accompanied only by a lute, a typical set-up of the time. Music like this, involving only a few performers, was probably heard in the private quarters of the palace, an intimate and exclusive experience.

Fine Knacks for Ladies is a madrigal – a poetic song. In it the singer presents himself as a humble pedlar travelling from town to town, selling combs, ribbons, knives, and other small objects. This pedlar sings in elegant language that reflects his status as an educated member of court circles. Through his words he argues eloquently that although his wares might seem superficially precious, they're worthless compared to the honesty and loyalty of his heart.

Se mai per maraviglia (If ever in wonder)

Se mai per maraviglia is one of the most famous and moving compositions written by Franciscus Bossinensis, or Francis of Bosnia. The song focuses on the intense emotions surrounding the death of Jesus and focuses upon the body of Christ hanging on the cross.

Latin was the language used for music written for the church but songs such as this were sung in the Italian vernacular and would have been understood by all. Composers took great care to insure the proper accentuation of the text, as the words had to be heard above the commotion of an outdoor festival. In this recording, three voices sing to the accompaniment of a lute.

These recordings was made by the Royal College of Music especially for the Medieval & Renaissance Galleries thanks to an award from the Arts and Humanities Research Council. 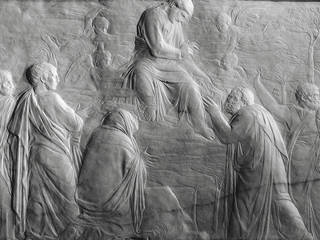 Visit the shop
Background image: (Detail) The Virgin and Child with Saint Anne, picture-motet, engraved by Jan Sadeler I, after a painting by Marten de Vos, 1584, Antwerp, Belgium. Museum no. E.5413-1919. © Victoria and Albert Museum, London