The V&A has in its collection a unique album of 223 exquisite watercolour textile designs by William Kilburn (1745 – 1818), regarded as one of the 18th century's most eminent calico-printers.

William Kilburn was born in Dublin in 1745, the son of an architect. He was apprenticed to Jonathan Sisson, the owner of a linen and cotton printing factory, at Lucan near Dublin. Most of his spare time was spent devoted to drawing and engraving, and devising patterns for chintzes (plainwoven, printed or solid-colour, cotton fabric), and copying the designs of others for his employer. When his apprenticeship ended, he moved to Bermondsey in South London, where he made a living selling his designs to calico printers. It was here that he became acquainted with the botanist William Curtis, who was impressed by his draughtsmanship and employed him to produce some of the plates for his book Flora Londinensis (published 1777 – 78).

William soon left for a more lucrative career in the textile industry where he accepted a position as manager of a calico-printing factory at Wallington in Surrey. After seven years he was wealthy enough to purchase the factory outright.

Much of Kilburn's success and repute was undoubtedly due to the quality and originality of his designs. Most contemporary designs appeared crude in comparison to his fine detail and rich yet subtle colour. Charles O'Brien in his book The British Manufacturers Companion and Calico-Printers Assistant (1792) described Kilburn's patterns as "perhaps the nearest approaches to nature in drawing".

All Kilburn's designs use floral motifs, accessorised with leaves, shells, ribbons or architectural elements. Kilburn demonstrates great skill in pattern-making, disguising the repeat in both complex and simple designs. The flowers and plants are mainly executed in a naturalistic fashion, though identifiable species are mixed with the exotic. Kilburn's most original and delicate designs are those which use a seaweed motif. The fine tracery of the seaweed is varied with coral, mosses, or skeleton leaves. His pieces of muslin chintzes sold for a guinea per yard, and he had the honour of presenting one of them, the sea-weed pattern, to Queen Charlotte (1744 – 1818).

These beautiful and expensive fabrics were much copied, with cheaper imitations printed and marketed within just ten days of Kilburn's originals appearing on the market. In 1787, Kilburn led a group of manufacturers to petition Parliament for loss of earnings from these copies. Kilburn won and a bill was passed in May 1787 – An Act for the Encouragement of the Arts of designing and printing Linens, Cottons, Callicoes and Muslins, by investing the Properties thereof in the Designers, Printers and Proprietors for a Limited Time. ‘Limited Time’ originally meant for two months only, but was later extended to three.

Despite this, there was a decline in the London trade as competition from Lancashire increased. The London companies failed and Kilburn himself was declared bankrupt in April 1802. Sadly, no existing textiles can be attributed to him with any certainty.

Explore a selection of Kilburn's textile designs in our slideshow below: 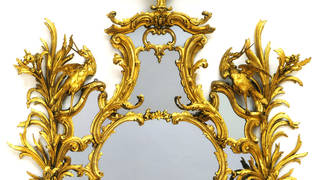