Surrealism is one of the most influential art movements of the 20th century. It was inspired by both the political theories of Karl Marx and the study of the unconscious mind (psychoanalysis), developed by Sigmund Freud in the 1890s. The term Surrealism was first coined in 1917 by the art critic and poet Guillaume Apollinaire, and in 1924 it was used by the writer and theorist André Breton to describe a politically radical movement. This movement aimed to change perceptions of the world by exploring dreams, the unconscious mind and the irrational. The Surrealists often used 'automatic' techniques – spontaneously creating art without conscious thought – to surface images from the unconscious.

In the 1930s, despite the opposition of some Surrealists, the movement began to cross-over into the commercial, material world. Escaping the bounds of a radical avant-garde art movement, the leading Surrealist artists often worked as commercial designers themselves, particularly in the fields of advertising, graphics, theatre and film.

Surrealism and the ballet

The ballet was one of the first spheres to reveal the wider influence of Surrealism. Presenting exciting opportunities to realise an illusory world through stage-set and costume design, it attracted leading figures from the Surrealist movement. In 1926, artists Max Ernst and Jean Miró were commissioned by Serge Diaghilev, the artistic director of the Ballets Russes, to design sets for Romeo and Juliet. Diaghilev wanted a strong visual concept, and the backdrops certainly added a surreal touch – the final scene saw the lovers escape by aeroplane after their deaths. The ballet's Paris premiere on 18 May 1926 provoked a Surrealist scandal however, as fellow Surrealists André Breton and Louis Aragon stormed the production, protesting against the merging of art and commerce. But Miró continued to be drawn to the enchanting world of ballet – his costume design for the 'Spinning Top' character in Jeux d'enfants (1932) for example, used encircling bands of colour which intensified the dancer's spiralling motion.

Surrealism and the object
In the 1920s Surrealist technique had focused on the use of writing, drawing, collage and painting as techniques to reveal the subconscious mind. But the early 1930s saw the emergence of a new type of practice – the creation of the Surrealist object. The shift away from text and image was driven by the need to engage directly with the material world, the world of objects and commerce. The Surrealist object could, it was felt, represent the complexities and contradictions of modern life. Salvador Dalí summed up his desire to make objects:

I try to create fantastic things, magical things, things like in a dream. The world needs more fantasy. Our civilisation is too mechanical. We can make the fantastic real, and then it is more real than that which actually exists.

Dalí's Lobster Telephone (1936), is perhaps the most famous example of a Surrealist object. Following Dalí's lead, several artists began to create Surrealist objects – new objects constructed out of pre-existing and often outdated commodities. These constructions forced new meanings through bizarre juxtapositions that alluded to subjective dreams or desires. Eileen Agar's Ceremonial Hat for Eating Bouillabaisse was made during a trip to the South of France in 1936, from objects she found on the seashore. She later described the piece:

It consisted of a cork basket picked up in St Tropez and painted blue, which I covered with fishnet, a lobster's tail, starfish and other marine objects. It was a sort of Acrimboldo headgear for the fashion-conscious, and received a lot of rather startled publicity.

The Surrealist object was partly intended as critique of consumer culture. However in making the 'fantastic real', by using commodities and directly engaging with the material world, they also highlighted the commercial possibilities of Surrealism, and its application in the decorative arts.

Surrealism and the interior

In Sigmund Freud's theory of dream analysis, the home carried a range of disturbing and sexualised meanings that preoccupied the Surrealists. By combining the antique, the new and the bizarre, they created their own interior environment that offered a stark contrast to the prevailing views in modern interior design.

The most well-known domestic Surrealist interior in Britain was Monkton House, the country home of Edward James, a collector, poet and important patron of Dalí. In the mid-1930s James redesigned Monkton House as "a complete Surrealist house", combining his taste for Victorian, Edwardian and Surrealist design. James worked with Dalí to create a number of outlandish furniture designs for the interior scheme, which are now in the V&A collection.

Read more about the Surrealist interior at Monkton House.

Hans Schleger was one of the most versatile graphic designers of the century. Schooled in Germany during the 1920s, he worked for advertising companies in Berlin and New York before settling in London in 1932. Working under the pseudonym Zéro, he employed a range of approaches, from Bauhaus-inspired Modernism to Art Deco and Surrealist visual strategies. His poster These Men Use Shell is informed by Surrealist imagery and recalls Rene Magritte's use of floating clouds across an open eye in Le Faux Miroir (1935). The juxtaposition and contrasting scale of the disembodied head, pencil and distant figures further evoke the world of imagination. The poster was part of an extensive publicity campaign in the 1930s, which transformed oil company Shell's visual appearance by commissioning young artists to design posters.

Surrealism and the body

The representation of the body, and particularly the female body, provided a common thread through the public displays, exhibitions and commercial activities of the Surrealists. For them, the body became the subject of intense scrutiny – dismembered, fragmented, desecrated, and eroticised. It allowed for an exploration of sexuality as an aspect of modernity, and was a driving force in the commercialisation of Surrealism.

Fashion offered the Surrealists further opportunities to explore sexual symbolism and particularly, the focus of sexual desire on a particular part of the body or object (fetishisation). According to the influential Surrealist gallery owner Julien Levi, Elsa Schiaparelli was the only fashion designer to interpret Surrealism successfully. She collaborated with the leading Surrealists, including Jean Cocteau and Salvador Dalí, resulting in her most overtly Surrealist designs. The Shoe hat from 1938, with its pink velvet high-heel, is a famous example of Surrealist displacement, where the object is removed from its expected context. It was closely followed by the Skeleton and Tear dresses, also in collaboration with Dalí, combining humour with a morbid edge. Though Schiaparelli's designs pushed the boundaries of fashion, they were also smart and often very wearable.

The Surrealists borrowed from 19th-century natural science, Art Nouveau and new technologies such as microphotography and film to create a new symbolism, rich in natural forms and motifs. These were quickly adapted for use in design, creating a visual language of organic forms, known as biomorphism, or 'free-form'. The undulating curves of Carlo Mollino's Arabesque table, for example, were inspired by the flowing lines and biomorphic shapes of Surrealist art, particularly the work of the abstract sculptor and painter Jan Arp, while the shape of the table-top was based on a sketch of a reclining girl by Surrealist artist Leonor Fini.

This content was originally produced for the exhibition Surreal Things (2007), with extracts from the exhibition catalogue, edited by Ghislaine Wood. 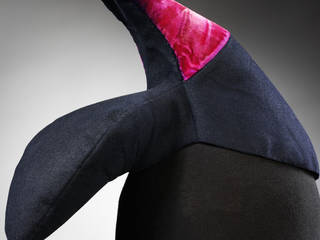