The Baroque is a highly ornate and elaborate style of architecture, art and design that flourished in Europe in the 17th and first half of the 18th century. Originating in Italy, its influence quickly spread across Europe and it became the first visual style to have a significant worldwide impact.

A defining characteristic of the Baroque style was the way in which the visual arts of painting, sculpture and architecture were brought together, into a complete whole, to convey a single message or meaning.

Baroque art and design addressed the viewer's senses directly, appealing to the emotions as well as the intellect. It reflected the hierarchical and patriarchal society of the time, developing through and being used by those in power – the church, absolute rulers and the aristocracy – to persuade as well as impress, to be both rich and meaningful. Compared to the control and carefully balanced proportions associated with the Renaissance, Baroque is known for its movement and drama.

Baroque's influence extended from Italy and France to the rest of Europe, and then travelled via European colonial initiatives, trade and missionary activity to Africa, Asia, and South and Central America. Its global spread saw Chinese carvers working in Indonesia, French silversmiths in Sweden and Italian hardstone specialists in France. Sculpture was sent from the Philippines to Mexico and Spain, whilst London-made chairs went all over Europe and across the Atlantic, and French royal workshops turned out luxury products that were both desired and imitated by fashionable society across Europe. However, as a style, Baroque also changed as it crossed the world, being adapted to new needs and local tastes, materials and contexts.

In China, the European pavilions were the grandest expressions of the Qing rulers' interest in the arts of Europe. These European-style palaces were part of the Yuanming Yuan or Old Summer Palace in Beijing, the Emperor Qianlong's summer residence. Designed by Jesuit priests, the pavilions – most of which were completed between 1756 and 1766 – were based on Baroque models and included grand fountains and statues. In the 1780s, a set of copperplate engravings depicting the European pavilions was commissioned. This album, a copy of which is in our collection, is an important visual record of the pavilions as they were destroyed by English and French troops in 1860.

A sense of drama

An important feature of Baroque art and design is its use of human figures. Represented as allegorical, sacred or mythological, these figures helped turn the work into a drama to convey particular messages and to engage the emotions of the viewer. They have a sense of realistic immediacy, as if they had been stopped in mid-action. Facial expression, pose, gesture and drapery were all used to add dramatic details.

A bust of King Charles II of England in our collection perfectly captures the drama of Baroque portraiture. Portrayed in an animated fashion, his head is turned to one side and an elaborate wig cascades down over his lace cravat and billowing drapery. Such grand Baroque images of monarchs and powerful aristocrats were more common in 17th-century France than in England but Charles had spent much of his youth in mainland Europe and favoured European artists. The bust is in the tradition of flamboyant and imposing portraits of monarchs, and would have unambiguously asserted the King's status.

The performance of architecture

Baroque buildings were also dynamic and dramatic, both using and breaking the rules of classical architecture. Inside, the architecture echoed theatrical techniques – painted ceilings made rooms appear as if they were open to the sky and hidden windows were used to illuminate domes and altars.

Again, the design was used to convey specific meanings and emotions. Papal Rome became a key site for religious Baroque architecture. An example of the Baroque's theatricality can be found in Gianlorenzo Bernini's (1598 – 1680) design for St Peter's Square. Its grand, imposing curved colonnades, centred on an obelisk, are used to both overwhelm the visitor and to bring them into the church's embrace.

Baroque architecture also shaped the way the public spaces of the city appeared. Public celebrations played an important role in the political life of a nation. Typically, such events took place out of doors and were elaborately designed spectacles. Urban squares such as Piazza Navona in Rome and Place Louis-le-Grand (now Place Vendôme) in Paris were the backdrop for firework displays, lavish theatrical performances and processions in elaborate and expensive costumes.

Imposing architecture was also used to reinforce the power of absolute rulers, such as with the Palace of Versailles, in France – the most imitated building of the 17th century. In 1717, the Swedish architect Nicodemus Tessin the Younger compiled a "treatise on the decoration of interiors, for all kinds of royal residences, and others of distinction in both town and country", based on his own travel notes. One of the most expensive, recent innovations he recorded was the presence of mirrors so large they covered entire walls. He also noted the use of glass over the chimneypiece in the King's Chamber at Versailles.

A fascination with physical materials was central to the Baroque style. Virtuoso art objects made of rare and precious materials had long been valued and kept in special rooms or cabinets, alongside natural history specimens, scientific instruments, books, documents and works of art. However, during the Baroque period, the birth of modern science and the opening up of the world beyond Europe brought an increasingly serious interest in the nature and meaning of these exotic materials. Rarities such as porcelain and lacquer from East Asia became fashionable and were imitated in Europe. New techniques, such as marquetry (the laying of veneers of differently coloured woods onto the surface of furniture), developed by French and Dutch cabinet-makers and learned from them elsewhere, were also developed.

The value attached to such materials can be seen in a porcelain cup from our collection. Made between 1630 and 1650 in China originally as a writing-brush jar, it later had extravagant silver-gilt mounts added in London, which transformed the brush jar into a luxurious, decorative two-handled cup and cover.

Representations of the natural world, as well as motifs derived from human and animal forms, were popular decorative features. The most widespread form of Baroque floral decoration was a running scroll, often combined with acanthus – a stylised version of a real plant of the same name. A late 17th-century tankard in our collection features lavish floral decoration. The leaves of the flowers have been turned into scrolling foliage, while the flowers themselves have striped petals, likely to represent a tulip, another key motif of Baroque art.

The auricular style, which featured soft, fleshy abstract shapes, also emerged in the early 17th century, creating an effect that was ambiguous, suggestive and bizarre. In fact, the term 'Baroque' was a later invention – 'bizarre' was one of the words used at the time for the style we associate as Baroque today.

The theatre was a setting for magnificent productions of drama, ballet and opera – a new art form at that time. With their ornate costumes, complex stage sets and ingenious machinery, these performances created wonder and awe. Theatre was popular both with the public and at court. Written by Jean-Baptiste Lully for the French court of Louis XIV (reigned 1643 – 1715), the opera Atys was such a favourite with the King that it became known as "The King's Opera". Our collection includes a pen and ink design for the costume of the character Hercules in Atys. He is shown in a ballet pose, wearing a Roman-style costume, and identified by his club and lion skin.

Theatre also played a role in the power struggles between European courts. Rulers vied to outdo each other in the magnificence of their productions. In France, theatre and opera also became a key element of Louis XIV's cultural policy, which was used to control the nobility and express his power and magnificence. In the early 18th century, the theatre building itself acquired new importance as proof of courtly, civic or technological power. The resulting new buildings across Europe established the theatre in the form we know today.

However, by the mid-18th century, the Baroque style seemed increasingly out of step with the mood of the time, which placed increasing emphasis on reason and scientific enquiry. Baroque was criticised as an "immoral" style and art and design turned away from its use of emotion, drama and illusion, returning to a simpler style inspired by classical antiquity. It was only in the late 19th century that the style began to be critically reappraised once more. 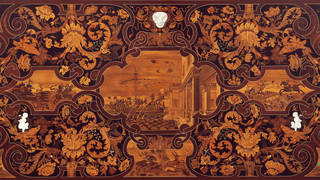