From the mid-20th century glasses became a fashion accessory in their own right, a trend actively pursued by the British optical firm Oliver Goldsmith, who created deliberately stylish and occasionally outlandish frames for the likes of Princess Grace of Monaco and Diana Princess of Wales.

We hold over 70 pairs of glasses and sunglasses designed and handmade by Oliver Goldsmith over a 60 year period. This collection charts dramatic changes in glasses design, from the handcrafted tortoiseshell frames of the 1920s and 1930s, through the early use of plastics in the 1950s to the sophisticated manufacturing techniques and style statements of the 1970s and 1980s.

The firm was founded in 1926 by Philip Oliver Goldsmith (1890 – 1947) who started out as a travelling salesman for the well-known optical firm Raphaels in the 1920s. Catering to the higher end of the market, he hired a group of craftspeople to make real tortoiseshell frames by hand in his own London workshop, based at 60 Poland Street. At the time, tortoise species had not yet been declared endangered, and their shells were a very popular material for glasses.

The firm crafted tortoiseshell spectacle frames throughout the 1930s, supplying members of the armed forces during the Second World War. Philip's son Charles Goldsmith (1914 – 91) entered the family firm in 1930 and became chairman after his father's death in 1947, assuming the name Oliver Goldsmith. After the war, the company expanded from utility-style tortoiseshell frames to new experimental styles and materials, aiming to attract greater publicity and encourage people to spend more on glasses.

Oliver's sons, Andrew Oliver and Raymond, joined the family business in the 1950s and the firm produced a string of deliberately wacky designs, incorporating unusual materials like bamboo, and outlandish motifs from butterflies to union jacks to tennis rackets (at the request of Teddy Tinling, an English tennis player and fashion designer who designed clothes for a string of Wimbledon tennis champions).

Sunglasses were also fast becoming a fashion statement. British film-star Diana Dors wore Oliver Goldsmith's eye-popping white 'Martian' frames at the Cannes film festival, while several pairs were worn by Audrey Hepburn, including 'The Manhattan' for her starring role in Breakfast at Tiffany's (1961). Such innovative designs and their celebrity appeal helped to transform glasses from a medical necessity to a chic, fun fashion item.

In the 1960s, all Oliver Goldsmith frames were still crafted by hand in the Poland St workshop. The process started withe a design, in the form of a hand-drawn sketch. The frame-makers would cut a slab of plastic into the desired shape, file down the edges, attach the sides, sand down the finished design and lastly, fit the lenses.

As the optical market grew, the company continued to cultivate press coverage and promote its designs via trade shows and on TV in order to target new customers. They continued to experiment with different materials, such as aluminium for the design 'Car Headlights', in collaboration with American aluminium company Hilsinger. They also responded to emerging fashion trends with new glasses designs – a pair called 'Sloanes to a Punk Party' were adorned with safety pins, studs and paper clips, apparently sourced from the desk-drawers of the company's offices.

In 1972 the firm moved from Poland Street to Potters Bar in Hertfordshire. By now the company was making new styles regularly. Depending on the complexity of the design, the process of making a frame by hand would take from six hours up to several days. To keep up with demand, they moved from making fully handmade, to semi-handmade frames – the plastic was cut by machine before being assembled and finished by hand. Their prototypes were still designed in-house.

In the 1980s the company faced increasing competition for the British market from firms such as Anglo American, Michael Selcott Designs, Correna and Linda Farrow. These companies sold to the higher end of the optical trade and sold mainly through department stores and opticians, while less expensive frames were sold in pharmacies. Fashion designers themselves also began to license their names for frames: André Courreges, Christian Dior and Oleg Cassini were among the first to create eyewear licences.

Towards the end of the 20th century, Oliver Goldsmith continued to actively seek publicity and to advertise widely, within a fast-paced fashion-oriented market. Recently the company has enjoyed renewed success, under the leadership of Claire Goldsmith, fourth generation of the Oliver Goldsmith company. The brand relaunched their sunglasses line in 2007 and today offers re-issues of their classic 'vintage' designs from the 1950s, 60s and 70s, which continue to be sold world-wide.

From 1930s tortoiseshell frames, to bold 1980s fashions, explore a chronological selection of Oliver Goldsmith glasses in our slideshow below, or see the full collection in Search the Collections. 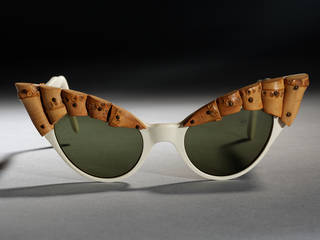