The Great Exhibition of 1851, held in a purpose-built Crystal Palace in Hyde Park, London, was the first international exhibition of manufactured products. Amongst its thousands of exhibits were many wallpapers, from more than 50 firms from Europe, the United States and Britain. These papers became a focus for criticism by certain designers and educators who were increasingly depressed by the decline of design standards in the industry.

Richard Redgrave, who was at the time Inspector-General for Art (later Principal of the Government's Schools of Design), wrote an official report on the wallpapers shown at the Exhibition, in which he criticised the fact that quality was based on the number of colours used rather than any other aesthetic considerations.

The Great Exhibition was itself commemorated in a wallpaper which embodied so many of the faults identified by the critics that it was selected for the display 'False Principles in Design’, at Marlborough House in 1852 – a display that included a selection of objects that were considered to exemplify everything that was wrong with design in England.

The mechanisation of the industry was seen by many as the main cause of the decline in design standards. Ironically, it was perfection and uniformity which the machine could achieve, that was considered to be symptomatic of poor taste. Printing from engraved rollers allowed fine detail and shading that was impossible to achieve with hand-block printing. This capacity was exploited by designers, who submitted more and more detailed and illusionistic designs. Design reformers considered flat forms and blocks of single colours as more 'honest' and 'appropriate' as decorations for walls.

Another reason suggested for the low standards of design in British papers was the desire by manufacturers to keep production costs to a minimum. It was noted that the French spent more on their materials, and on the process of manufacture itself, and valued their skilled workmen more highly.

Design reformers argued it was the responsibility of the trade to educate public taste, but this was resisted. Manufacturers, supported by mechanisation of the production processes, were able to diversify the product to increase demand. By the mid-19th century there were so many patterns to choose from, with the market dominated by revival styles and historical pastiches. Overly decorative elements were combined with naturalistic floral motifs to produce patterns which were dense with ornament and printed in strong colours, especially the newly-fashionable mauves and magentas.

Also popular, particularly amongst the less well-off, were the novelty wallpapers with pictorial designs that were produced in vast quantities from the 1840s. Their subjects were often commemorative – souvenirs of public occasions and historical events, sports and pastimes. Despite being condemned by critics, they were seen by some as acceptable decorations for poorer homes due to their educational value. These types of paper would also have been used in inns, as an entertaining and topical decoration.

The design reformers' fundamental objection to these pictorial papers was that decoration of a flat surface should itself be flat rather than giving an illusion of three-dimensional ornament, or worse a three-dimensional picture. A leading figure in the reform movement was the architect and designer A.W.N. Pugin (1812 – 52). He too criticised the false illusion of depth and the use of trompe l'oeil shadows (an art technique that uses realistic imagery to create an optical illusion), and argued instead for flat patterns composed of simple forms which would confirm the wall as a flat surface rather than disguising or contradicting it. He practised what he preached, designing wallpapers with flat, formalised geometric patterns such as fleurs-de-lis, quatrefoils (ornamental design of four lobes or leaves), heraldic motifs, and flower and foliage forms adapted from medieval art, architecture and textiles. Such papers, each designed specifically for its setting, were used throughout the New Palace of Westminster (Pugin had won the commission for the interior decoration in 1837) and in his domestic projects.

Pugin's principle of authenticity in design and his belief that only flat patterns should cover flat surfaces, became the fundamental principles of the design reform movement. In the 1850s these ideas were promoted through the Government's Schools of Design in South Kensington, and by several individuals connected with them: the painter Richard Redgrave, Principal of the School; Sir Henry Cole, a civil servant, and later the V&A's first Director; and Owen Jones, a leading designer and architect. All three were keen to raise standards of design in industry and to educate public taste away from the patterns which dominated the mid-19th-century wallpaper market.

Owen Jones (1809 – 74) admired Greek, Egyptian and Islamic (or Moorish) motifs, and adapted them into his own architectural schemes and designs for wallpaper, which went into production from the early 1850s. He published his research in The Grammar of Ornament (1856), an important source book for fellow designers. Though many of his patterns were geometric – reducing motifs from nature to ordered mathematical abstractions – his papers seem to have been more popular than those of Pugin for the ordinary domestic interior. A number of his designs were produced as machine prints, which helped to disseminate his style more widely.

A moral dimension to wallpaper design was also stressed by critics. Women were told that 'the decoration of houses ... contributes much to the education of the entire household in refinement, intellectual development, and moral sensibility'. Mothers were urged to consider the injurious influence which 'false' ornament would have on their impressionable children.

By the mid-19th century the home was conceived as a refuge, a place of honesty, authenticity and uncorrupted values, raised above the external worlds of business, commerce and politics. Cleanliness and order were central to the making of this happy home, and furnishings were considered as important objects in moulding the character of the home and instilling sound moral values. Decorative strategies involving illusion and deception, such as those that imitated marble or woodgrain, were condemned as dishonest materials to be avoided.

Design reform initiatives continued into the 20th century with the establishment of bodies such as the Art in Industry Movement (AIM), which like its 19th-century predecessors, was largely concerned with the education of taste amongst designers, manufacturers retailers and the general public.

Nevertheless it was the 'bad' designs which sold in vast quantities, and the artist-designed patterns were mostly produced as smaller, more expensive hand-print ranges. Gradually, however, the design establishment which had been so dismissive of wallpaper, became more accepting as designs which were more obviously contemporary began to appear. 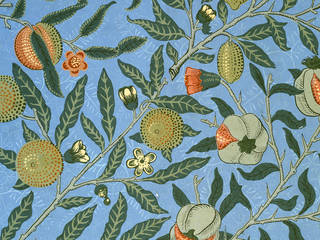