Walter Sickert (1860 – 1942), was a painter and printmaker who immersed himself in the world of the music halls in his desire to capture modern life. For Sickert the music halls were a serious subject for art – a spectacle of light, colour, movement and sound, with female performers who were a never-ending source of artistic inspiration.

Britain once had over 500 music halls, but only a handful of these buildings survive, including Wilton's Music Hall in London – the world's oldest surviving grand Victorian music hall. The story of the Bedford Music Hall in Camden, London, is typical. Struggling as audiences began to favour cinema and radio over variety theatre and music hall, the Bedford finally closed its doors in 1959. It lay derelict for a decade before being demolished.

The Bedford now only exists as a theatre of memories. Accounts by performers and audiences help to build up a picture of the theatre. Loved by the 'Queen of the Music Hall' Marie Lloyd for its democratic atmosphere, the Bedford was frequented by the writer Virginia Woolf and played host to a century of stars including Charlie Chaplin. In 1929, a young Peter Sellers lived above the theatre as his mother performed on the stage below. By the time he began his career the halls were empty, and he and his contemporaries found their home in film, television and radio.

The first Bedford Music Hall opened its doors in 1861. The original theatre – with its large gilt mirrors, gas lights and orange and blue colour scheme – was demolished in 1898 to make way for the new Bedford Music Hall. The new larger theatre had improved sight lines, new stage technology and electric lighting.

The Bedford was at the heart of Camden's community. At the turn of the century, Camden, with its canals and railway, was a thriving economy. It was home both to the affluent and to many skilled manual workers employed in new businesses. Piano making was a key industry for the area, with 300 companies involved in the trade in the Edwardian era. This established Camden as a hub for the music business.

Sickert and the Bedford

Throughout his career Sickert spent long periods in and around Camden. In 1907 he was renting four properties simultaneously in the area, including studios on Mornington Crescent and Brecknock Road. The studios were in close proximity to the Bedford, and provided different light and stimuli for his painting.

For Sickert, the vibrant and colourful music halls were a microcosm of modern life, a mirror of the great metropolis. He had a life-long passion for performance, having worked briefly as an actor, and often dressed up in costume, taking on different identities.

Sickert's relationship with the Bedford began in 1885. He later described it as "my old love". At the Bedford, Sickert could blend into the crowds, and the proximity of the audience to the stage allowed him to observe his favourite performers close-up. His paintings and sketches reveal different perspectives of the music hall, including the mirrors and the architecture, fleeting moments on the stage and glimpses of characters in the crowd. He captured many female music hall stars at the Bedford, including the child performer Little Dot Hetherington, and the singer and comedian Vesta Victoria. 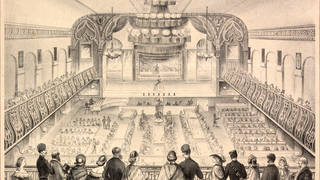