Tapestry is one of the oldest forms of woven textile. As a technique, tapestry has been used to create everything from tunics and purses to table covers and chair backs, as well as some of the world's largest and most beautiful pieces of textile art.

In Europe, the great period of tapestry weaving ran from the second half of the 14th century to the end of the 18th century. This period is best known for the production of wall-hangings woven in this technique, which we generally refer to as tapestries. Tapestries were owned by the elite and used to decorate both private and public spaces. Henry VIII is recorded as having 2,000 tapestries hanging in his various palaces.

Large tapestries added vibrant colour to a room. They kept out draughts and provided both entertainment and food for thought through their dramatic depiction of stories from the Bible, mythology and the classics, or their revealing portrayal of fashionable life. They were extremely costly to produce and so served to demonstrate their owner's wealth. Unlike today, tapestries were not simply static objects, but were often rolled up and moved between residences. In the 1540s, King Francis I of France even commissioned a set of tapestries which reproduced the wall decoration of his newly renovated Great Gallery at Fontainebleau Palace in woven form. This set could be rolled up and transported to his other residences.

Wool is the material that has been most widely used for tapestry weaving, traditionally used for both the warp and weft threads. As well as being readily available and easy to dye, its natural strength and flexibility lend themselves well to tapestry weaving. Silk threads are sometimes used in the weft, in addition to wool, to help create intricate details and add depth to the design. Metal threads can also be used to add detail although due to their high cost they are more commonly found in small examples of tapestry, such as bible covers and purses rather than in large hangings.

A tapestry is created by weaving coloured weft threads through plain warp threads. The warp threads are stretched on a loom and act as a grid for weavers to create a pattern with the coloured weft threads. The key feature of tapestry weaving is that most of the weft threads do not run all the way across the warp. Instead the weft runs back and forth across a specific segment of the warp to create a small block of colour. This is known as a discontinuous weft. Weavers build up blocks of colour to create a pattern or picture.

During weaving the weft threads are beaten down hiding the warp to create a weft-faced textile so the design is visible on the front and the back. In older tapestries, the original colours are often more intense on the back, which would have been protected from exposure to light.

Tapestries are woven on a loom. At its simplest, a loom is formed of two rollers, between which the warp threads are strung. The loom serves to keep the warp tensioned so the wefts may be passed back and forth easily to build up a design. In European tapestry weaving there are two main types of loom which can be used, a low-warp loom and a high-warp loom. On low-warp looms, the rollers are on the same level and the warp is stretched horizontally between them. On a high-warp loom the warp threads are stretched vertically between a top roller and a bottom roller.

Tapestry weaving is an extremely labour-intensive process. Weaving just one square metre of coarse tapestry could be a month's work for one person. High-quality tapestries are produced with finer warp and weft threads and take longer to make. On a large loom, several weavers can work sitting side by side to speed up production. Nevertheless, a set of large tapestries, created by multiple weavers, could easily take over a year.

Weavers traditionally work from a design known as a cartoon. This is painted on cloth or paper at full scale and either attached to the loom or hung behind it. Historically, on a low-warp loom, the cartoon was placed underneath the warps and the weaver had to move these aside to follow the design in detail. As tapestries were woven from the back, if the weaver copied the cartoon exactly, the finished tapestry, when viewed from the front, was the reverse of the cartoon. High-warp looms enabled weavers to produce a design the right way around. The cartoon was hung behind the weaver who used a mirror to view a reflection of the cartoon. By working from the reflection, the finished tapestry was the correct way around.

Once a tapestry was finished the cartoon could be re-used. A tapestry workshop that had a popular set of designs, which they could weave and sell several times, was assured of financial success. Many of the busiest companies employed professional artists to produce the full-size designs that the weavers reproduced.

The Raphael Cartoons are examples of 16th-century tapestry designs. Commissioned by Pope Leo X, they were designed by the artist Raphael on the theme of the Acts of the Apostles. Once the tapestries were woven the cartoons were sold on to other workshops. In 1623 they were bought by the future King Charles I for use at the tapestry workshop in Mortlake and later came to the V&A, on loan from HM Queen Elizabeth II.

Contemporary tapestry weavers continue to explore and re-define the process of tapestry, utilising new materials and forms. While technological advances mean that tapestries can now be woven mechanically, many contemporary weavers still use traditional hand-weaving methods. Fiona Rutherford's work 'Go-Shoaki Shimasu' (Let me introduce you) is an example of contemporary tapestry in which the weaver has played with form to create a unique kimono-shaped piece. 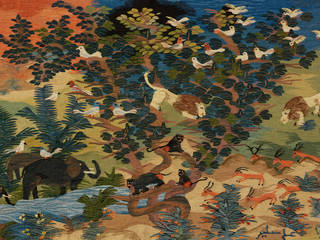