The Hindu festival of Holi falls in February and March, depending on the lunar calendar, heralding the arrival of Spring.  In 2014 Holi is celebrated on the 17th March.  The day is infused with a chaotic and joyous atmosphere during which participants throw brightly coloured powders and liquids at each other, and spray coloured water from syringes. 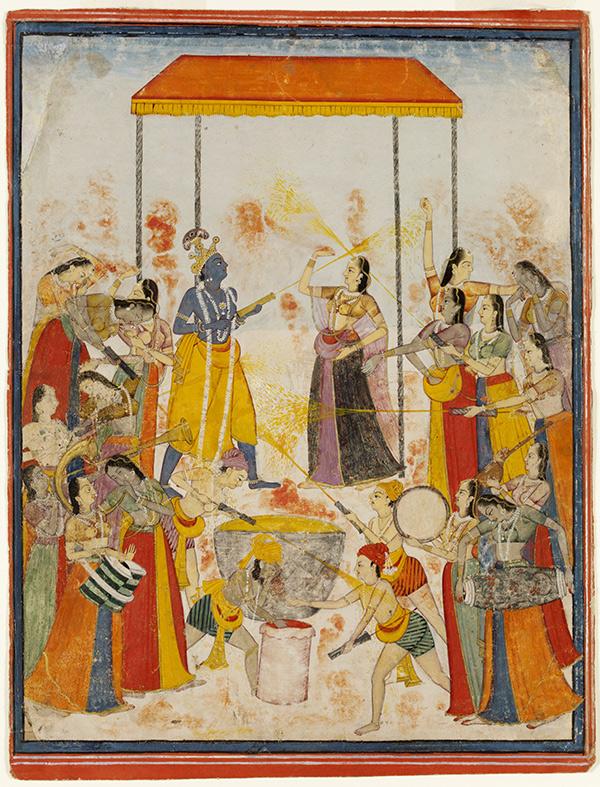 Amongst the display of works on paper in the The Nehru Gallery (Room 41) is an intriguing painting attributed to artists painting for the court at Nurpur, in the Himachal Pradesh, North India, around 1775. This enchanting image is filled with the same exuberance and gaiety that accompanies the festival of Holi today.

Central within the image are the figures of Krishna and Radha, whilst around them others jostle together in a frenzy of activity. Clouds of red and yellow powder rise above the throng, highlighted against a pale blue ground. The artist’s attention is drawn to detailing the variety of figures and their actions, rather than creating a sense of space. This flattened composition, and the bold use of red and yellow pigments further add to the chaotic atmosphere of the busy scene.

Krishna, the incarnation of the Hindu god Vishnu, has strong associations to the day of Holi. During the festival, the singing of traditional folk songs recalls fun and frolics the youthful Krishna had with his beloved Radha. Here they appear under a canopy, accompanied by their fellow cowherds and gopis, or cowherd maidens.

In the lower centre is a large basin filled with water dyed yellow by the tesu flower, or ‘flame of the forest’. The bamboo syringes, or pichkari, being used by the gopis and cowherds to spay over each other have been filled with this saffron coloured water. Others toss handfuls of gulal, or Holi powder and accompany the merriment with drums, tambourines and other musical instruments. 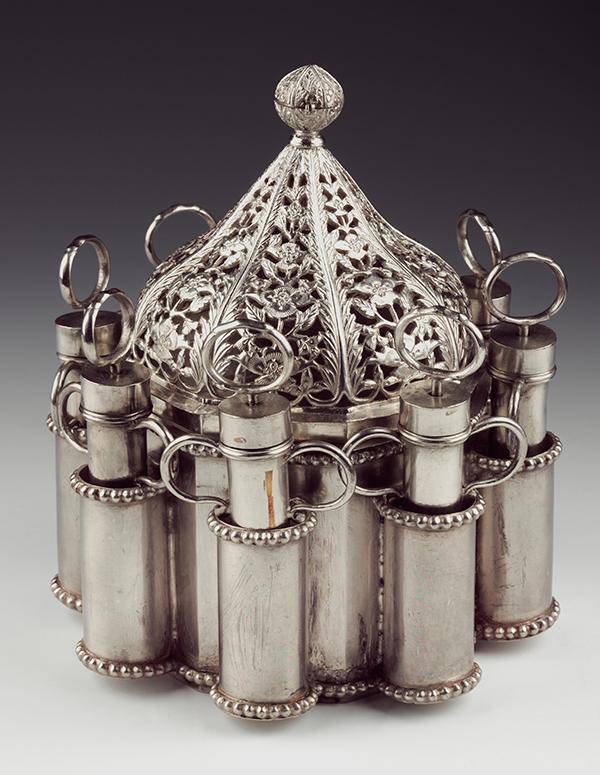 Metal syringes were also used, such as this courtly example from 19th century Dehli. Today, Holi powder is manufactured in a wide array of different colours, but traditionally it was yellow and red: the yellow most likely ground turmeric and the red made from dried and crushed petals of the same tesu flower used to colour the water.

Krishna was a favoured subject in paintings from the Rajput courts of the Punjab Hills, where the city of Nurpur is located. Paintings from this area, particularly from the 17th and 18th centuries are known as Pahari paintings, meaning ‘of the hills’. A number of these also depict the celebration of Holi. 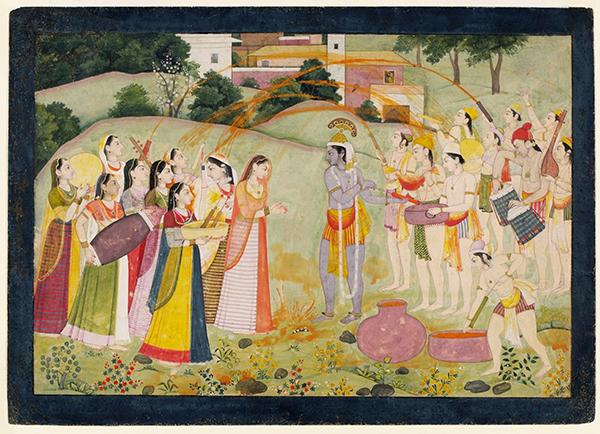 In this painting from the late 18th century court at Kangra, Krishna and Radha, together with their companions, celebrate Holi in a lush hilly landscape filled with delicate flowers and blossoming trees. In a second painting attributed to Kangra, 1788, Krishna is absent whilst Radha and her attendants are dressed in vibrant colours, showering each other with red and yellow powder. A verse inscribed on the reverse alludes to the love of Radha and Krishna. 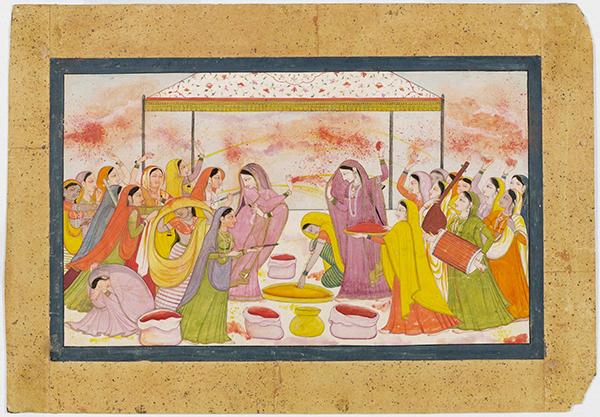