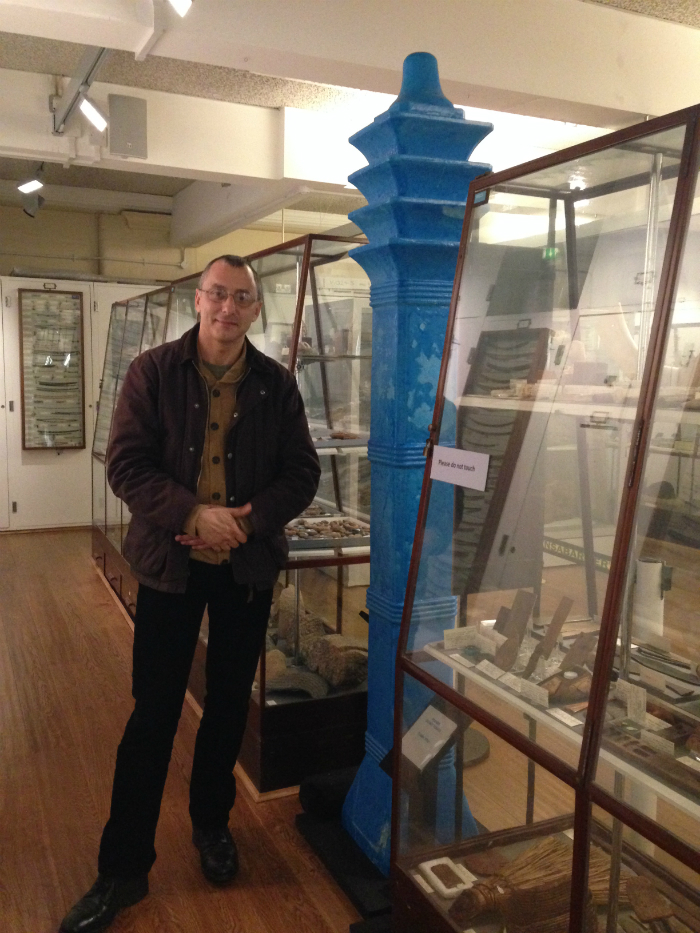 Syrian archaeologist and ceramic artist, Zahed Taj-Eddin, has recreated the ancient Egyptian technology of faience – an artificial ceramic body made using crushed quartz, and glazed by different methods using mineral-based glazing powders which bond with the body during the firing process. In particular, a copper compound creates the distinctive turquoise colour that we most associate with Egyptian faience today. 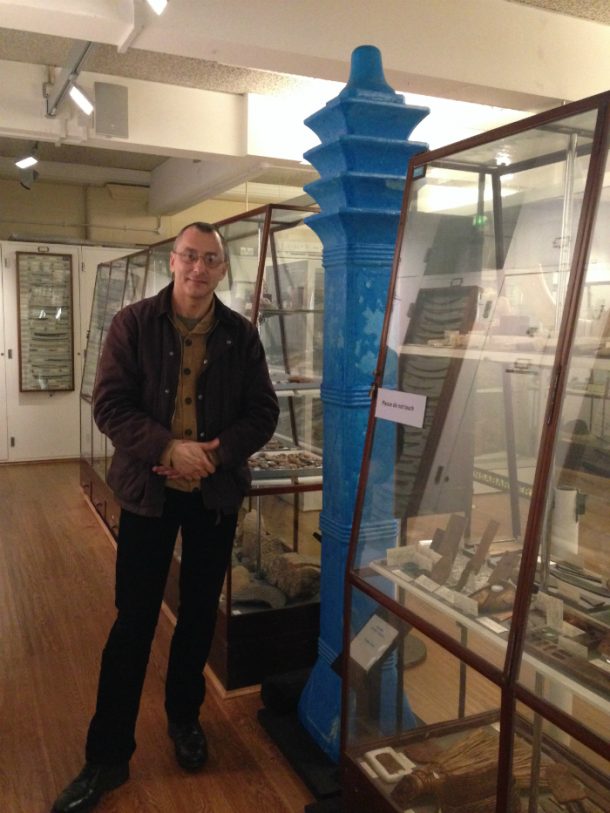 For his PhD research at the University of Westminster, Zahed worked with the collection of the Petrie Museum of Egyptian Archaeology, at UCL, and through scientific analysis and empirical study he developed a body that could be modelled into sculpture. He also studied the V&A’s Was sceptre – dating from about 1425 BC, this is the largest surviving piece of Egyptian faience in the world.

Excavated in 1894 by Sir Flinders Petrie (1853-1942) in a temple of the god Seth in the Naqada region of Upper Egypt, it was presented to the V&A the following year by Petrie’s financial backer, H. Martyn Kennard. It represents the sceptre that was frequently shown in the hands of Egyptian gods as a symbol of their might. Another symbol of power that was often paired with the Was sceptre in Egyptian temples was the Djed pillar. Zahed’s most ambitious work was to create a Djed pillar in faience to ‘pair’ with the V&A’s sceptre. Standing over 2 metres high and weighing over 80kg, it was made from four sections and fired as one piece in a gas kiln – the only one large enough being at the European Ceramic Workcentre in the Netherlands (see the image above).

Zahed was also inspired by the many thousands of ‘U’ Shabtis that survive from ancient Egypt – the small, mostly turquoise figurines that guarded the dead and served them in the afterlife. Instead Zahed has created ‘Nu’ Shabtis, who have awoken in the 21st century and found there is no afterlife, no god of the underworld, and no labours to perform. They are ‘liberated’ and walk among us finding new things to do with their lives. 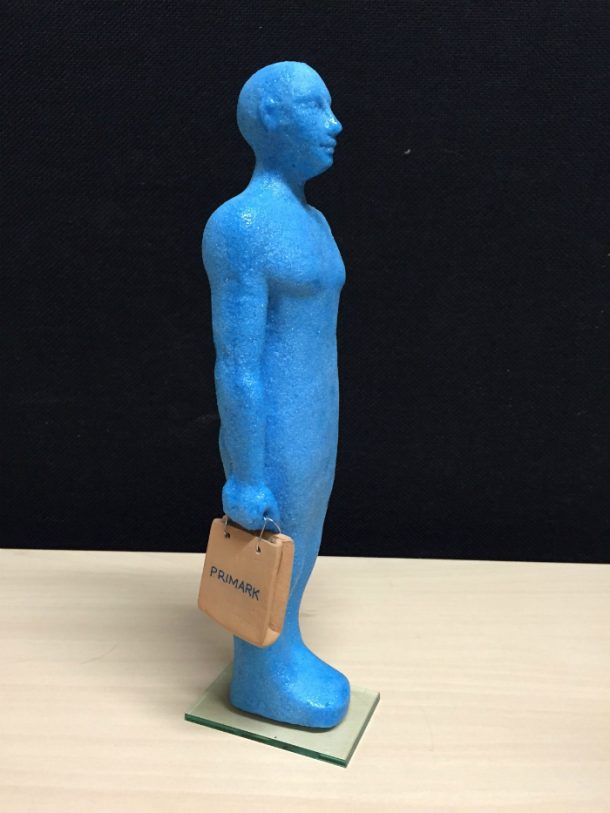 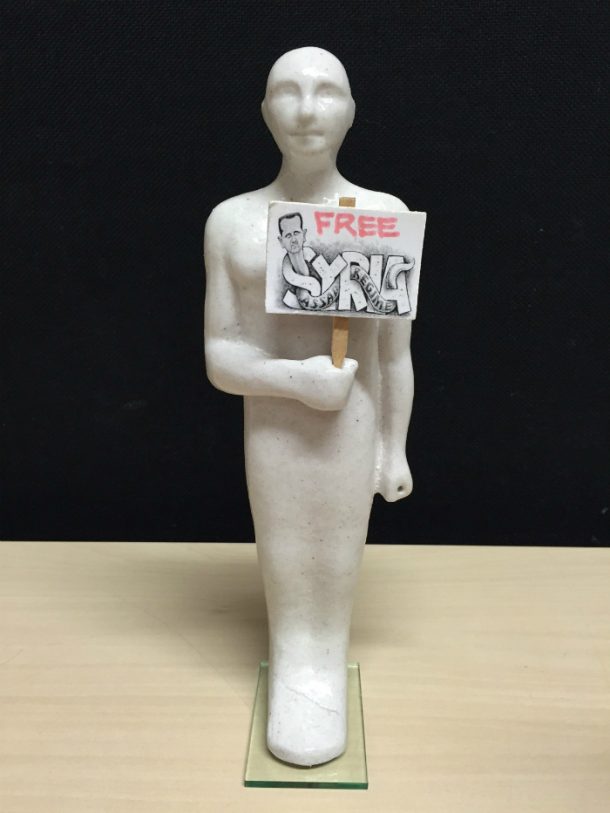 As Zahed describes it, “Some follow our lifestyle and become happy with our activities, our shopping and consumption patterns, and all our gadgets and tools. Other Nu‐Shabtis remain restless and continue searching for freedom and liberty. Some find themselves becoming demonstrators and freedom fighters and joining us in mankind’s eternal quest for freedom. In these varying responses to our modern existence they reflect us all, and also the complications and contradictions of the world in which we currently operate”. 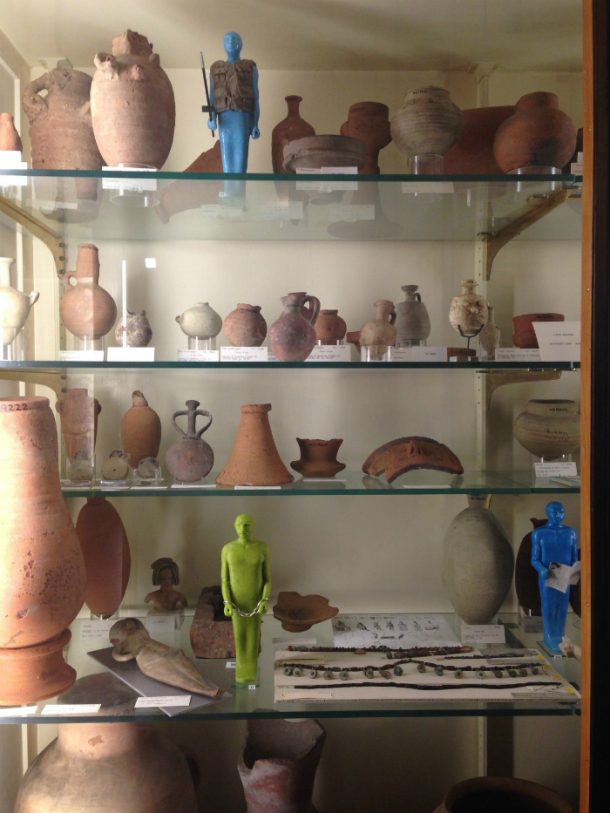 ‘Nu’ Shabti intervention at the Petrie Museum of Egyptian Archaeology, October 2014  – the green figure with the handcuffs is now in the V&A collection (ME.20-2015) (photo: Mariam Rosser-Owen) 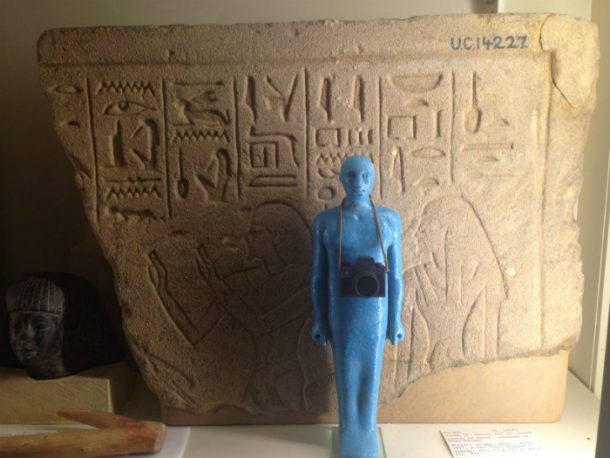 ‘Nu’ Shabti intervention at the Petrie Museum of Egyptian Archaeology, October 2014  – this figure is now in the V&A collection (ME.21-2015) (photo: Mariam Rosser-Owen)

For his PhD exhibition, which took place at the Petrie Museum in autumn 2014, Zahed intervened in the displays, juxtaposing his ‘Nu’ Shabtis with the thousands of archaeological finds from ancient Egypt on view there. The V&A has just acquired six of these ‘Nu’ Shabtis and, inspired by the intervention at the Petrie, we have placed them in various locations around the Ceramics and Islamic Middle East Galleries – can you find them? Here are some clues… 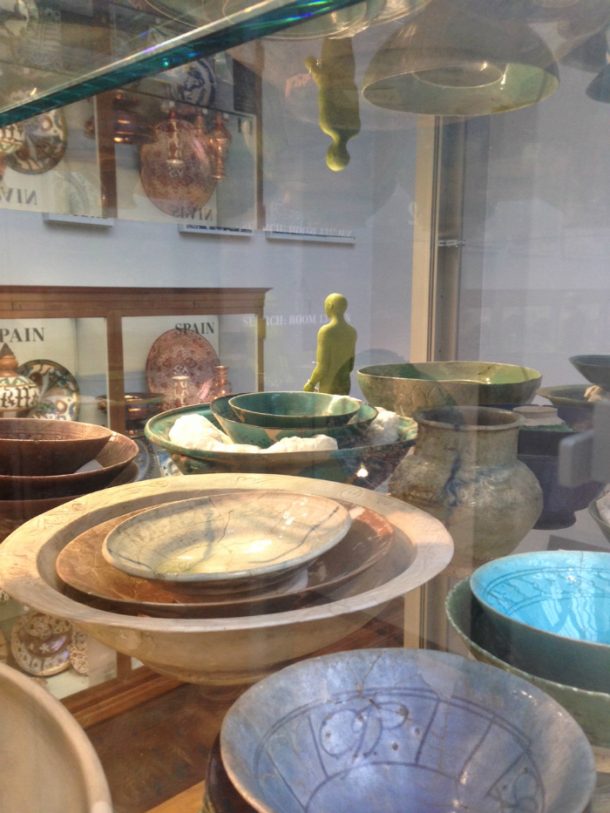 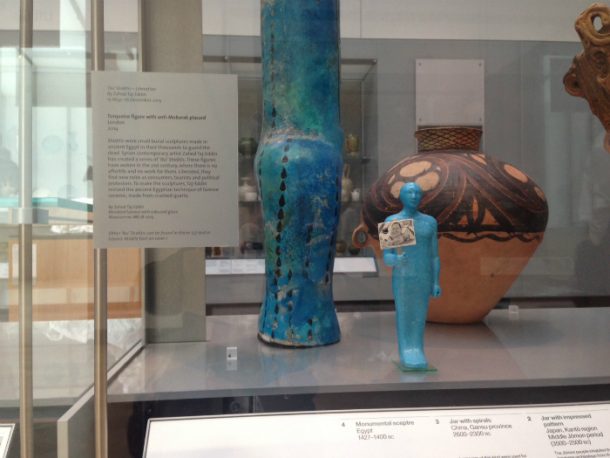 They will be hanging out in the V&A galleries until the end of the year, to coincide with our Damascus Room display and the activities of our ‘Syria season’.

I actually got the chance to see these sculptures. It was amazing… The mix between modern and antique, describing the current culture position is great idea.

Thought these figures as seen on Saturday (15 April 2017) at Manchester Museum were brilliant!