As part of a review of archival documents and photographs relating to the Cast Court’s programme of renovation, Sculpture Conservator Johanna Puisto recently queried several images of a cast of Michelangelo’s David’s head. Searching for details on the mysterious cast, Puisto forwarded the images to members of the V&A’s team responsible for cataloguing the photographs collection. She wrote:

I was wondering if you could advise me. I’ve found several black and white images showing a copy of David’s head. I’m trying to work out where this copy is. Do you know where the plaster head might be and would you be able to confirm whether these images show a V&A cast of David or another David at the Accademia di Belle Arti in Florence?….’

One of the perks of working at the V&A, the world’s leading museum of art and design, is the collection spans across the traditional boundaries that define art historical categories. Expertise relating to the history of objects in the collection is available across disciplines, providing a broad historical context.

These images are part of a collection of photographs recently discovered in the Sculpture Section. The photographs document objects in the Cast Courts. The unidentified staff member who assembled this collection organised them chronologically in terms of the year that the V&A acquired the casts, each image indexed to the corresponding object in the V&A cast collection. Their discovery reveals much about the formation and history of the V&A’s photography collection.

Documents for Artists and Scholars

Beginning in 1852, the V&A commissioned and collected photographs as a way of extending the visual resources of the Museum to artists and students of art and design. Architectural and topographical photographs, as well as photographs of art objects such as these, were collected by the National Art Library to be used as reference material. By the late 1970s, in conjunction with the formation of the Photographs Collection as a curatorial section with the remit of collecting ‘photography as a work of art’, many of the photographs with particular relevance to other departments within the V&A were transferred in bulk to the corresponding curatorial offices. The organisation of these photographs by cast date, and indexing to the V&A’s casts, confirms their status as reference records.

In response to Puisto’s query, I consulted the Museum’s original photographs registers, volumes documenting each photograph acquired by the Museum, recording the date of acquisition and source.  The earliest volume dates from the 1850s and they continue until the 1980s when the Museum switched to a digital record keeping system. The register entry confirmed a hunch I had relating to the photographer of these images. It showed they were taken in 1881 by Isabel Agnes Cowper, the V&A’s Official Museum Photographer from 1868 – 1891 (and most likely the first ever female Official Museum Photographer). Cowper, a widow, lived at the Museum with her four children, having taken over the role from her brother, Charles Thurston Thompson, the V&A’s first Official Museum Photographer who died unexpectedly while on Museum business in Paris. Cowper would have taken the photographs at the Museum, which corresponds with ongoing research  suggesting the bust was cast by Domenico Brucciani, whose  ability to ‘furnish casts of the bust and other portions of [David]’ from his studio in Little Russell Street, London is noted in the Art Journal in 1857.

Many of the fragile original glass negatives taken by the Museum’s photographic service are still intact and are stored in a special climate controlled facility. Two of the Cowper negatives from this set survive, and to my delight, I was able to see that Cowper inscribed her initials in the emulsion, leaving a trace of her authorship.

These photographs, like the casts themselves, were part of a programme of reproduction that was used for instructional purposes (and equally for administrative and inventory purposes).  Available for sale at the Museum, reproductions were also sent out to regional schools of art and design and to libraries, to be used as models for artists and scholars.  These images provide a valuable insight into the development of the 19th century Museum and are works of art in their own right.

Casts and photographs were not the only methods of reproduction employed, there were also electrotypes, architectural models and fictile ivories.  A still life by Cowper, most probably taken in the Museum’s photographic studio, perhaps as an ‘art’ photograph or a ‘practice’ photograph, shows a Museum catalogue dedicated to these objects.

Until recently, Cowper was excluded from the prevailing institutional histories of the V&A’s photographic service; research into her career continues. To date, no image exists of Cowper, except for this early ‘selfie’ with her head hidden under the photographer’s black cloth, serving as an apt metaphor for her exclusion from the historical narrative. 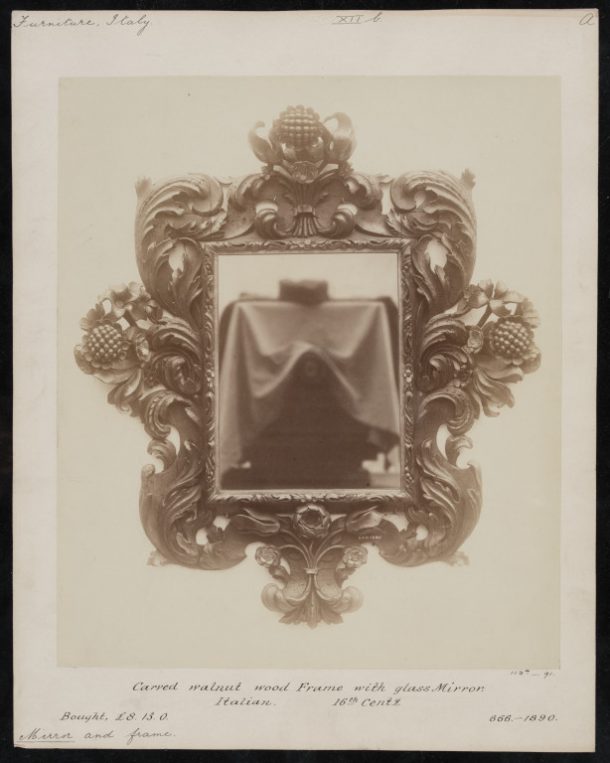