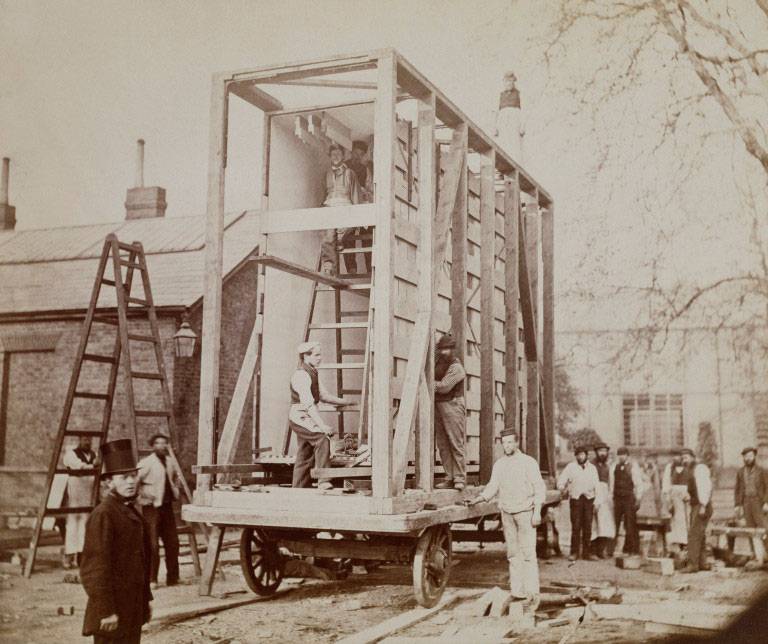 In one of the V&A’s stores, kept particularly cold to preserve them, are a collection of rather unusual photographic works that I have been intrigued by for some years. They are twelve collodion glass plate negatives made in 1858 by Charles Thurston Thompson (1816—1868), the V&A’s first photographer. 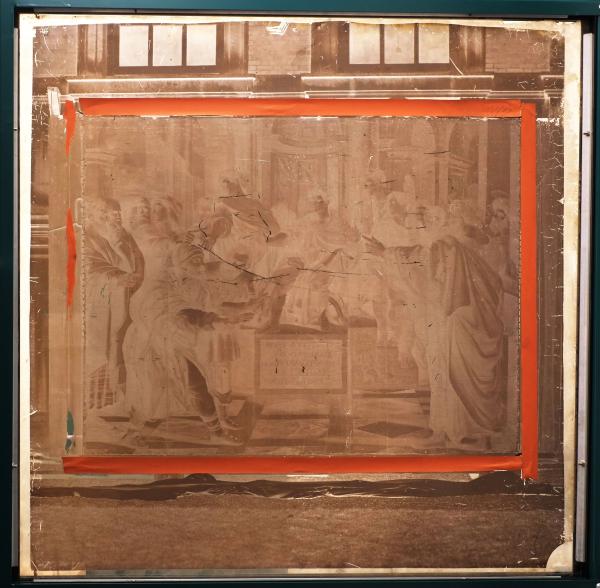 These negatives were used to document the condition of the Raphael Tapestry Cartoons. The Raphael cartoons are full scale designs for the tapestries that were commissioned from Raphael by Pope Leo X in 1515 and intended to hang in the Sistine Chapel. They rank amongst the most important examples of Renaissance art, and have survived remarkably well for very large and complex works of art on paper. On long-term loan to the V&A from the Royal Collection since 1865, they are some of the V&A’s most cherished and most visited objects. They were reunited with the Vatican tapestries at the V&A in 2010 (Watch V&A Curator, Mark Evans and Vatican Museum Curator, Professor Arnold Nesselrath talk about the tapestries and cartoons here),  and while they have been at the museum they have been the focus of a considerable out-pouring of attention and scholarship – not least from the Museum’s conservators. 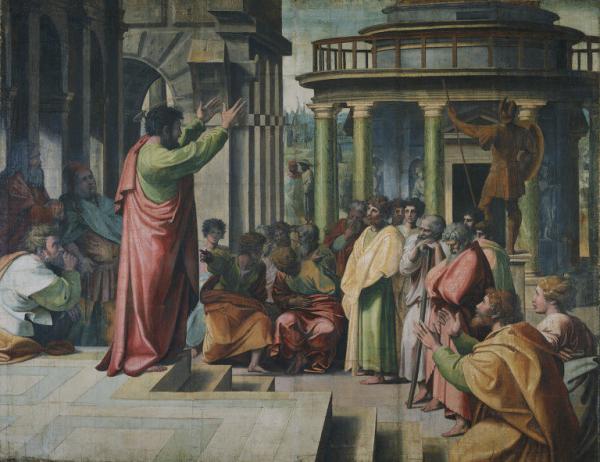 Aside from being fascinating examples of early photography in themselves, these negatives represent one of the earliest and most ambitious uses of the photograph in a museum to document works of art. The surviving glass plates are a staggering 3 feet square and a quarter  of an inch thick. But it is the annotated albumen prints that were made from these remarkable technical objects that are even more fascinating – they are some of the earliest known photographs made to document the condition of works of art: 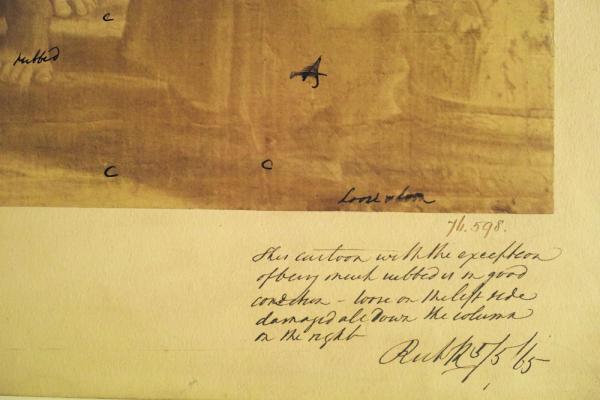 I am currently preparing a large albumen print taken from one of Thompson’s Cartoon negatives for display in the re-hang of the V&A’s History of Photography Gallery which has just opened this month. It has given me a rare chance to examine them in great detail, and understand a little of their history in the museum.

The cartoons are part of the Royal Collection, and at the time of their 1858 documentation, they were housed on the outskirts of London at Hampton Court Palace. The considerable task of photographing them was commissioned by Prince Albert himself, who was compiling a monograph on the works of Raphael. The forward-thinking Prince Albert had already recognised the importance of the photograph as a scientific tool for documentation as well as for creativity, and he turned to Henry Cole, the head of the recently formed Department of Science and Art at the South Kensington Museum (as the V&A was known then) to undertake meticulous documentary photography of the cartoons. 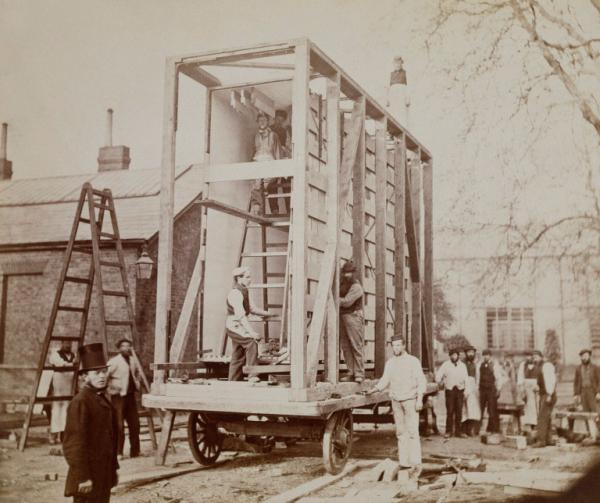 This must surely have been a major undertaking. Certainly, the main challenge for Cole, Thurston Thompson and their team (as you can imagine from the image above) was the sheer size of the framed Cartoons  – they are on average 5m long and 3.5m high without their frames. Similarly, the lack of sufficient natural light in the Cartoon Gallery at Hampton Court Palace made accurate photography in situ almost impossible. However, Cole and Thurston Thompson devised an ingenious solution. On days when they weather was fine, the cartoons were lowered through a gallery window into the court below by a team of technicians, where they were photographed by Thompson in natural light. To house the huge glass plates, a camera of mammoth proportions was designed and manufactured (at the museum) to fit a lens that Thompson had bought specifically for the task in Paris the previous year. One can only wonder at the size of the camera, but this American model from 1900 might give us a suggestion! 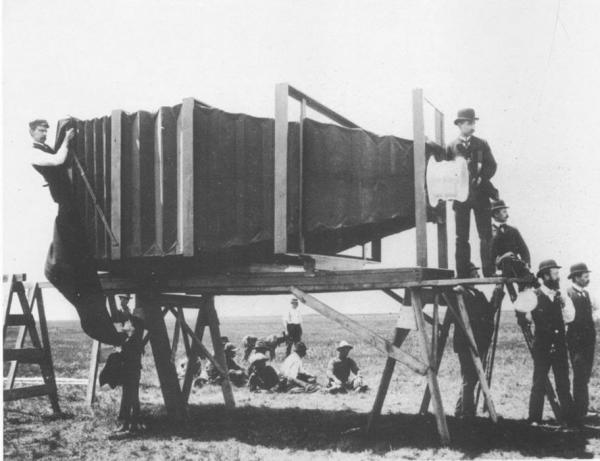 The contact print below, taken from Thurston Thompson’s original glass plate negative, was made in 1865, and is extensively annotated with condition notes by the then Inspector General for Art at the Science and Art Department, Richard Redgrave (1804-1888). Redgrave was also the South Kensington Museum’s first Curator, not to mention an early and keen advocate for the potential of the camera. What is fascinating about these prints is that Redgrave’s inked inscriptions mark in meticulous detail the condition of the Cartoons. In doing so, he created some of the first photographic condition reports. The conventions he used in his annotated photographs in 1865 are still used today by museum conservators throughout the world. 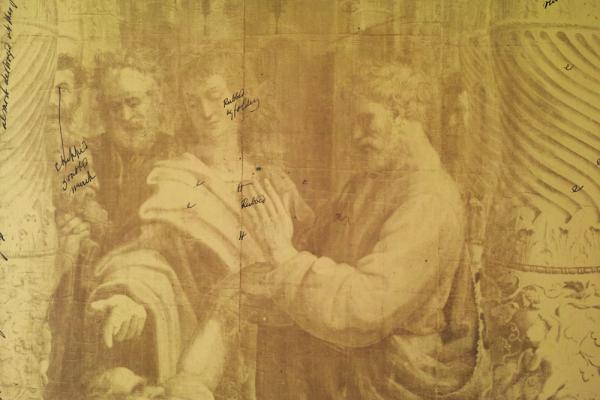 Redgrave recognised the unparalleled descriptive acuity of the photograph as a technical tool, and variants of the same technology were used to document the condition of museum objects for the next 140 years, with analogue photography only supplanted recently (more recently than you would imagine) with the introduction of very high quality digital cameras.

So, even from this very early period of the South Kensington Museum, it’s possible to discern a division between the dual role of the photograph – as an functional tool for recording technical knowledge, and as an artefact of high culture – art versus information – and both were woven into the fabric of the institution. Interestingly Redgrave had serious doubts about the artistic merits of photography, and was vehemently opposed to the collecting of what he called ‘art’ photographs, but thankfully his views did not hold, and the V&A now has one of the finest photographic collections in the world.

The pull of these remarkable photographs has resulted in a research study that I’ve recently started at the Royal College of Art. The practice based project (MPhil/PhD) explores the genesis of the technical photograph at the V&A: a complex mixing-up of photograph and museum. As I make progress with the research, I look forward to posting further details.

Fascinating. Like entering a time-machine. Look forward to developments.