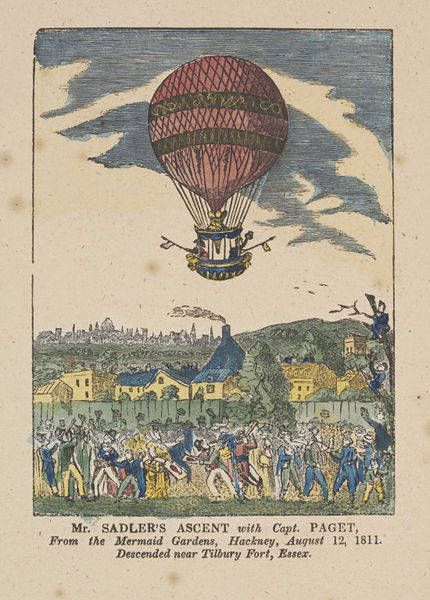 This colourful print of a hot-air balloon flight caught my eye while I was cataloguing a collection of prints and drawings relating to Hackney and other East London boroughs. As it happens to be the 204th anniversary of the event depicted, it seemed the perfect opportunity to share the story.

James Sadler (1753-1828) was the son of a pastry chef, who left the family business to follow his passion for science and engineering. Inspired by stories of the first ever manned flight, made by the Frenchmen Jean-François Pilâtre de Rozier and François Laurent d’Arlandes in 1783 (in a balloon made by the Montgolfier brothers), in October 1784 he became the first Englishman to fly, having constructed his own 170 foot balloon out of silk and paper.

This feat made him an instant celebrity, ‘known from the humble cabbage seller to the mightiest of lords’ according to the London Chronicle, and he was invited to events all over the country to give demonstrations and add a touch of spectacle, including opening the Jubilee celebrations in 1814.

In 1811 the occasion was the birthday of the Prince Regent: if you look closely at some of the prints you can see GPW, for ‘George, Prince of Wales’, on the side of the balloon. The balloon took off from the pleasure gardens of the Mermaid Tavern in Hackney, whose sign you can see in this satirical print by William Elmes. This print also gives a great sense of the excitement among the crowds, with everyone jostling to get the best possible view, and climbing on anything they can find, even other people! Around 3000 people are thought to have attended, blocking the roads for miles around.

On this ascent Sadler had a paying passenger, a naval officer named Captain Paget who paid 100 guineas for his seat (around £3500 in today’s money, according to the National Archives’ currency converter. In the next print you can see the two men happily waving flags from the balloon’s gondola-shaped basket.

I love the details in this print, from the little boy taking advantage of the confusion to pilfer a bread roll from a vendor’s tray to the enterprising woman selling prints of the balloon to commemorate the occasion.

The flight lasted just over an hour, and the balloon came down safely in a cornfield at Tilbury Fort, Essex. Incredibly, Sadler survived 50 balloon flights over 40 years, and died peacefully at home at the age of 75. Long forgotten, recently his legacy as Britain’s first aeronaut has been reassessed and he has been commemorated by Oxford University and the Royal Aeronautical Society. In 2007 a ballooning company recreated his first flight from Christ Church Meadows in Oxford (http://www.chch.ox.ac.uk/news/2007/ballooning-history).

Finally, we’ve only just missed the anniversary of another balloon flight that took off from the Mermaid Gardens, so I thought I’d share this picture. On the 9th of August 1837 Mrs Graham, Mrs Adams and Miss Dean ascended in the Royal Victoria balloon, becoming the first female aeronauts to fly without a man.

I’ll leave you with this gif of the flight, just because it made me smile…

Great prints. As you say, they include such lovely details.

50 flights in 40 years is quite a feat by James Sadler. What a brave chap.

Thank you so much for publishing these pictures of the Mermaid Pleasure Gardens, and for providing some valuable historic detail bout them.
I am researching the lives of my Great x 3 Grandfather and his daughter,Sarah Heath Clayton, who in 1817-1818 kept a shop “opposite the Mermaid Hackney” as milliner, haberdasher, dressmaker and dealer in straw bonnets.” (from details of insurance with Royal & Sun Alliance). I think they chose the location of their shop well, considering the popularity of the inn and gardens opposite.