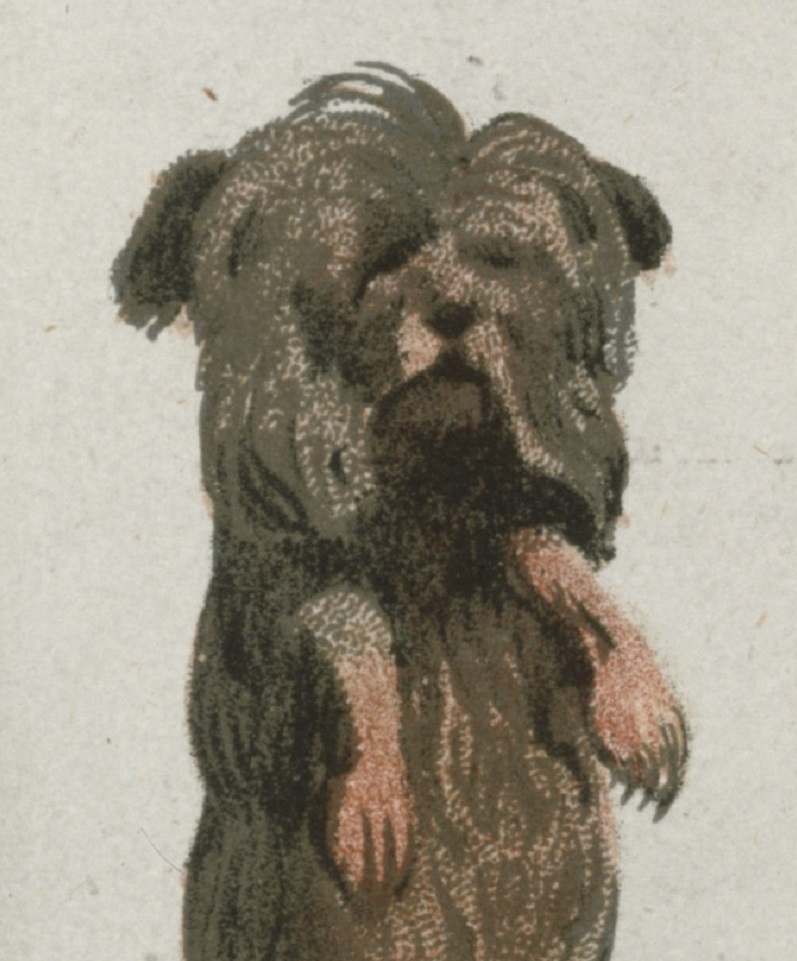 This blog was prompted by an enquiry we received recently about the two commemorative plaques for ‘Jim’ and ‘Tycho’ set into the wall in an obscure corner of the V&A’s John Madejski garden.

49 Wilton Place [Higher Broughton, Manchester]: Jimmy our little dog died of Asthma & Cold. nearly 16 years old. He died very quietly with Rose at 5.30 AM. He is portrayed in Punch with me, & was a character in the Museum. put in a box & sent to Mr Groser.

Cole had previously taken Jim, his Yorkshire terrier, out for a walk on 15th January when he recorded that the weather was sunny and mild, although it subsequently turned frosty and there was snow on the ground on the 25th. The diary gives no indication of Jim’s impending demise, although given his advanced years it can have come as no great surprise. In fact, the family seems to have been prepared for it: the lady named Rose (b. 1852), who was with Jim at the end, was Cole’s fifth daughter.

Cole’s use of the diminutive (Jimmy), the only such occurrence in the diary after 1863, aptly conveys his affection for his faithful companion. He was mistaken, however, with respect to their portrayal in Punch. It was Vanity Fair (9 August 1871) that published a chromolithograph caricature of ‘King Cole’ with Jim, looking a little like an Ewok, perched on his hind legs.

In fact, so closely were they identified with one another that Sir Christopher Frayling chose to open the inaugural Henry Cole Lecture in October 2008 with an amusing account of Cole and his pooch.

We cannot be absolutely certain of the identity of Mr. Groser, although he seems likely to have been W. G. Groser, who worked for 40 years as a Storekeeper at the South Kensington Museum (he is first mentioned in Cole’s diary entry for 12 November 1853). Nor is it clear from Cole’s diary what he intended Groser to do with Jim: store him among the Museum’s animal products collections, stuff him? Presumably bury him? Such was Cole’s lasting fondness for Jim – and the terrier breed – that he recognised him in other dogs – ‘Mrs Chesebrough left a little Terrier like Jim and came to fetch him’ (Monday, 21 February 1881) – and was inclined to identify other people by reference to their dogs – ‘Spoke to the Neighbours who own the Skye Terriers’ (Sunday, 6 February 1881).

Jim’s first appearance in Cole’s diary comes quite without warning: ‘Walked out with Tishy & Jimmy’ (11 December 1863); unsurprisingly for a private diary, Cole has no need to introduce the newest member of the family. Thereafter, we find sporadic references to Jim throughout the diaries until 1879. We learn that Cole and Jim frequently strolled around the Royal Horticultural Gardens and that Cole, who rose early, invariably took Jim to work with him, where his behaviour could be somewhat disruptive: ‘In Museum with Jim, who barked as usual’ (Sunday, 11 January 1874).

On a foggy December morning they also ventured out to Kensington Gardens ‘to see the lay of the ground for the Site for Albert Memorial’ (Friday, 26 December 1867). We learn from his financial accounts at the back of the diary that Cole had an enamel likeness of Jim made (April 1866). I wonder what became of this canine-related keepsake? Jim was also well travelled. In February 1867, he accompanied the Coles on an extended trip to France, principally to Paris and Boulogne (no need for a pet passport!), where Cole walked Jim along the pier (Thursday, 26 September 1867). Like most dogs, mild mannered Jim got into the odd scrape, although in the eyes of his indulgent master he seems not to have been to blame: he was bitten by another dog (Cole underlined this entry in his diary), possibly in the grounds of Chatsworth (Thursday, 10 September 1868).

While staying at Broadstairs, Kent, in October 1864, Cole made this series of sketches of Jim, which he presented to Lord Hawarden. It was during this visit that Jim disappeared while he and Cole made a round trip to Ramsgate over the cliffs; he later arrived home safely of his own accord, to Cole’s great relief (Thursday, 27 October 1864).

But what of the pet commemorated by the other plaque – Tycho? It has long been assumed that Tycho was Jim’s successor (he would have survived Cole by only three years). The plaque, however, is frustratingly vague. Tycho was certainly known to Cole. In his diary entry for Wednesday, 10 August 1881, we find the following: ‘Alan called. Pickle attacked Tycho!’. Did Tycho – and/or Pickle – belong to Cole? Was the arrival of Alan (1846-1934), Cole’s son, unconnected with the subsequent dog fight or did Alan bring with him his own pet dog, which resulted in a territorial dispute? If so, was Alan’s pet Pickle or Tycho? This was not the only documented act of aggression by the innocuously named Pickle: we read in Cole’s diary entry for Sunday, 12 February 1882, that s/he ‘killed a kitten’ during a walk in Philbeach Gardens (near Earl’s Court).

Any doubt as to the identity of Tycho’s owner, however, is cleared up in Cole’s diary for Saturday, 4 February 1882: ‘Out in Gardens with Tycho, Alans Dog’.

Given that Jim and Tycho have plaques, should Pickle not have one too?