A stereograph is composed of two pictures mounted next to each other, viewed with a set of lenses known as a stereoscope.  Taken around 7cm apart, roughly corresponding to the spacing of the eyes, the left picture represents what the left eye would see, and likewise for the right, so when observing the pictures through a stereoscopic viewer, the pair of photographs converge into a single three-dimensional image.

This optical marvel took the world by storm in the mid 19th century, becoming the first ever mass-produced photographic images sold, and a precursor to the motion picture phenomena.  They were so popular that it is said that every Victorian home—regardless of class—had a stereoscope and a collection of views sold in a range of prices.  There were numerous, cheap, card-mounted views alongside more costly types made of porcelain – or glass, such as this one (click on the images for more information): 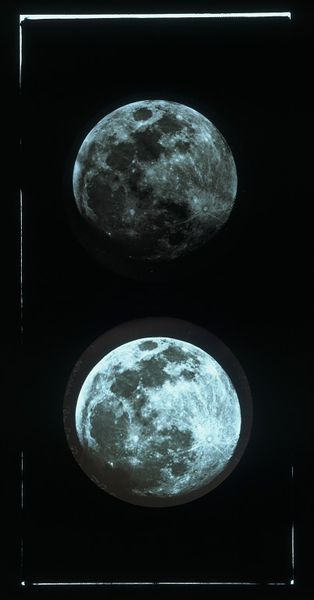 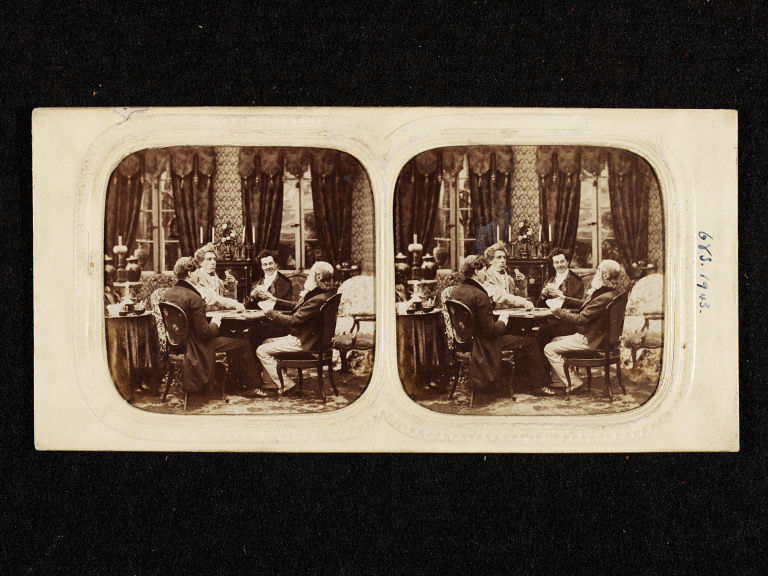 …as well as hand-coloured or tinted views: 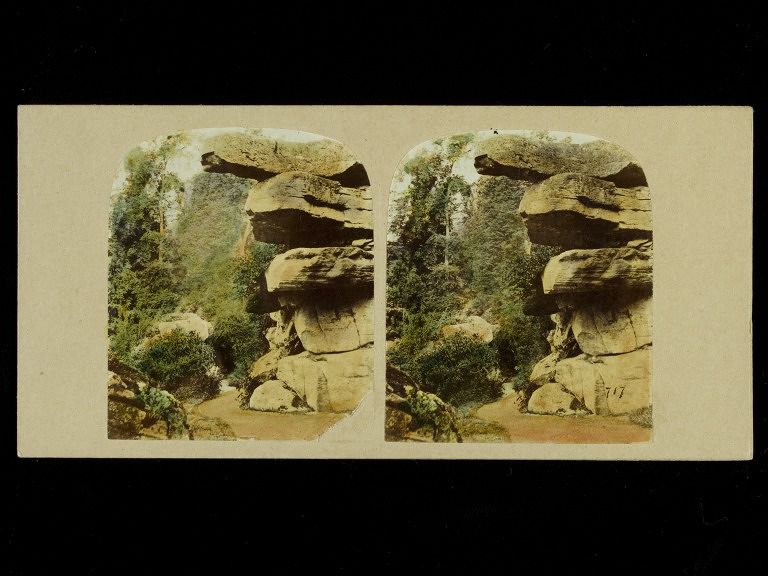 There were also differing printing styles as photographic processes evolved, including tintypes, ferrotypes, and Daguerreotype stereographs like this vignette of a scientist at work: 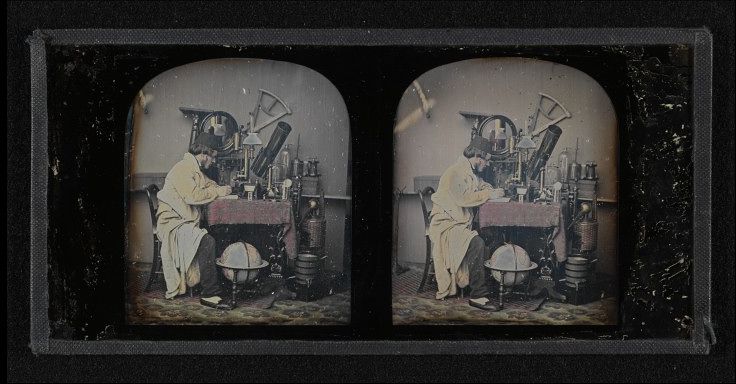 The original stereoscopic apparatus was invented in 1838 by Sir Charles Wheatstone from Gloucestershire, in the year of the birth of photography, yet his early experiments employed drawings instead of photographs, viewed through a system of angled mirrors.  Stereoscope design has been revisited and improved upon over the years, but it was Wheatstone who first brought the phenomena to life.  An early improvement to the design was made by the Scottish physicist David Brewster, who replaced the mirrors with prisms in 1844, creating the ‘closed-box’ or lenticular stereoscope (similar in concept to the 20th century View-Master format).  Brewster is also credited with inventing the kaleidoscope and modernising the British lighthouse system.

Stereoscopes gained international recognition at the Crystal Palace Exhibition or Great Exhibition of 1851, which was photographed by T. R. Williams for the London Stereoscopic Company: 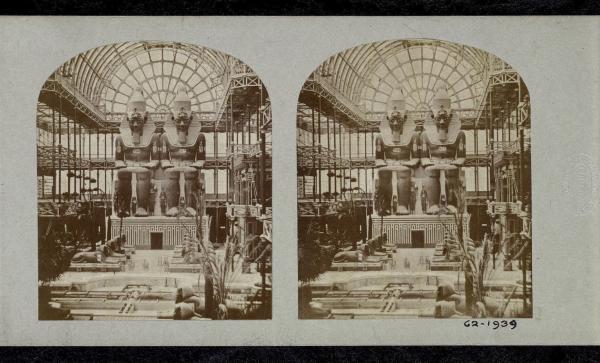 Queen Victoria was greatly impressed by the stereographic equipment at the exhibition, displayed by the pioneering French photographer, Jules Duboscq.  With her enthusiasm and seal of approval, their appeal was boosted to such an extent that by 1856, more than half a million viewers had been sold and the vogue spread to America.  A new type of device known as the Holmes stereopticon or the American stereoscope was promptly invented by Oliver Wendell Holmes, an open viewer utilising natural light, which would go on to dominate the market between around 1880-1940. 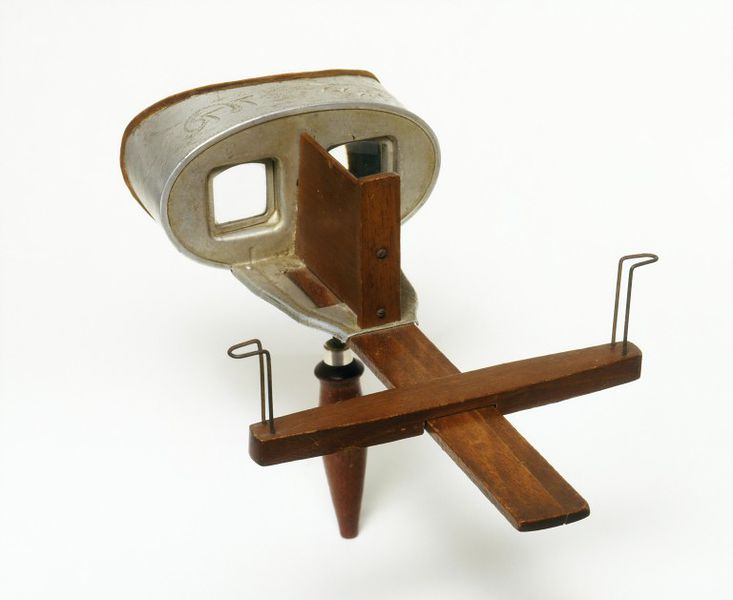 Large companies such as Negretti & Zambra, Underwood & Underwood and The Keystone View Company were soon commissioning photographers to travel the length and breadth of the world, publishing tens of thousands of views a day towards the end of the 19th century.  Popular themes included the engineering wonders of the industrial age like the building of skyscrapers and the American railroads, alongside the travelogue or sightseeing slides depicting almost every corner of the globe.  These views assisted in ushering in the first waves of tourism and travel to a wider public, including views of the pyramids and tombs of ancient Egypt: 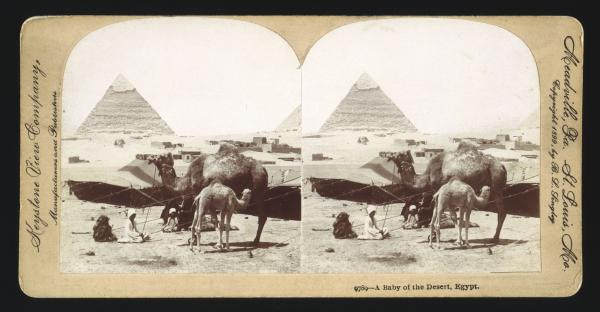 Buddhist ceremonies and temples in Japan 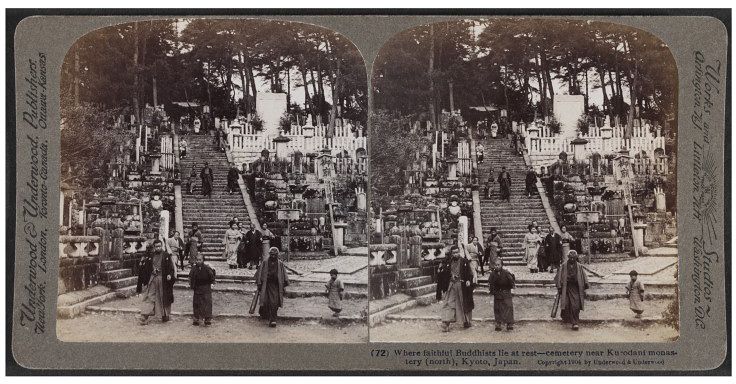 …the palaces of Scotland 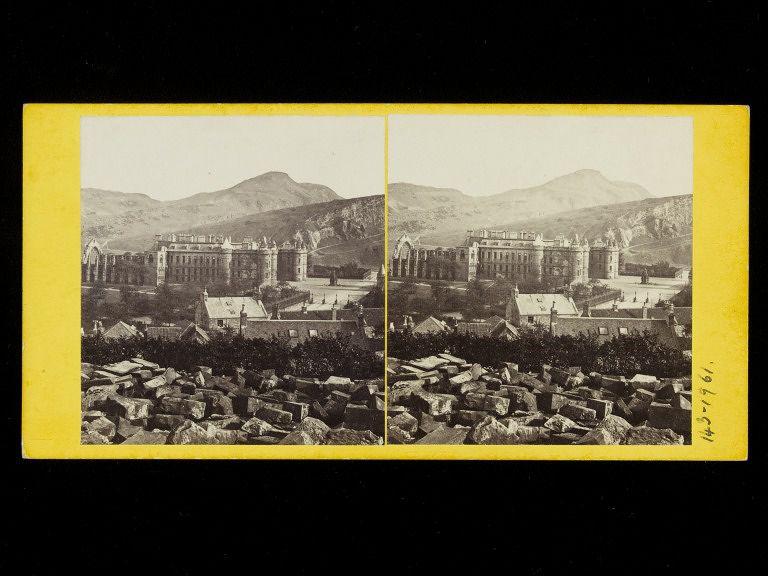 …and the Mayan ruins at Copan in western Honduras. 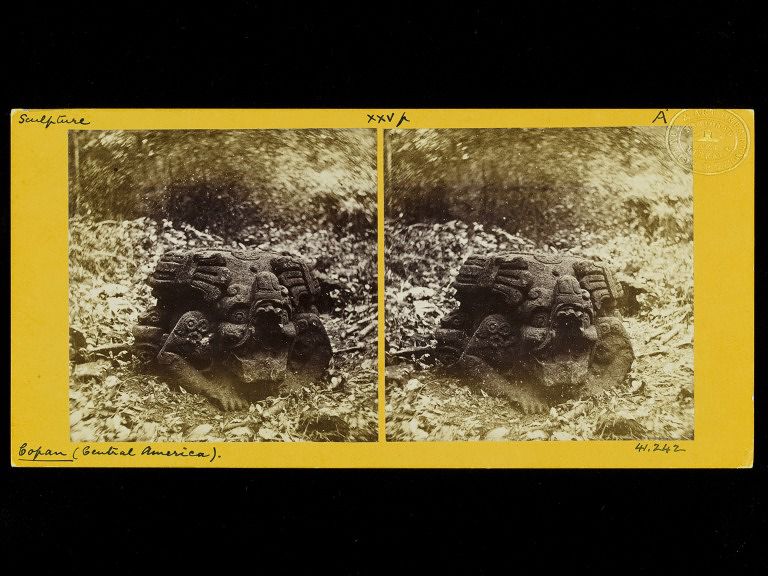 Before long, there were comical and novelty views, peep-show style pictures, educational box sets for schools, and news-related sets portraying disastrous events like the Great Fire of Chicago in 1871 and the aftermath of hurricanes and floods.

Eventually one of the largest producers, the Keystone View Company, cornered the market and by 1921, owned the negatives and catalogues of almost all their competitors.  However, over the next twenty years, the concept had been completed overtaken by the rise of cinema and television so Keystone shifted to manufacturing ophthalmic equipment, tieing in neatly with the origins of the stereoscope’s invention by optical engineers and scientists.

They were rebranded as a child’s toy and once again made their debut at a World’s Fair, this time in New York, 1939.  View-Master and Tru-Vue were the leaders of the new formats, issuing a number of colourful, plastic models, several of which are on display in the V&A Museum of Childhood at Bethnal Green.

These new companies still produced the traditional scenic views, among the most popular were the Grand Canyon and Yellowstone National Park scenes, but these were gradually replaced in favour of cartoon characters and television stars, thriving between the 1960s and 1980s.  It was only in 2009 however, that the scenic views were finally discontinued completely.  171 years of overall production have left a staggering topographical record of several million stereographs, held in the collections of universities, museums, and private owners, comprising the work of thousands of largely anonymous jobbing photographers who documented a rapidly changing and multifarious world.

15 comments so far, view or add yours

hi, i have recently had restored a brewster stereographic viewer. nothing new i hear you say! however, this viewer is covered in total in a decoration of mother of pearl. the viewer was originally bought at a small west yorkshire auction in 1969. then it sat until one month ago in a small antique shop. the owner could not access a restorer who would be able to restore the viewer. i had it gifted as part of a settlement for work completed for the previous owner. my restorers then got to work. now it is complete, and i am trying to find out who would have made such a beautiful item in such opulent materials. i would be thankful of any advice on the maker, if known? best regards, martin.

I am currently doing research on the ‘arched frame’ in (stereoscopic) photographs.
To this point I haven’t been able to find an answer to the question of the use of this format for some of these images.
I would be delighted if someone could provide me with background information on this topic.
best regards, Tessa

Ping a mail off to the Tate Gallery, they will give you your answer. If they don’t, they will engage Brian May who is a world renown expert on stereo graphs.

I hope that helps.

I’m looking for a stereoscopic projector such as a viewmaster to use for one day, perhaps someone is aware of a place in London where such items could be hired or found in archives? I know this is unlikely however I want to give it my best attempt

It would be better if the stereoscopic images were all shown as a full pair as the OWL spectroscope made by the London Spectroscope Company works well on a tablet – the Images on this page where the full pairs are shown I have been able to enjoy with the OWL but of course where the picture shows only part of the pair it only shows that there were originally 2 photographs.

Do they repoductions of the stereoscope cards ?