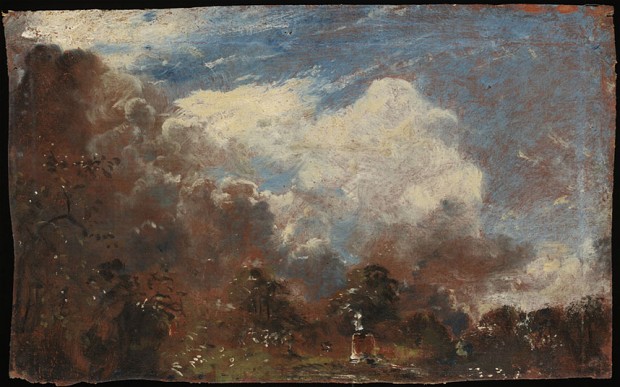 V&A Paintings Conservators Nicola Costaras and Clare Richardson have discovered a previously unknown oil sketch by John Constable in the V&A’s collection. The original sketch, ‘Branch Hill Pond, Hampstead’, had been glued to a canvas lining at some stage before it came into the V&A’s collection in 1888, completely obscuring the sketch on the other side. Suspecting that there might be an earlier composition that Constable had painted over underneath Branch Hill Pond (Constable was known to have reused canvases on a number of occasions), Nicola and Clare X-rayed the sketch, and were surprised to find that the composition they were looking for was in fact a completely intact sketch painted on the back.

If you compare the X-radiograph with both the original sketch, and the newly revealed sketch below, you can see that some highlights in the sky of the hidden sketch are visible, as are small highlights on the leaves of the trees and bushes at the bottom right. Because these elements were painted with a white pigment that contains lead, they block the passage of X-rays and so they appear white on the final image. Constable likely painted these highlights to reflect the subtle light caught on leaves still wet from a passing shower, but as you can see, they were part of the key to identifying the presence of the hidden sketch. 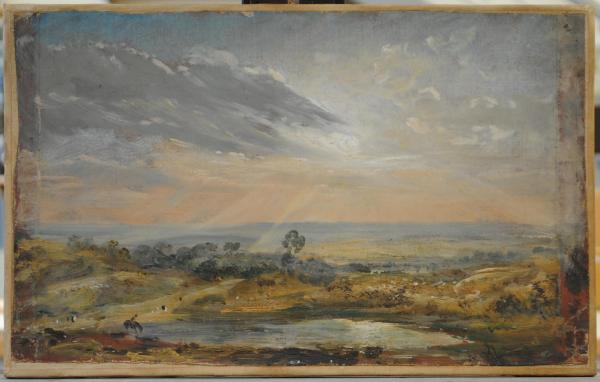 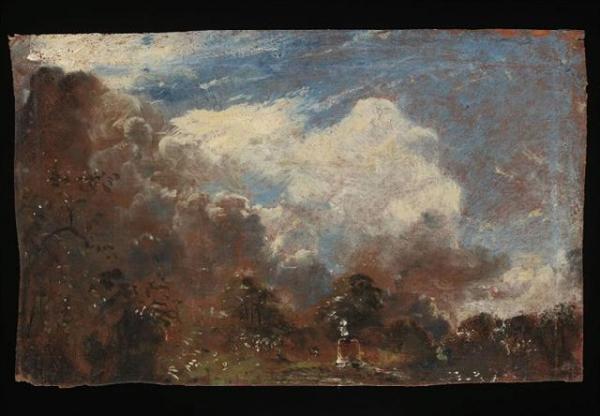 Nicola and Clare discovered the sketch whilst preparing works for the Museum’s major autumn 2014 exhibition Constable: The Making of a Master. As the old glue and canvas lining had become loose in some areas, they decided to remove it completely to examine the reverse of the sketch. Carefully removing both canvas and glue, they managed to reveal the sketch in its entireity. The new oil sketch above (which has been given the title, ‘Landscape with a kiln’) depicts a narrow clearing fringed by trees set against an unsettled sky, a wedge-shaped expanse of dark clouds at lower left parts to reveal a stretch of blue sky with white clouds. In the foreground a brown cylindrical structure with a waft of smoke is visible, most probably representing a kiln.  The newly discovered scene was probably made in the late summer of 1821 or 1822 when Constable painted a number of sketches featuring similar cloud studies and motifs, as seen in another of the double-sided oil sketches in the V&A’s collection, ‘Branch Hill Pond: Evening’, which also probably dates from those years. 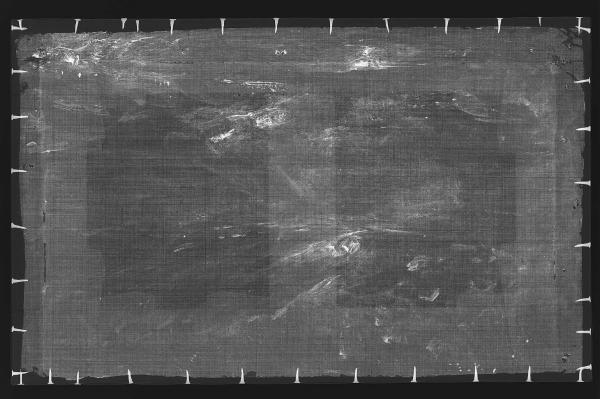 At present only the new sketch is being displayed, but for the exhibition, we felt that it was important to be able to show both sides of the sketch, and this is not without its challenges. As you can see at the edges of the the X-radiograph, the tacking margins of the hidden sketch were folded out, flattened and then painted over, suggesting that the scene on the front was painted with the canvas pinned to a solid support (possibly the lid of the artist’s paint box which he used for sketching in oils outdoors). The composition extends to the edges on both sides of the canvas, and so attaching any additional material for the purposes of mounting and framing the sketch is not easy. Below you can see Clare attaching Japanese paper strips to the threads at the very edge of the canvas under a microscope. This method allows the sketch to be mounted to show the full composition, but without having to attach anything to the painted edge of either side. 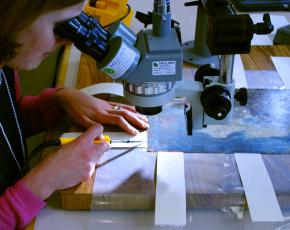 Constable at the V&A

The V&A holds 92 oil sketches by Constable, and includes sketches for two of his “six footers” , one of which is for perhaps his most famous painting, ‘The Haywain.’ These two sketches were also examined and conserved by Nicola and Clare in 2010. (You can read about the results of their x-radiographic study of the six footers here).

In 1888 Constable’s last surviving child, Isabel, gave the remains of her father’s studio contents to the South Kensington Museum. This consisted of  three easel paintings, 92 oil sketches, 297 drawings and watercolours and three sketchbooks. Constable is known to have been thrifty with his artist’s materials and sometimes painted sketches on both sides of a support, which were typically of homemade paper laminate, panel, millboard or sometimes scraps of reused canvas. However, only six of the oil sketches bequeathed to the V&A were previously known to be double-sided.

In his open-air oil sketches, Constable applied colour in a variety of ways. He painted in both rich impasto and glazes, using heavy dots of bright colour and light touches of pure white to highlight and capture transient effects of light and atmosphere. Quick strokes with a brush bearing only a small amount of paint gave a dappled ‘dry brush’ effect, allowing the colours underneath to show through. Constable attempted the same fresh and rapid techniques when working on the final canvas back in his studio. He intended the varied paint surface to be examined close-up as well as viewed from a distance.

The new discovery can be viewed at the V&A in the Edwin and Susan Davies Galleries (Room 88), and will also be on display in the V&A’s autumn exhibition, Constable: The Making of a Master opening on 20 September 2014.

To find out more, a detailed essay about the discovery by Senior Curator Mark Evans and Paintings Conservators Clare Richardson and Nicola Costaras is published in the December issue of the Burlington Magazine