Are you looking forward to Valentine’s Day? I ask because this is one of the few holidays the mention of which is as likely to be met with a snort of derision as a sigh of anticipation. As Valentine’s Day is often accused of being a so-called ‘Hallmark holiday’, invented (or at least perpetuated) by companies to sell greetings cards, I thought I’d explore the origins of commercial valentines through some of the objects in our extensive collection. These cards and many others are available to view in the Prints and Drawings Study Room.

The tradition of sending love tokens and notes on 14th February has been around for hundreds of years, with the earliest surviving valentines dating from the 15th century.  Early valentines usually took the form of handwritten notes or poems, and it wasn’t until the 1800s, with the availability of cheap paper and development of new printing techniques, that making valentines really became an industry. 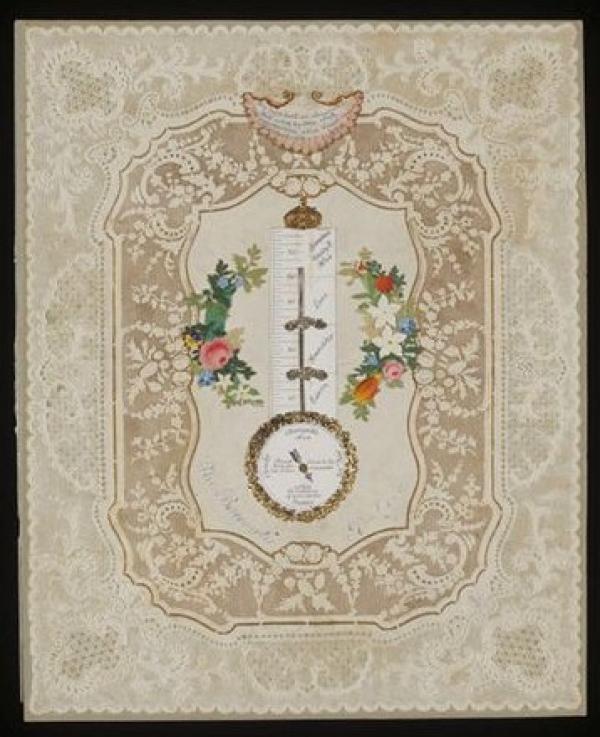 Many Victorian Valentine’s cards, including the beautiful ‘Barometer of Love’ card above, incorporate paper lace in their design. This technique is said to have been discovered by Joseph Addenbrooke in 1834 when, while working on making embossed papers for a company called Dobbs, he accidentally filed off the raised part of the paper and was left with a pattern of tiny holes that looked remarkably like delicate lace. If you look closely, you can see that many of the cards in our collection carry makers’ marks for Dobbs, and for Addenbrooke himself, who later set up his own company. These companies made some cards themselves, and also sold the paper for others to use.

The valentine industry grew throughout the 1800s, and up to 60,000 cards were sent in 1836. This greatly increased with the advent of the Penny Post in 1840, and by 1886 so many cards were being sent that the Post Office had to issue a notice asking people to post them as early as possible to avoid overloading the system. The cheaper post also led to an increase in the market for mass-produced printed cards. 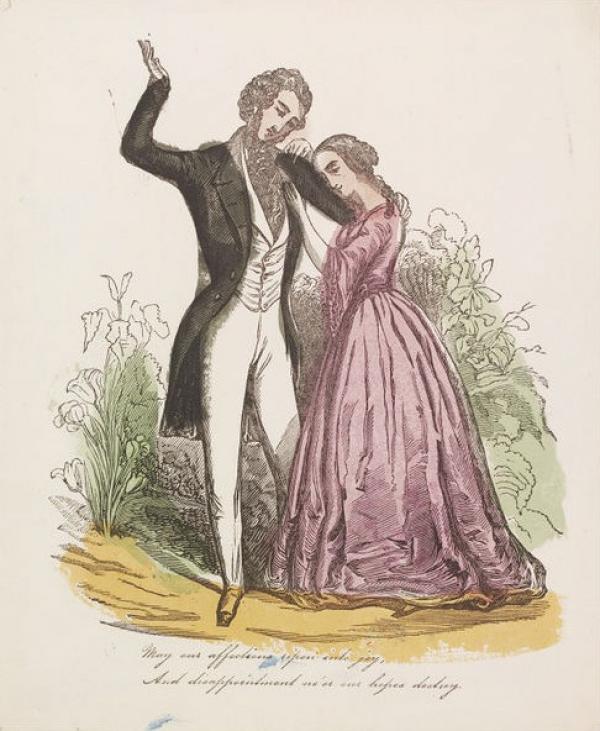 Typical of these cheaper cards, this valentine is printed on thin paper and the blocks of colour are quite clumsily stencilled – I’m not sure that the lady who received this would have been very impressed with her suitor…

The post also brought anonymity, which allowed more racy cards to be sent – we have one card in the collection where a lady’s crinoline can be raised to reveal a scandalous glimpse of red-stockinged ankle – and increased the popularity of ‘vinegar valentines’, cards with vulgar or cruel messages designed to have the opposite effect to a traditional valentine. I’m very glad that this tradition seems to have died out with the Victorians!

This card, from around 1860, may have been sent to ward off a potential suitor, or perhaps to warn someone that their lover was not what he seemed. Like the card we saw earlier, these vinegar valentines were usually printed cheaply on thin paper and, to add insult to injury, before the postal reforms it was the receiver who would have to pay for postage rather than the sender!

On the other end of the scale, we have several cards in the collection made by Eugène Rimmel (1820-1887), a 19th century perfumier and father of the Rimmel London cosmetics brand. The enterprising Monsieur Rimmel diversified into the booming Valentine’s card market (scenting all his cards with perfume, of course) and collaborated with artists such as Jules Chéret to produce some of the prettiest and most sophisticated cards of the time, such as this forget-me-not card, part of the ‘Language of Flowers’ collection. 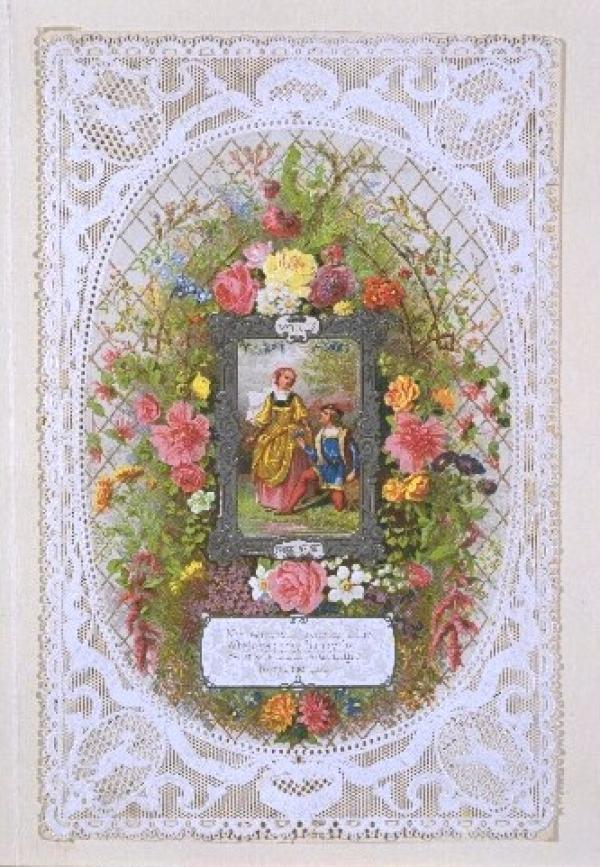 Each flower symbolised a different message to send your beloved – the forget-me-not is one of the more transparent!

Rimmel’s business was a great success, and at its height employed 150 women in his card factory on the Strand, painstakingly decorating cards by hand with fabric, feathers, printed scraps and tinsel. Men were known to spend up to a month’s wages on buying the most elaborate cards to demonstrate their love. 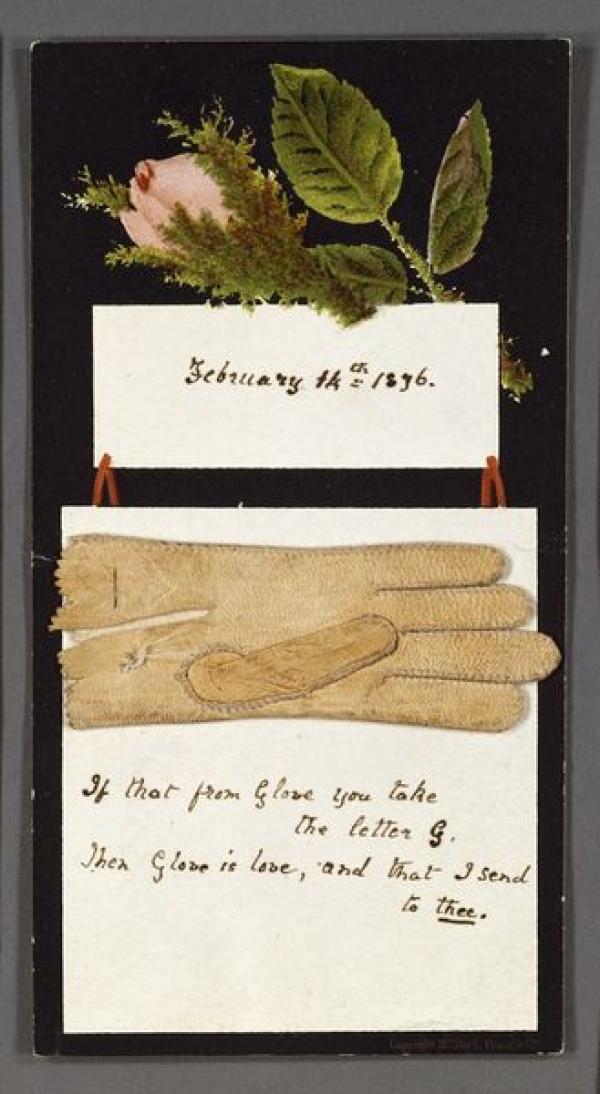 After all this commercialism I thought I’d end with something a bit more personal. This handwritten card with a glove attached may have been intended as a marriage proposal, as tradition had it that if a man gave a woman a glove on Valentine’s Day and she wore it on Easter Sunday, it meant she reciprocated his love. The poem on the card, which will either make you smile or cringe, reads ‘If that from love you take the letter G, then glove is love and that I send to thee’. Happy Valentine’s Day everyone!

Thank you for your very informative blog. I am a member of the Adams County Historical Society located in a very small town in the mountains of central Idaho in the U.S.A. We are going to do a historic greeting card exhibit this year at our restored railroad depot (www.historicpindepot.com). We are a non-profit organization and will not be selling any reproductions of the cards. They are for information and example purposes only. Your blog is the first place I have seen that explains how the paper “lace” was made.