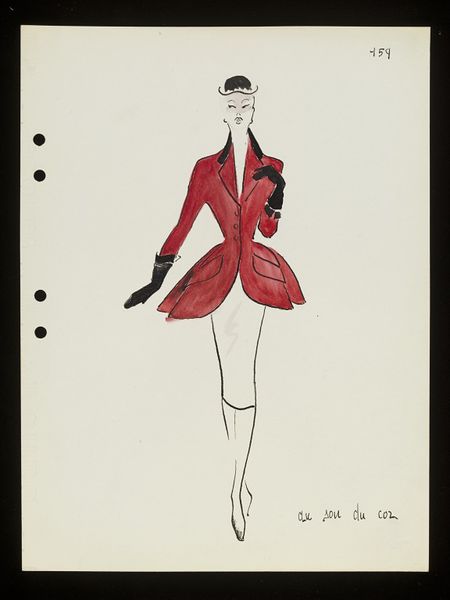 In the world of fashion since the 20th century, many dresses have names that were given to them during the design process. Among the most famous examples are ‘Bar,’ the cream and black skirt suit that became the most widely recognised ensemble from Christian Dior’s 1947 ‘New Look’ collection; and ‘Sorbet,’ Paul Poiret’s 1913 kimono-styled, lampshade-skirted dress. This is not standard practice across all couture and design houses, but it is widespread enough that it is common for a dress to have a title, like a work of art. For the business, it offers a means of swiftly identifying a design, where a client might ask for the dress called ‘Roxanne’ rather than struggling to remember whether it was model X525 or X526, or vaguely saying they liked the ‘black dress.’

In the late 1890s Jeanne Paquin was one of the first couturiers to establish the tradition of naming their dresses. Her London-based contemporary, Lucile, was also noted for the practice, creating ‘gowns of emotion’ which bore names as colourful as their gorgeous fabrics. This drew the satirical eye of the social commentator and novelist Marie Corelli, who described her visit to a Lucile fashion show:

‘Faint gigglings shook the bosoms of the profane as the “Incessant Soft Desire” glided into view, followed by “A Frenzied Song of Amorous Things,” – indeed, it would have been positively unnatural and inhuman had no one laughed.

Curious to relate, there were quite a large number of “gentlemen” at this remarkable exhibition of feminine clothes, many of them well-known and easily recognizable. Certain flaneurs of Bond Street, various loafers familiar to the Carlton “lounge,” and celebrated Piccadilly-trotters, formed nearly one half of the audience and stared with easy insolence at the “Red Mouth of a Venomous Flower” or smiled suggestively at “Incessant Soft Desire”. They were invited to stare and smile, and they did it. But there was something remarkably offensive in their way of doing it, and perhaps if a few thick boots on the feet of rough but honest workmen had come into contact with their smooth personalities on their way out of Madame Modiste’s establishment, it might have done them good and taught them a useful lesson.’

Although not quite as colourful as Lucile’s names (what, indeed, could beat ‘The Red Mouth of a Venomous Flower?’), the monikers that Paquin bestowed upon her gowns show a wide range of sources of inspiration. Alongside traditionally feminine names such as ‘Yolande,’ ‘Rosemonde,’ and ‘Jane,’ and terms of endearment such as ‘Coucou’ and ‘Chère Coeur (dear heart),’ Paquin drew titles from French history such as ‘Marie Antoinette’ (1901 and 1902), ‘Robespierre’ (1898 and 1902), and ‘Pompadour’ (1902 and 1917).

One of the most interesting titles is that of ‘Zorab,’ bestowed upon a Winter 1902 day ensemble. Zorab, alternatively spelled Ziryab, was the nickname of Abu l-Hasan (c.789-857), an Iraqi intellectual of many talents, including music, poetry, and many academic disciplines who was active in Islamic Iberia. The choice of names such as this shows the breadth of Paquin’s erudition and cultural awareness. There is also a sense of assumption that her clients would be intelligent enough to pick up on the references and appreciate them accordingly.

Literature inspired ‘Werther’ for a 1899 pale blue walking costume, after Goethe’s famous 18th century tragedy ‘The Sorrows of Young Werther,’ whilst the performing arts provided ‘Coppélia’ (after the ballet) and ‘Traviata’ (after the opera), among others. Geography also supplied a number of names, with Paquin having a particular fondness for the names of French communes such as ‘Les Haies’ which was applied to one of her final designs, a pink dress from 1919.

After Paquin retired in 1920 and handed over to her assistant Madeleine Wallis, the tradition of naming designs came and went through the 1920s and 1930s. There was no significant change in the naming styles, apart from the introduction of interestingly English names, much as an English-speaking designer might use French phrases or words to make their own designs sound tres chic. It is fascinating to see which English words or phrases a French designer thought sounded exotic. ‘Tomorrow,’ and ‘Smart,’ among others, no doubt sounded just as glamorous as ‘Demain’ and ‘Chic’ would sound to an English speaker. I was charmed to find a white evening gown called ‘I love you,’ and smiled when I came across the raspberry pink ensemble called ‘Oh yes.’ Ah, oui!

Until Lou Claverie came along in 1949, there is little evidence that 1940s Paquin models were given individual names. When Claverie came onto the scene, he promptly started creating named outfits once again. His 1950 collection shows a number of witty, bilingual names, including a slinky sea-green mermaid gown christened ‘Sex Appeal’  (illustrated at the top of this post) and a little gold lamé cocktail number called ‘Gold Rush.’

Two of my favourite Claverie designs are ‘Au Son du Cor (The Sound of the Horn)’ and ‘Ou ne badine pas avec l’amour,’ loosely translating as “Does not trifle with love.” The first, a chic tailored suit with crimson jacket, white skirt, and jaunty bowler hat, is clearly influenced by traditional fox-hunting attire (not the most politically correct subject nowadays!). The other, a glamorous strapless evening gown wittily incorporating a man’s white collar, necktie, and red cummerbund, could easily be worn on the red carpet today.

Interesting article !
Just a note : Does not trifle with love –> “On ne badine pas avec l’amour” is the title of a french theater play written by Alfred de Musset and published in 1834 in La Revue des Deux Mondes. It was played for the first time on stage in 1861 at the Comédie Française.

Hi Maxime! That is really interesting to know – sounds like Paquin maintained the tradition of being quite an erudite and well-read label well into the 1950s. Thank you for taking the time to share your comment, it is very much appreciated.