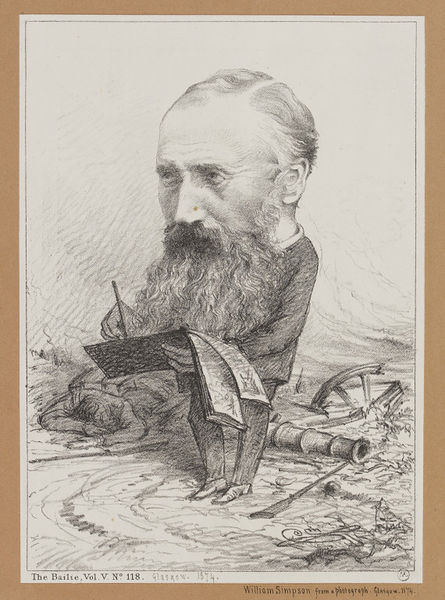 I have recently finished cataloguing an album of sketches from the Crimean War by the Scottish artist William Simpson. It is a fascinating volume, not only as an important resource from this period in history, but also for the picture it paints of Simpson himself as an artist and a collector.

William Simpson was born in Glasgow in 1823 and began his artistic career as an apprentice lithographer. He moved to London in 1851, where he continued to work as an artist for a number of publishing firms. In 1854, shortly after the outbreak of the Crimean War, he was commissioned to create a drawing of the city of Sebastopol under siege. However, he was unable to find any source material to work from, as no British artist had ever been to Sebastopol to sketch it first-hand. In his autobiography, Simpson speaks of his frustration at being unable to adequately portray scenes from the war:

“The news came of the troops making the trenches before Sebastopol. A siege in form was all so new after such a long peace, that everyone was excited and anxious about every detail. I read the papers carefully, and used to talk to Mr. Day about it, and say I wished I were there. “Here they are making ‘gabions’, ‘fascines’, ‘traverses’ &c. What are these? No one knows. If I were there I could send sketches of them, so that every one would understand.”

These comments were heard by the lithography firm Colnaghi and Co., who quickly approached Simpson and asked if he would like to make the trip. He accepted, and arrangements were made for him to accompany the British Army to Crimea. Simpson produced hundreds of first-hand sketches of the people and places he encountered on his travels, which he sent back to London using the military’s official postal service. Thus he became one of Britain’s very first war artists, earning himself the nickname ‘Crimean Simpson’ along the way.

Using his first-hand sketches as preparatory studies, Simpson later produced a series of colour prints depicting various scenes from the war, which were published in the Colnaghi portfolio The Seat of the War in the East. Many years later, Simpson gathered all of his original sketches into a scrapbook-style album, along with a collection of other materials amassed on his travels such as maps, newspaper cuttings, and around fifty photographs by the photographers James Robertson and Felice Beato. The entire album was purchased by the V&A from Simpson’s widow in 1900, shortly after his death.

The album is a fantastic resource for anyone with an interest in the Crimean War or early war correspondence. When I began cataloguing the volume, I was immediately struck by Simpson’s dedication to meticulously documenting the material he collected, and preserving it for future generations.

Simpson was not concerned with presenting pristine finished drawings or showing off his considerable artistic talent in this album. There are a few beautiful watercolours pasted in amongst the pencil sketches, but the majority of the volume is made up of rough drawings, clearly sketched very quickly and on-the-spot in the middle of the action. Many are jotted on tiny corners of scrap paper, or even on bits of newspaper. Simpson seems to have been reluctant to dispose of even the smallest shred of evidence which might someday be useful to someone studying the war.

Throughout the volume, Simpson displays a remarkable level of foresight in the way he presents the material, and an awareness of its potential importance to future generations. He often adds his own notes to the drawings, jotting down interesting anecdotes about the people and events being depicted.

As a cataloguer, it can sometimes be very difficult to determine exactly what is being depicted in works from so long ago, and I was therefore genuinely touched by Simpson’s thoughtful notes and annotations on his own sketches. I felt as if he could imagine someone like me examining his album over a hundred years later, and wanted to make sure I had all the information I might need.

A particularly noteworthy example is this rather tatty-looking set of pencil scribbles, which at first glance might look like complete nonsense. However, thanks to Simpson’s neat note in the corner, we know that this actually the handiwork of Lord George Paget, and that the scribbles represent a plan of the infamous Charge of the Light Brigade. This diagram was drawn by Paget as he recounted the events to Simpson, some nine months later.

All of the sketches, photographs and other materials from the Crimea album can be found on the V&A’s Search the Collections page. Or, if you’d like to come and see the sketches in person, you can make an appointment to do so in our Prints and Drawings study room.

13 comments so far, view or add yours

Fascinating read and well written too!

I agree, it was very informative and made me keen to learn more!

I am William Simpson’s great grandson and have a strong interest in his life and times. I have inherited a lot of his memorabilia, but was not previously aware of this collection. Very interesting.

Thank you for your comment, Adrian! It is fantastic to hear from one of Mr. Simpson’s relatives, and I am very pleased to hear that you found the post interesting.

We have quite a few other works by William Simpson in our collection. If you follow this link you will be able to see them all on our Search the Collections page.

I am currently in the process of cataloguing another of his volumes containing sketches of India, and I look forward to bringing you another blog post about that in the near future!

Good to see this Alex. My book on Simpson in Afghanistan, 1878-79 has just been published by Helion

This is based on his album of sketches and water-colours which we own as well as the corresponding one in the V&A which deals with the Buddhist remains in Afghanistan. The text is a transcription of Simpson’s diary which we acquired from Adrian a number of years ago, along with an extensive introduction written by me, and several appendices including a full list of the images in the V&A album.

Incidentally, I should add that I wrote a short article about our Simpson Crimean sketchbooks and those at Yale a number of years ago:

Also a blog on our Simpson watercolors from the Abyssinian Campaign:
http://blogs.brown.edu/askb/2014/02/05/william-simpson-in-abyssinia/

Thank you for getting in touch, Peter, and for letting me know about your new book on Simpson in Afghanistan. It sounds fascinating! Although most of my cataloguing work so far has focused on Simpson’s Crimean album, I did come across some of his archaeological drawings from the Jalalabad Valley in our collection a few months ago. The catalogue entries for those are here on our Search the Collections page, and I hope to have photographs of them soon. Simpson clearly had a very exciting and varied career, and it’s great to see such an interest being taken in his work.

Many thanks for making William Simpson’s sketches of the Crimean War accessible in the internet. He was a very interested and knowledgeable man concerning Buddhist art and British warfare in the East.

One of our projects is the website http://www.phototheca-afghanica.ch, providing free access to about 5.000 historic images and photographs on Afghanistan.

Two of the series of photographs concern the 2nd Anglo-Afghan War of 1878-79 and the Afghan Boundary Commission of 1884-87. In both events William Simpson participated as ‘Special Artist to the Illustrated London News’.

It is interesting to compare his original sketches and captions with the engravings published in the ILN, as well as with photographs, taken at the same places.

I look forward to see his archaeological sketches from the Jalalabad area on your website soon. This will provide an excellent addition to the recent publication by Peter Harrington. It would be great, if the V&A could produce one day similar documentations on its Simpson albums.

Thank you for your comment, Paul. I am glad to hear you found the sketches useful. Simpson was certainly a very well-travelled man, and I have been fascinated to see how much his work seems to have taken him all over the word.

The drawings from Jalalabad are being photographed at the moment, and the images should appear on our Search the Collections page in around a month’s time. Please do let me know if there’s anything else I can help you with.

Dear Alexandra,
Many thanks for this catalogue- I looked at the online sketches with great interest. I am trying to find a copy of preparatory sketches for Simpson’s watercolour “The Night of Balaclava” showing a sleeping Lord Cardigan and the two Maxse brothers by a campfire after the Charge of the Light Brigade. A black and white copy was published in Baring Pemberton “Battles of the Crimean War” (Macmillan and Pan 1968) and if I have understood correctly in the property of the Maxse family. Very grateful for your help here.
Kind regards
Paul Browne

William Simpson is my Great Grandfather, so I was very interested to read about your cataloguing of his album of sketches from the Crimean War. He was very good at writing descriptions on his sketches. I have a small sketchbook of his (about 9 X 6 inches).It is titled 3 India, Parungilaw, Thibet, Cashmere, Madras, Gairuppa 1861. He started his sketches on 4th July 1861. Don’t know if you would be interested in looking at it ? It is mostly sketches, but has a few pretty water colours . Let me know if it would be of interest and maybe we could arrange a meeting.

Hi, very interesting to read. William Simpson was my grans grandfather. She is Agnes Simpson.