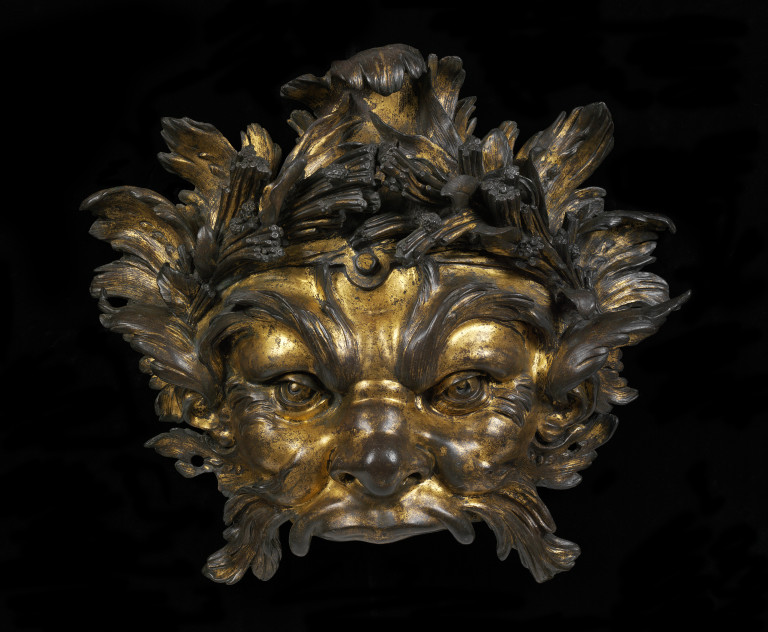 When visiting the Metalwork Conservation studios the other week I came across this familiar face in the midst of treatment. It is a gilt-bronze ‘mask’ which will feature in our display about the influence of Louis XIV’s court on European art and design.

Referring to it just as a mask is perhaps slightly misleading as, measuring 51 x 57 cm, it is much too large and heavy for a person to actually wear. It is instead a sculptural piece that was probably intended to function as decoration for a fountain. There is no lower jaw, which suggests that it may have been designed to have a water spout coming out from its ‘mouth’. The hole you can see below the mask’s right ear may have been used to fix it to the fountain.

This ‘mask’ is one of a pair in the Museum’s collection, each depicting a face with strikingly illustrious eyebrows and facial hair that appears to be made from acanthus leaves. The head is garlanded with reeds and a band with a flat boss in the centre crosses the brow.

Behind the lip of this mask (A.1-1973) are two parallel incisions, which could be to indicate that it is ‘2’ of a series. Its pair (A.2-1973) has a single incision, suggesting that it is ‘1’. Unfortunately nothing is known of their provenance and so we don’t know how many others may have made up the series.

The ‘mask’ is characteristic of decorative sculpture produced under Louis XIV for the gardens at Versailles and other royal châteaux. In the last quarter of the 17th century and the early years of the 18th, an enormous quantity of high quality, decorative bronze sculpture was created for the many projects undertaken by the Royal Building Department (Direction generale des Batiments du Roi). It is not possible to attribute the design of masks/faces of this kind to a particular sculptor. However, a number of designs for grotesque faces with similar design features can be found, such as these metalwork designs from the V&A collection shown below.

I particularly enjoy the way our ‘mask’ appears simultaneously humorous, friendly and disturbingly grotesque. This is a common feature of ‘mascarons’ – architectural ornaments depicting a face, whose function was originally to scare evil spirits and prevent them from entering a building. The term mascaron came into use during the 17th century. It comes from the Italian ‘mascharone,’ which in turn derives from the Arab word ‘mascara’ meaning buffoonery.

Mascarons were particularly popular in 15th century Italy and when Italian Renaissance style became fashionable in 16th century France, mascarons began to multiply, particularly in Paris. Throughout the 17th century a distinction was made between masks and mascarons. Writing in 1691 architect Augustin-Charles d’Aviler described a mask as a human face that was traditionally sculpted in the keystone over a door or window opening. The images might represent the gods, the seasons, the continents or more esoteric ideas such as the ages or human temperaments. In contrast, a mascaron was a grotesque image, a representation of something or someone unreal, and was used on doors, grottoes and fountains. Using these guidelines, our ‘mask’ is in fact a ‘mascaron’.

A later example of the continuing vogue for mascarons can be found on the monumental public fountain Fontaine des Quatre-Saisons (Fountain of the Four Seasons), executed by Louis XV’s royal sculptor Edme Bouchardon and erected in Paris in 1745. The large fountain is richly decorated but features only two water spouts for filling vessels with water – both created as mascarons.

The mascarons on this late 19th century monument in Montreal (below) have also caught my eye. The Maisonneuve Monument in Place d’Armes, created by sculptor Louis-Philippe Hébert, is dedicated to Paul Chomedey de Maisonneuve (the founder of Montreal) and was unveiled in 1895. I think that the mischievous look on the first mascaron’s face somewhat echoes that of our ‘mask’.

With its garland of reeds and surrounding acanthus leaves, our face also calls to mind two other common decorative figures; those of Bacchus (Dionysus, god of wine-making and ritual ecstasy in Greek mythology) and the widely found ‘foliage face’ of the Green Man (most often a symbol of growth and rebirth).

You’ll be able to examine his smiling/scowling/smirking/sneering face for yourself once the galleries open.