In November we installed a new acquisition in the British Galleries, Antonio Zucchi’s magnificent portrait of the 18th-century architect James Adam. This is the only known portrait by the artist who worked primarily as an architectural draughtsman and decorative painter to James and his older brother Robert.

The painting has been jointly acquired by the V&A and the National Galleries of Scotland with generous support from the Art Fund and V&A members. It will be displayed alternately in Edinburgh and London, remaining in gallery 118 until November 2020. Installed above a chimneypiece designed by Sir William Chambers (1723 – 96) and carved by Joseph Wilton (1722 – 1803), its position within the British Galleries allows us to present the portrait alongside the work of his contemporaries and highlight Adam’s significant contribution to the development of art and design in England.

James Adam was the youngest of a dynasty of Scottish architects who developed a new style of architectural Neoclassicism. In this portrait, he poses confidently in a fabulous fur-lined coat, holding a rolled-up sheet of paper in his left hand and a compass in his right. He stands between a copy of the Medici Vase and a bronzed wax model for his new ‘British’ architectural order for the Houses of Parliament. Behind him are panels of grotesque ornament of a kind produced by the Adam firm, framing a niche containing a sculpture of Minerva. All of these elements work together to assert and celebrate Adam’s invention and skill as one of the leading architects of his age.

For many years, the portrait was thought to be by the renowned portrait painter Pompeo Batoni (1708–1787) who was based in Rome and executed lavish portraits of travellers on the Grand Tour including, for example, Edward Howard, on display in the same gallery at the V&A. Only recently was Zucchi’s signature discovered during a campaign of restoration, revealing a new aspect of his work that was little-known until now.

The precise circumstances of the portrait commission are unknown but it is unlikely that Adam would have brought it back to the family’s office in London, as it would have far outshone the more modest portrait of his older brother Robert by George Willison (National Portrait Gallery). It has been suggested that Adam posed for his friend Zucchi to help him win commissions from visitors to Rome who may have seen the portrait in his studio.

An object of this size and weight takes a considerable effort to install. Several technicians erected scaffolding in the gallery before using specialist equipment to lift the painting on to the scaffolding and carefully fix it to the wall. 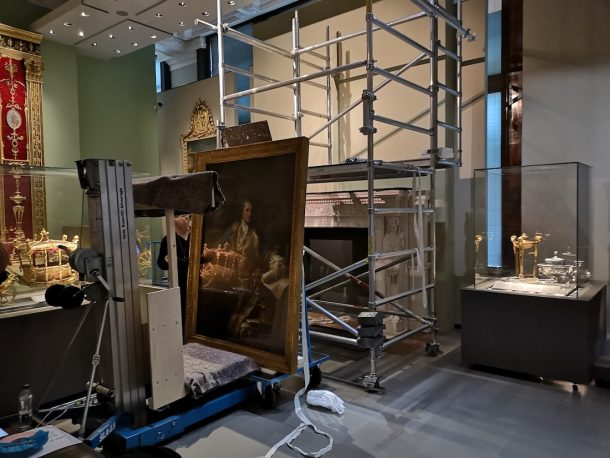 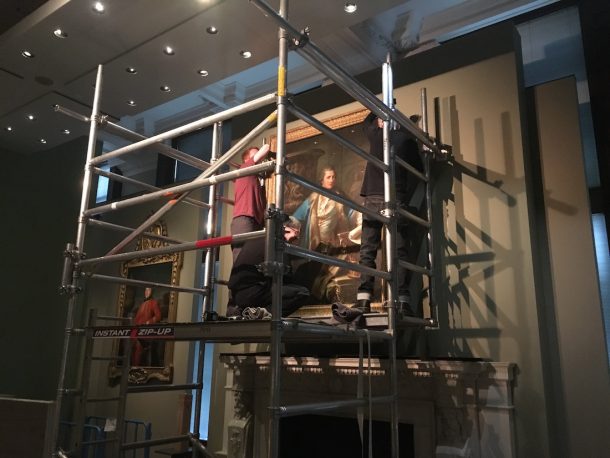 Finally, we adjusted the lighting to make sure that the portrait can dazzle just in the way Zucchi intended. 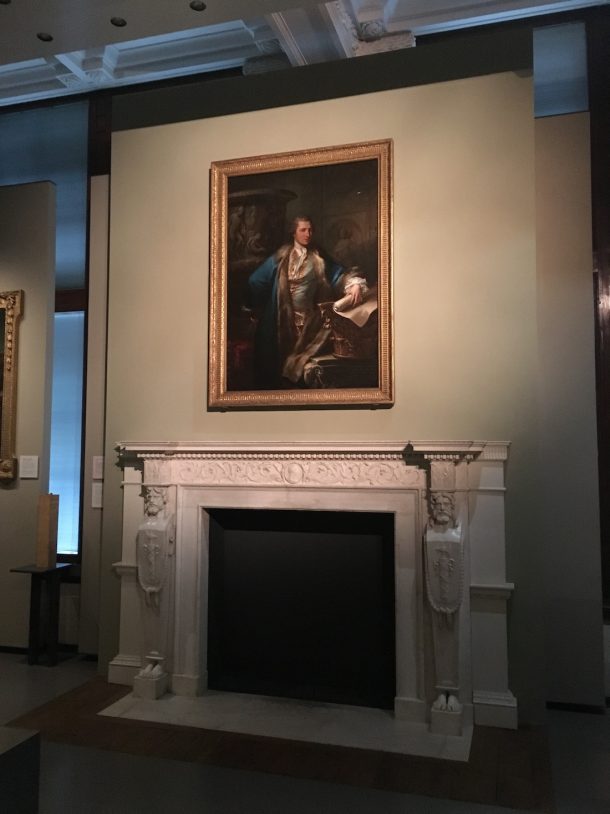 You can find Antonio Zucchi’s portrait of James Adam in Room 118 on the third floor of the V&A in the British Galleries. The painting will remain on display for a year before returning to Edinburgh. After this, it will be shown at each institution for a period of seven years on rotation.