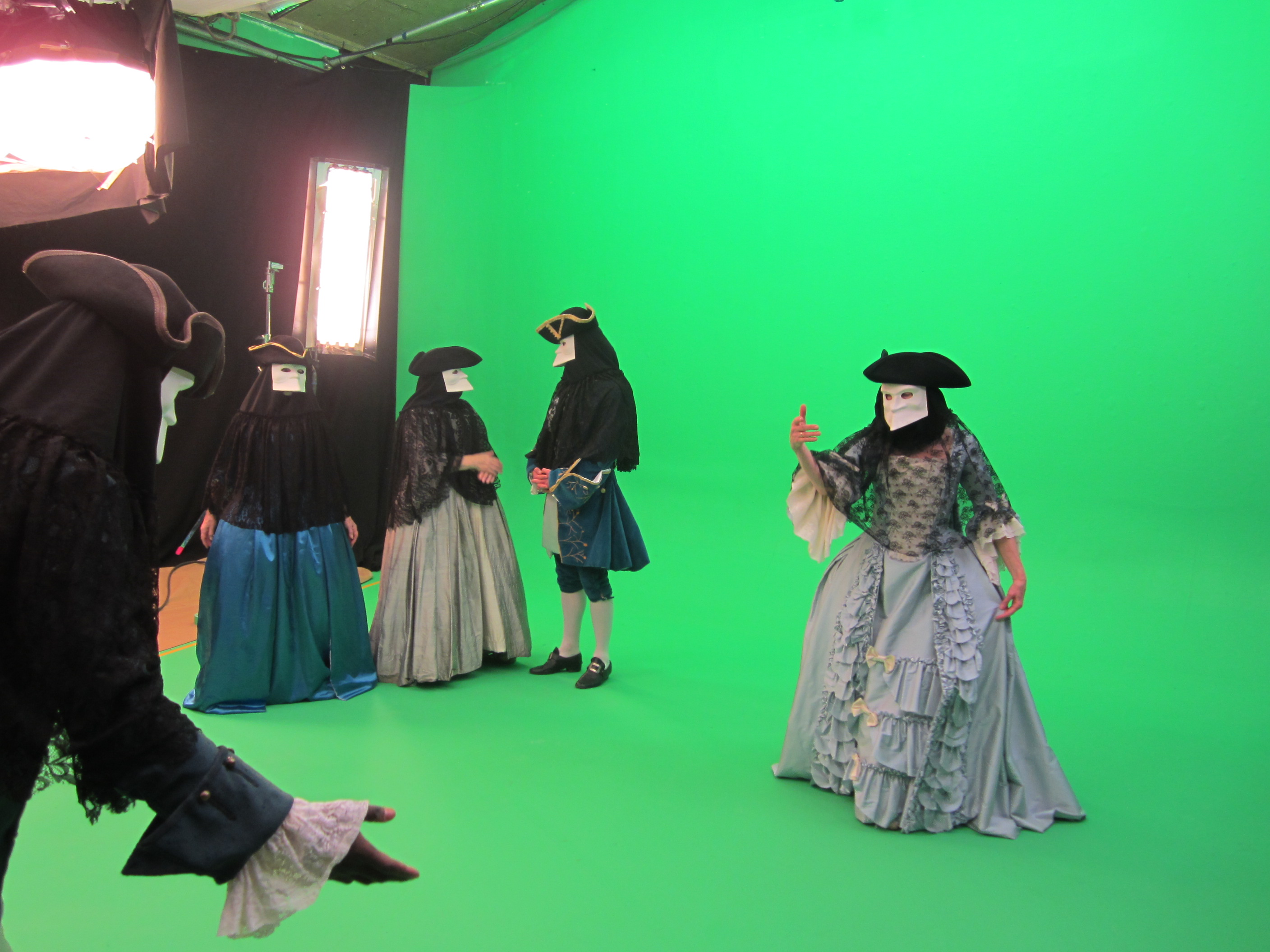 This film takes you behind-the-scenes of The Masquerade interactive film, and the extraordinary group of people that helped create it. Interviews with the participants, the theatre company and V&A staff involved, provide insights into this unique collaboration. We documented the project from the first meeting of the cast to the launch party.

The Masquerade is part of the Europe 1600–1815 galleries and offers a new experience at the V&A. It’s a participatory film with a story taking you from a ball room, through a gambling hall to a piazza of 18th-century Venice. Harlequin is your guide, and you’ll need to mirror his mimes to reach the next part of the tale. He’ll introduce you to a Venetian world full of mystery.

The re-development of the Europe 1600–1815 galleries gave the Interpretation team and Project Curators a chance to completely re-think how we engaged our audiences with the objects and stories from the V&A collections. We wanted to give visitors the opportunity to experience the music, fashion and dance of the 18th century, and learn about social etiquette of the period. One of the most popular ways for visitors to ‘step back in time’ is to try on period costume. There are other opportunities to do this at the V&A, within the Medieval and Renaissance, and Britain galleries. However, fashions of the 18th century were particularly elaborate, and would be difficult and expensive to authentically recreate for visitors to use. We decided that we needed a fresh approach. An exploration of digital technologies revealed potential to demonstrate how clothing looked, moved and sounded, within the context of a lively social scene.

The setting of 18th-century Venetian Carnival was the perfect way to explore these themes. The team undertook in-depth research, even travelling to Venice during Carnival to experience the atmosphere, and to visit historical interiors for inspiration. The V&A has fantastic objects depicting commedia dell’arte (improvised comic theatre originating in Italy), so we wanted to include aspects of this performative art form within The Masquerade. We detailed our complex wish-list of historical themes and playful participation in a brief, seeking a creative solution using digital media.

The team chose an exciting collaborative proposal submitted by Clay Interactive, a creative agency based in East London, and Slung Low, a theatre company based in Leeds. Clay delivered the digital media, creating an experience that used body-recognition software to enable visitors to ‘step into’ the film. Slung Low worked with the V&A to create the narrative of the film. They led performance workshops and directed the final piece.

A break-through that resulted from this creative partnership was the introduction of Harlequin. This character could provide a thread throughout the different scenes and lead the visitor interaction. The idea developed for Harlequin to appear at junctures within the narrative of the film and demonstrate an action, such as taking a bow – the visitor then needed to copy the action, in order to push the story forward. Body-recognition technology would be used to read the visitor’s response to Harlequin’s movement.

To bring the setting of 18th-century Venice to life, the V&A recruited a cast of 40 volunteers from three community groups: Synergy Theatre Project supports the rehabilitation of prisoners, and young people at risk of offending, through theatre; New Horizons is an activity centre offering an extensive programme to those aged 50 and over; Katherine Low Settlement is a charity tackling poverty in the communities of Wandsworth. These groups formed new relationships with the V&A and with each other.

Our cast members ranged in age from 17-94 and brought a variety of interests and skills to the artistic process. They were deeply committed to the project, enthusiastically learning how to dance a minuet, and wear the masks and elaborate fashions of 18th-century Venice. We held a series of workshops to develop the narrative, cast roles and rehearse the scenes. The participants and Slung Low worked extremely hard in these sessions which were good fun, and sometimes challenging. Huge amounts of biscuits were eaten to get everyone through! You can hear the experiences of some of the cast members in The Making of the Masquerade film posted above.

Filming of the final piece took place at a professional film studio, using green screen. This production technique of filming in front of uniform colour means that separately created backgrounds can be added later. We decided to use drawn backdrops to give the film a theatrical look.

Once Clay had added the backgrounds and music, and edited the film, we needed to test The Masquerade with the public. We rigged up a prototype at the V&A, with an open call for visitors to try it out. Through observation and interviews we gathered feedback on the interactive experience, and the clarity of the narrative. This proved invaluable in helping us develop an activity which was intuitive to use and fun to experience. For example we changed the graphics that indicated how accurately the visitor is copying Harlequin’s movements – from a mannequin to a progress bar.  We also added short texts to strengthen the storyline.

Following installation of the final interactive, the body-tracking software required training to recognise a range of physiques. A further session of testing was undertaken, including children and adults. Tweaking the settings ensured that all shapes and sizes could interact with the action.

Since the opening of the Europe 1600–1815 galleries in December 2015 it has been so rewarding to see visitors’ surprise and delight when interacting with The Masquerade. Passers-by catching the action seem to enjoy it almost as much as people who choose to take part.

We held a launch party for the community group cast members to see their finished work in the gallery. It was wonderful to see the team again, and celebrate their achievement. They reminisced about getting to grips with dancing in the full formal attire, and the joys of having their hair and make-up historically restyled. Many proudly spoke of returning with families and friends, to reveal the outcome of the project.

You can see the cast members’ reactions to the finished interactive in the The Making of the Masquerade posted above.

Come along to Room 2a of the Europe 1600–1815 galleries and join The Masquerade.