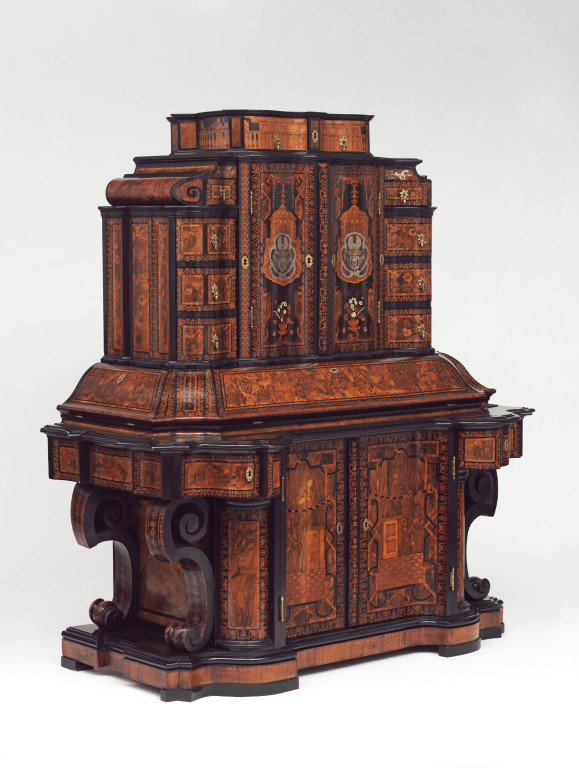 Large writing cabinets, such as the impressive example below, were often important indicators of a gentleman’s status in the 18th century. This cabinet is a fine example of the best craftsmanship of the period and its large size and intricate detailing indicates the importance of the person for whom it was made. It also held within it a secret that remained hidden for over 250 years …

The cabinet was made for Johannes Gallus Jacob (1670-1736 or 1737), whose cypher and arms are incorporated into the marquetry. He was the all-powerful finance minister (Hofkammerdirektor) of the Prince Bishop of Würzburg Johann Philipp von Greiffenclau (1699-1719) and made a fortune by supplying war materials.

We can often learn a lot about the high-status owners of such impressive cabinets, but it is much more difficult to learn anything about the people who actually made them. However, in this case we know that it was made in the workshop of Servatius Arend, the court cabinet-maker in Würzburg, and that the work was undertaken by his brother, Jacob Arend of Koblenz, and Johannes Witthalm of Vienna in 1716.

We do not know the full history of the cabinet but it was bought, in England, by John Gibbon in 1843 for £160. It then remained within the Gibbon family before coming to the Museum in 1975.

It was on Boxing Day in 1967 that a wonderful discovery was made about the construction of the cabinet. Two young boys of the Gibbon family (Michael Boughey, nephew of Mrs Gibbons and her son Benjamin) were searching for secret drawers in the cabinet and asked to remove some elements that had been glued in place. They then uncovered a hidden letter written by Jacob Arend in 1716.

The paper, signed by Jacob Arend and Johannes Wittalm, is dated 22 October 1716. Its content means that we are lucky enough to not only know who made the cabinet but also be given an insight into the conditions they were working in. The particularly harsh winters and subsequent crop failures of recent years had made conditions particularly difficulty for working people in Würzburg and the letter records that Jacob and Johannes were much concerned with the hardship of their lives at the time of making the cabinet.

A translation of the letter reads as follows:

‘This cabinet was made by Jacob Arend of Koblenz and Johannes Witthalm of Vienna, who are at present journeyman cabinet-makers in the service of Master Servacius Arend, court cabinet-maker in Würzburg. It was made in the year 1716, when cabbage and peas were often the best food we could obtain. As a result we have grown so fat that we can hardly climb the stairs any more, but meat has been in very short supply for us, God pity us. There was seldom warm bread in our kitchen, but the wine has always tasted good; when we have earned one week’s wages, two have already been drunk, for wine has become dear this year with the vintage having been poor these last four years. This year there has also been a great war in Hungary against the Turks*.’

On the back of the sheet is written:

‘I, Jacob Arend, invented this cabinet in my own mind and have drafted it all and marked it out. I have cut it [the marquetry] with a fret- saw and shaded it. This was done in the Sander quarter, near the Korn Gasse by the river Main. But neither of us will be staying here much longer. This cabinet has been completed in the winter month [s], and we would like to go elsewhere, for little meat and a great deal of cabbage and turnips have driven us out of Würzburg. We ask him who finds this note to drink to our health and if we are no longer living then, may God grant us eternal rest and salvation. This 22nd day of October in the year 1716.’

To find out more about this intriguing cabinet and what we can learn from Jacob’s letter, I recommend taking a look at two excellent articles featured in the Summer 2014 V&A Online Journal:

‘The Cabinet with the letter: Luxury and Poverty in 18th-century Würzburg’

‘The Letter in the Writing Cabinet: The Emotional Life of an 18th-century Journeyman’