Looking at the V&A blog page this morning, I can see that Halloween has caught the imagination of a number of fellow Museum bloggers. However, I can’t pass up such an apt occasion on which to introduce you to two of the most gruesome and macabre objects going into the Europe Galleries. Both, fittingly, will feature in our display on Death.

First off, to strike fear into your heart we have this late 17th century wax relief, introducing us to the horror of hell. The ‘damned soul’ it depicts is being licked not only by the flames of hell but also the protruding tongues of two devils either side of him.

The relief was modelled in coloured wax, which is set on a red glass ground with sloping side pieces of mirror glass – the ‘flames of hell’ are made of splinters of mica (a silicate mineral). The wooden frame it is in measures just 11.5 x 10 cm.

It clearly demonstrates how the tactile possibilities of wax lend themselves to intricate, small-scale workmanship. Enhanced with delicate texturing and colouring, wax can vividly (and perhaps rather unnervingly), accurately mimic flesh – ideal for creating such morbidly realistic scenes.

Our suffering soul is captured in the midst of a dramatically, desperate and despairing scream. The realistic rendering of his flesh, with protruding veins and bulging eyes really accentuate the idea of hell as a place of both horrific emotional and physical suffering.

The wax is one of a pair (the other shows a ‘Blessed Soul’), which may have been part of a larger group. Similar objects in the collection also represent souls at the point of death, in Purgatory, Paradise and Hell. These highly realistic and dramatic wax tableaux served as memento mori, intended to inspire thoughts on mortality. 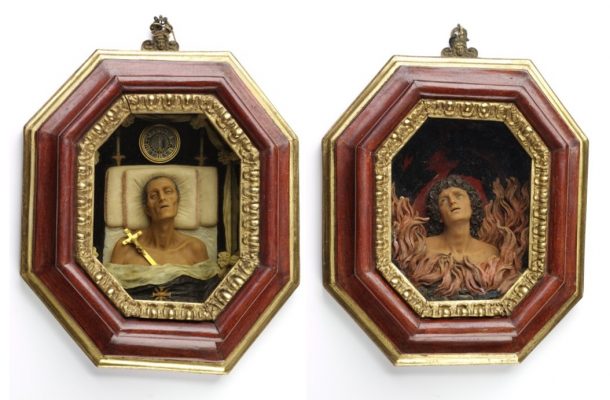 Our ‘damned soul’ wax is in the style of Gaetano Giulio Zumbo or Zummo (1656-1701), who was known for the expressiveness of his work. Born in Syracuse to an impoverished aristocratic Sicilian family, the early life and training of Zumbo is shrouded in mystery. He spent time in Rome, Naples and Bologna, where his presence among circles of anatomists is recorded. In Bologna, he is thought to have been the first to propose using coloured wax for anatomical teaching models.

From 1691 to 1695, Zumbo served Grand Duke Cosimo III and created his most famous teatrini (‘little theatres’), many of which were highly realistic wax tableaux. A number of Zumbo’s pieces, including one made for Cosimo, are displayed at the La Specola Museum of Natural History, Florence.

This nicely brings us to my second ‘Halloween highlight’, another dramatic wax tableau memento mori, from the early 18th century.

This work is on a much greater scale than the previous wax – the box frame that holds the scene measures approximately 83 x 108 x 20 cm. However, the wax has been worked in a similarly intricate and meticulous manner, creating a macabre scene packed full of tactile detail.

The scene is set in a crumbling graveyard, with the winged figure of Father Time seated on the left pointing to a clock. On the extreme right, the skeletal figure of Death looks on, wearing a crown and holding a spear.

The theatricality and general unnerving atmosphere of the scene is enhanced by the attention given to its setting – the ground slopes forward as if confronting the viewer; the painted background depicts decaying funerary monuments; and ivy creeps and trails around the stonework.

Until recently this wax was attributed to Zumbo but it has now been convincingly reassigned to Caterina de Julianis, a Neapolitan nun who specialized in wax modelling. A closely similar composition known to be by Caterina de Julianis is in the Chiesa dell’Immacolata in Catanzaro, previously in Bishop Emmanuel Spinelli’s palace, and dates from before 1727.

The piece was definitely inspired by Zumbo’s work though and a similar piece by Zumbo entitled ‘The Triumph of Time’ is in the La Specola Museum of Natural History, Florence. Together with ‘The Plague’ and ‘The Corruption of Bodies’ this work is one of Zumbo’s ‘Plague Waxes’.

Wax figures could be formed from moulds, as well as modelled, and so copies and variations of compositions were easily made.

The eagle-eyed among you may have noted that one of the differences between our tableau and the one by Zumbo at La Specola is the figure of the outstretched dead youth – Zumbo’s was female but ours is male. This transformation of gender is likely due to the fact that our tableau was originally made for the church of S. Severo al Pendino in Naples and a partially clothed man would have been more acceptable.