While looking at our trade literature for the V&A’s Car themed Friday Late last year, I located a fascinating, heavily illustrated volume focused on the history and development of all things automobile, as the ground stood at the end of the 19th century. The Parisian publication entitled ‘La voiture de demain: histoire de l’automobilisme (passe, present, technique, caricatures)‘ from 1898 contains many lively cartoons and I thought it worth sharing as a small taste of material relating to one of the V&A’s recent exhibition Cars: Accelerating the Modern World.

The cartoons are taken from publications worldwide and encompass, as you can see from the title, visions of the past, present and future. Most touchingly perhaps, there are several explorations of the  imagined effects of the introduction of not just motorcars but trams and the railway on the horses of the world! Horse-drawn trams had been an important leap forward at the beginning of the 19th century, the metal wheels on iron/steel rails allowing the animals to easier pull a greater load and provide a smoother ride. The first electric tramway came into operation in 1881 in Germany. 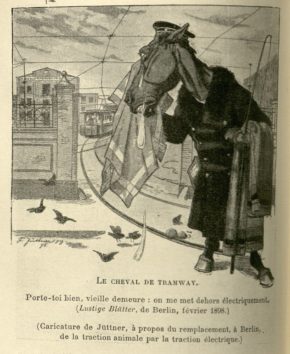 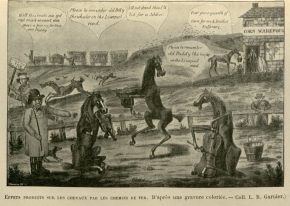 Unfortunately, for horses, the amount of upkeep they require outstripped their employers’ attachment to them –  perhaps above all the colossal amounts of manure they produced, and for which the US streetcar companies, for one, were charged. Their daily requirements of food, shelter and grooming were also slightly more demanding than the requirements of steam and electricity, once the infrastructure had been put into place. To get a taste of this bygone mode of transport, see the Isle of Man’s Douglas Bay Horse Tramway along the seafront promenade. The initial service opened back in 1876 and developed from this point. Since then it’s operated every year, put on hold only during WWII.

The Lyon tram network was electrified between 1893 and 1899, having developed from 1879 with first horse-drawn trams, and then steam-driven. Of course, new technology brought with it its own problems and the effects of the sheer number of modes of transport now available are depicted in the French cartoon below. There was a wave of very real accidents that took place in 1898 during the introduction of the new electric tramway. 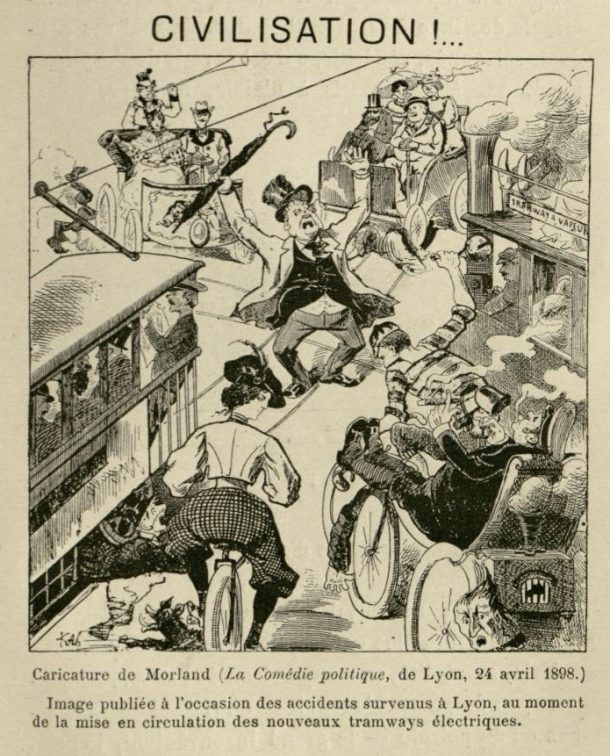 In terms of more fantastical design, however, we can view this – of its time – ‘Car for Blonde’. Its imagined lavish peacock-tailed hood perhaps making a comment on the lack of customisation available as car manufacturers moved steadily towards the financial benefits of more standardised models. 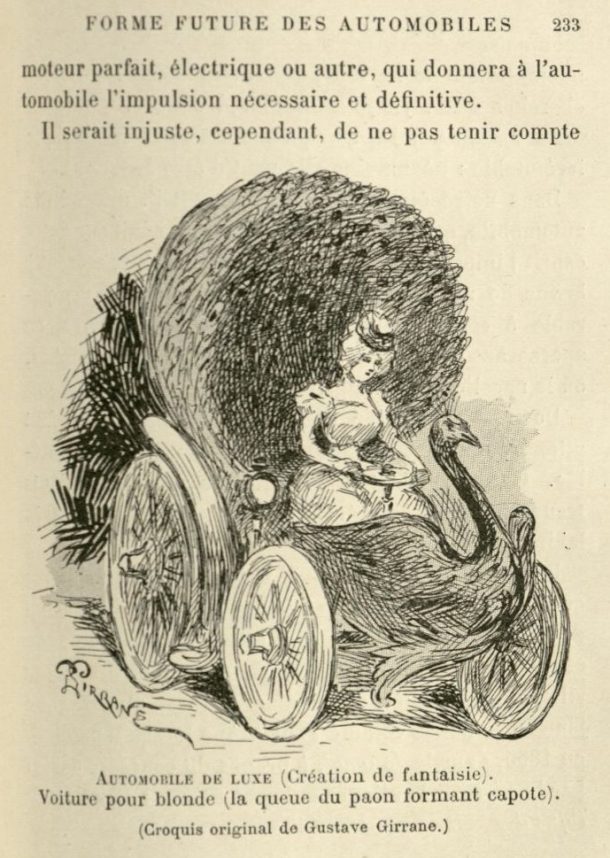 A whimsical cartoon shows an alternative, to rival the competition of other personal modes of transport like the bicycle or first motorcars, at the end of the 19th century – an electric scooter. The publication was to comment that even though it would be a mode of transport everyone could easily enjoy, in reach of ‘all’ budgets, the result would be ‘no more pedestrians’ (presumably they would now fear for their lives on the pavements!). Kick scooters really came into their own from the 1920s when they became a popular play item for children in urban areas of Europe.

This title features in a reading list put together on the theme of the advertising of cars. When we’re all back up and running, these books, can be requested from the National Art Library after becoming a member. We’d love to see you in our reading rooms on level 2 of the V&A. In the meantime, the reduced traffic noise is one small plus in what is a very challenging period for all of us. All good wishes from the National Art Library.