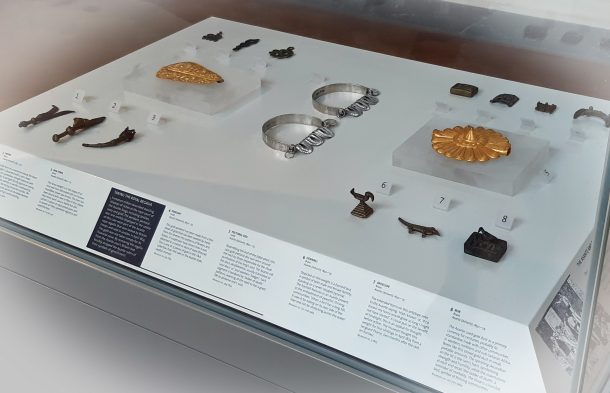 This week we installed a new, small display of Asante Goldweights in the Metalware Gallery (Room 116: a bridge gallery off the Ironwork Galleries). It shows small copper-alloy weights formerly used in the gold trade in Asante communities in what is now Ghana, West Africa. These weights are heavy with symbolism. Their designs carry mottoes championing honesty in trade and warnings about the watchful eyes of government. Accompanying them are several gold and silver items from the Asante court regalia. Together they attest to the importance of gold to the Asante economy. The V&A’s Metalwork collection contains only a small number of objects from sub-Saharan Africa.  ‘Why is the Asante court regalia in the museum’s collection?’ you may wonder.

On 4 February 1874, following Asante efforts to protect the gold- and former slave-trading port of Elmina, British forces under the command of Major-General Sir Garnet Wolseley, launched a ‘punitive raid’ on the Asante state capital, Kumasi. Faced with unfavourable terms and overwhelming odds, the Asante king (Asantehene), Kofi Karikari, fled. To suppress any resurgence of Asante authority, Wolseley ordered troops to plunder the royal regalia and destroy the town. The gold was not taken simply for its financial value. By removing the regalia from the Asante court, Britain had stripped the Asante rulers of their symbols of government and denied them their authority to govern.

British newspapers clamoured to report the raid and Wolseley was welcomed back to Britain as a conquering hero. So ruthlessly efficient was Wolseley that, in Britain, the phrase, ‘Everything is all Sir Garnet’ entered the popular lexicon and, five years later, he was cited as the soldier lampooned in Gilbert and Sullivan’s The Pirates of Penzance  as ‘the very model of a modern Major-General’.

The gold regalia was sold at auction where the V&A bought 13 items including the gold disk, silver anklets and gold pendant shown in the display. The museum, founded as an art school, selected each for its ornament which might be instructive for artists and product designers.

Other parts of the regalia entered the Royal Collection and the British Museum, and electrotype reproductions of them were circulated among art schools in the country. The exhibition of A Collection of Gold and Other Objects from Ashanti at the South Kensington Museum (later the V&A) in 1874 attracted large crowds who viewed it in with a mixture of triumphant imperialism combined with artistic curiosity.

Asante Goldweights is a redisplay of objects shown in the same display case in 2007 to mark both the bicentenary of the Parliamentary abolition of the slave trade and 50 years of Ghanaian independence. Twelve years later, the language in the redisplay that explains the ownership history of this material has been strengthened. It reflects the developing discussions in museums around decolonisation and the need for us to be open about the V&A’s history as both an expression and a driver of 19th-century imperialism.

The museum has benefitted greatly from the advice on content and language from Professor Olivette Otele, Professor of History at Bath Spa University and Vice-President of the Royal Historical Society, S.I. Martin, independent historian and author of Britain and the Slave Trade (1999), and Dr. Peter Adjaye (AJ Kwame), artist and musician. Their input was enabled by Janet Browne in V&A Learning, who has also given much advice and support on content and texts.

Asante Goldweights will be on show in the Metalware Gallery for the foreseeable future. To find out more about the Asante gold and goldweights in the V&A’s collection, see here.

When a shield wears out, the framework still remains. (What we do now will leave a legacy.) – Asante proverb

Is the Asanti Goldweights exhibition still on view at the V and A?