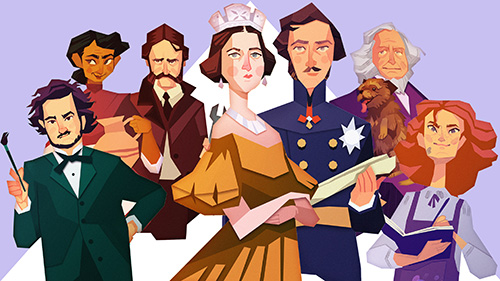 This is a glimpse into the design process behind Secret Seekers, the V&A’s new game for families, starting with a three day onsite ‘Creative Sprint’ at the V&A and ending at the glamorous launch of the new Exhibition Road Quarter on a balmy June evening.

A great game starts with a great brief and the V&A team delivered, not just in terms of overarching vision, but also detail; the briefing doc was packed with audience insight, background research and sample content, all pointing at towards one strategic aim: create a social game or families that tells the story of the building.

Playing devil’s advocate, Lead Designer David Arnold said: “What kid is going to look at some bricks and think ‘Wow!’?” It wasn’t long before our opinion changed. Arnold continues: “Resident historian – and all round legend – Christopher took us on a tour. We were blown away by the stories he told us.”

Over three jam-packed creative days, we set about combining the strands of our creative ambition into a coherent whole. We looked through a range of inspirational site-specific games – from Preloaded’s own Rugged Rovers and Adventure Cards through to Disney’s Magic Band and HRP’s Time Explorers – and the V&A team were quick off the mark with a classic client request: we want all the best bits of those games, but in one game, please.

Designing by committee can be risky, but armed with some nifty paper prototypes and facing one ultimate arbiter – the target audience – we got crucial early feedback and the all-important team buy-in to an overarching concept. “As a designer I had some anxiety about this process,” admits Arnold. “Guaranteeing a decent outcome after only a few days is daunting, especially with the risk of ‘too many cooks’. But Ben chaired the workshop and kept us focussed.” After three intense days of post-its, dodgy sketches and sellotape, we arrived at the (startlingly obvious, in hindsight) eureka moment: the characters at the heart of the building’s story should also be at the heart of the game experience.

We usually express a game concept to the wider team in the form of a Game Design Document. However, designing games for the sofa is one thing but designing a site-specific experience, with all the added distractions, is another thing entirely. We continued the iterative approach, using Marvel App to create a digital prototype. The following are some of the design challenges David and the team faced:

●    How to frame the choice of location and character? I.e. is the first question: where to play, or who to talk to?
●    How do we encourage looking and discussion?
●    How do we support wayfinding in a notoriously complex building?
●    What is the lowest-threshold way to handle answer input?
●    How do we reward players and expose progress?

The short answer to these challenges is: design, test, repeat! After the initial creative sprint, we conducted a content workshop, exploring the physical locations we wanted players to learn about and enjoy ‘playing’. As an example, David discusses the toughest location: “In the Cast Courts, my preference was for treasure hunt type challenges where the information was available in the environment, encouraging players to look up and engage with the space. However, for balance we also included some trivia questions for players to apply logical and lateral thinking.”

Challenges from each selected location were added to a basic CMS and then paired with the most appropriate character, helping players learn what to expect and each of them. Sticking to game convention, progress is expressed through a ‘Gem’ system, awarded per challenge completed. An on-site “blocking out”, or pacing between every game location, suggested it would take over three hours to finish. The Achievement system was designed to give completionists something to aim for – every character in every location – but also reward shorter engagement – all characters in one location.

The ‘test and repeat’ part of production occurred at Alpha and Beta milestones. “The Alpha test is always the most anxiety-ridden. You’ve got a bare bones game that isn’t ready to release, and you’re letting it loose on the public,” explains Arnold. Our goal was to prove out the core experience of interacting with characters at specific locations, and despite the low-fi look and feel, the concept was popular with all eight groups.

A stand-out moment from Beta testing, focussed on surface-level changes rather than the guts of the game, was observing a young girl complete a challenge, select a new location and stride off with parents in pursuit. Other ‘big kids’ (it was designed to be inter-generational after all) were also impressed, remarking how their children would usually get bored after 30 minutes but had been happily playing for over an hour.

V&A Secret Seekers was developed in record time, going from concept kick-off, via two full user testing sessions, to released product in only 14 weeks. There are always things we’d like to improve, but the same seems to be the case for the V&A itself, a set of buildings in constant Beta, changing with the times to fulfill Prince Albert’s vision of a cultural quarter for everyone.

Author: Ben Templeton is the Associate Creative Director at Preloaded and Product Owner for the Secret Seekers game.

Preloaded is a BAFTA-winning design studio creating games with purpose for arts and culture organisations around the world.

Well, that’s all you have described, good options!

Pretty cool game. Loved it. Thanks for sharing.