For four years, in the late 1980s, anti-apartheid protestors maintained a continuous protest outside the South African Embassy in London. South Africa House occupies the whole of the east side of Trafalgar Square. Its stonework exudes power and privilege. In contrast, the Non-Stop Picket for the release of Nelson Mandela appeared fragile and ephemeral. Materially, it consisted of little more than a hand-sewn banner held up on two lengths of sturdy doweling; and, it occupied only a few square metres of the pavement in front of the embassy’s gates. Although the protestors themselves were central to keeping the Picket going, non-stop, for 1408 days and nights, the objects they used tell a lot about the history of their protest. 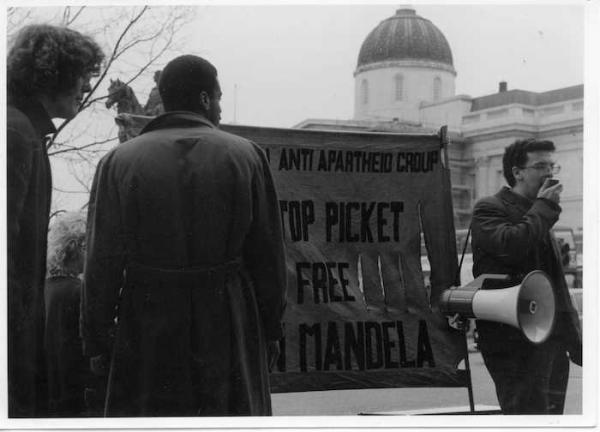 From its very beginning in April 1986, the form and presence of the Non-Stop Picket was contested by the Metropolitan Police, under pressure from the South African Embassy. In the early days, the police would not allow the protestors to place any of their belongings on the pavement. At all times, two picketers had to hold their banner in place. The few supplies that the protestors were allowed to keep ‘on site’ were stored under a tarpaulin beneath a nearby tree. Those supplies were mostly things that were integral to the their campaigning – boxes of fliers advertising their next large protest; copies of their petition; and, spare batteries for their megaphone. Practices relating to all of these objects were contested by the police in the first few months of the Picket. The picketers fought hard – on the streets and in the courts – to defend their right to protest on their own terms.

The Picket’s banner was useful in proclaiming its cause. It could arrest the attention of passing pedestrians just long enough for a picketer to engage them in conversation. Picketers often wore hand-drawn placards adorned with anti-apartheid slogans, or the names of political prisoners, on strings round their necks. These added to the visual impact of the protest. Whenever there were more than two people on the Picket, some protestors would form a line in front of the banner, distributing leaflets and soliciting signatures on the petition for the release of Mandela. The Picket always had a large stock of clipboards for this purpose. In fact, to most picketers, they became known as ‘petition boards’. With a petition pro forma clipped to it, the board could rest comfortably on the forearm and be presented, expectantly, to people passing by. Conversations initiated over a petition board were central to spreading news of the Non-Stop Picket, raising essential funds, and recruiting new people to its anti-apartheid cause. The act of petitioning brought conflict with the police who, in the name of preventing highway obstruction, tried to contain the picketers to the smallest possible space on the (very wide) pavement. They also used local bylaws against ‘illegal street trading’ to try and prevent the Picket from collecting donations.

The group’s megaphone was also a major source of conflict. The Non-Stop Picket had a distinct soundscape. Picketers taught each other and sang songs from the South African anti-apartheid struggle. Most picketers learnt the songs phonetically and the process involved a degree of trust to sing lyrics in languages (Zulu and Xhosa) that most could not understand. These songs could help re-energise the picket and cohere it as a collective when spirits were flagging. In addition to singing these ‘freedom songs’, picketers chanted and used the megaphone to amplify their chanting. This always served more than one end – it was another way of publicising the protest; but, just as importantly, picketers hoped their noise would disturb the work of apartheid’s diplomats inside the embassy. It clearly did, as embassy officials pressed the Metropolitan police to curb the picketer’s use of amplified sound during their office hours. The police tried many tactics to quieten the Non-Stop Picket, including charging them with noise pollution. The picketers stood their ground, refused to be intimidated and won, eventually. 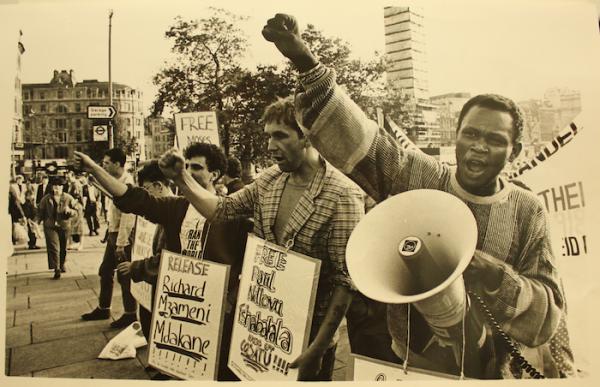 The actions of the embassy and the police, in attempting to limit the effectiveness of the Non-Stop Picket, made the mundane tools of anti-apartheid campaigning into disobedient objects. At the same time, the Non-Stop Picket took pleasure in being disobedient. In May 1987, in protest at the white-only general election in South Africa, three picketers redecorated the entrance to the embassy with a large volume of red paint. In response, the police banned protests directly in front of the embassy and the Picket was forced to relocate to the steps of nearby St. Martin-in-the-fields church.  That evening (and regularly over the next two months) picketers crossed Duncannon Street, stood in front of the embassy gates, and attempted to reinstate the Picket in their preferred site. On at least one occasion the open platform of a Routemaster bus delivered protestors to the embassy gates. After two months and 171 arrests, the picketers defeated the ban and the Non-Stop Picket returned to its chosen spot in Trafalgar Square. 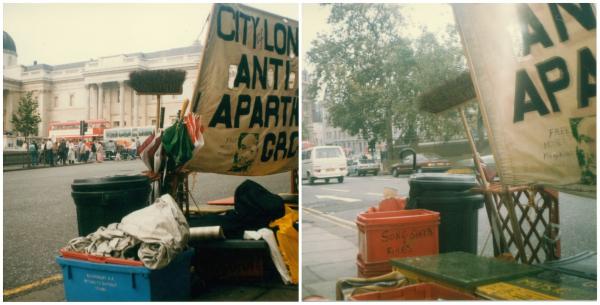 Compared to the edifice of South Africa House, the Non-Stop Picket remained flimsy and impermanent. And yet, it lasted for forty-six months. After the police ban had been defeated in July 1987, the Picket grew in confidence. Incrementally, new objects were put in place that made life easier for picketers and embodied their determination to stay put. Placards of various kinds were now not just worn, but used to adorn the pavement. A dustbin was added to collect donations. Improvisations were made to ensure that the banner became self-supporting. Three covered crates (painted in the black, green and gold colours of the African National Congress) sat beneath the banner. These became the storage boxes for all the fliers, petition boards, and spare batteries for the megaphone. Although the police still, officially, prevented picketers from sitting down, it was possible to snatch a quick rest by sitting on these sturdy crates. Each time they won a victory against the police, the infrastructure of the Non-Stop Picket expanded and was made disobedient in new ways – not just aiding the anti-apartheid cause, but testing the limits of the right to protest in London.

I’m almost entirely certain that the person second from the left, with head down and cigarette is me (I was there a great deal from 87-89 and the other people in the shot are very familiar, although names now elude me) – do you happen to know the name of the picketers?

Hi.I was in the tree with a banner when Nelson Mandela was released at the protest by Trafalgar square and I am trying to find a picture or pictures of the protest at that time.Can you help?

I regularly joined the picket on the way home from work. At that time there were many rough sleepers around Embankment tube station and a soup kitchen was often in evidence. The kitchen used to offer soup to the protesters – there was huge support for the protest – most of which went unreported. 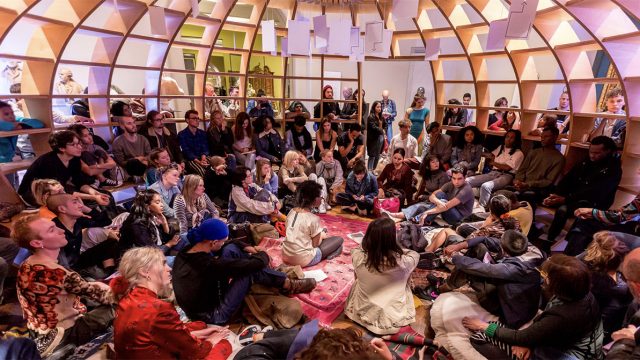