The evolution of print publishing around the end of the fifteenth century is closely intertwined with the development of ornament engravings and their role as designs for the decorative arts. The possibility of producing multiple impressions and the transportability of prints facilitated the wider distribution of these designs. However there are some works in the V&A collection that suggest printmakers were also aiming at a niche market of collectors through employing more expensive materials and techniques. 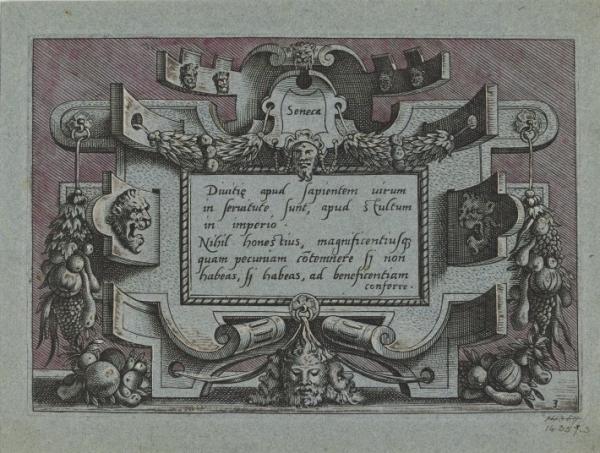 Cartouche with a quote from Seneca. Plate from a suite of 27 designs for cartouches with quotations from classical and other authors

Ornament engravings are found in some of the first collections of prints, which were formed in Europe during the sixteenth century. The presence of these works suggests that they were highly valued by early collectors, both for their designs and technical qualities.

Plate from set of 12 ornamental panels

One of the earliest documented collections is that of Ferdinand Columbus (1488-1539). The second son of the explorer Christopher Columbus, Ferdinand,  formed a large library in Seville which contained over 15,000 printed books and manuscripts and 3,200 prints. The prints collection demonstrates an eclectic taste ranging from religious to topical subjects, as well as including ornamental panels by Daniel Hopfer and Giovanni Antonio da Brescia (figure 2). 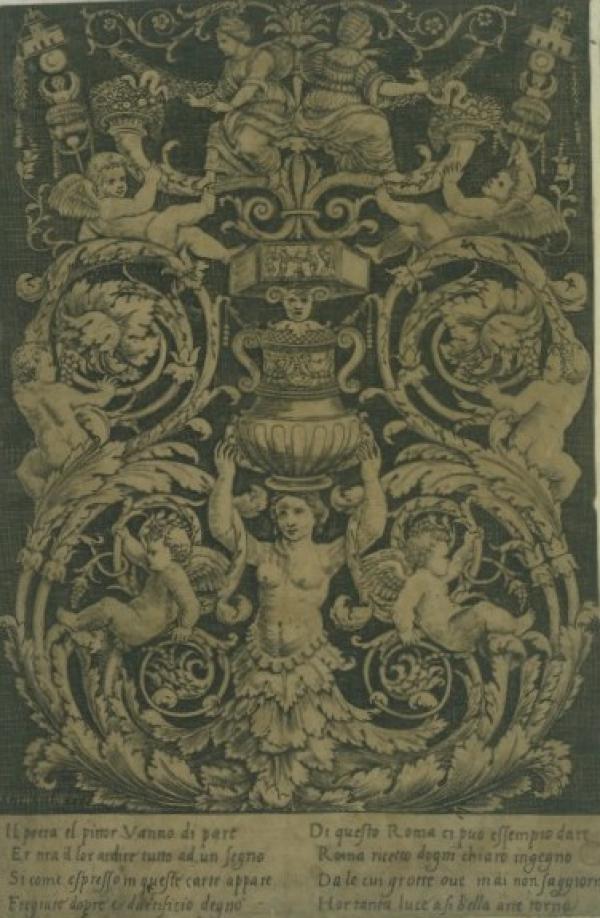 Master of the Die

Panel of ornament, female nude holding vase on her head

Two early collections that survive relatively intact are that of Archduke Ferdinand of Tyrol (1529-1595), housed at the Schloss Ambras, near Innsbruck, in Austria and that of his cousin King Philip II of Spain (1527-1598), housed in the Royal Library at El Escorial in Spain. The collection of Archduke Ferdinand of Tyrol is documented in an inventory made shortly after his death in 1596. No early documents survive relating to the collection at El Escorial, however it is believed to have been formed in the 1570s, probably under the guidance of the librarian of El Escorial Benito Aria Montano. In both cases engraved ornament is located at the end of the run of albums in which these collections were housed and categorised. The V&A collection of ornament engravings includes impressions of a number of prints held in these two early collections. 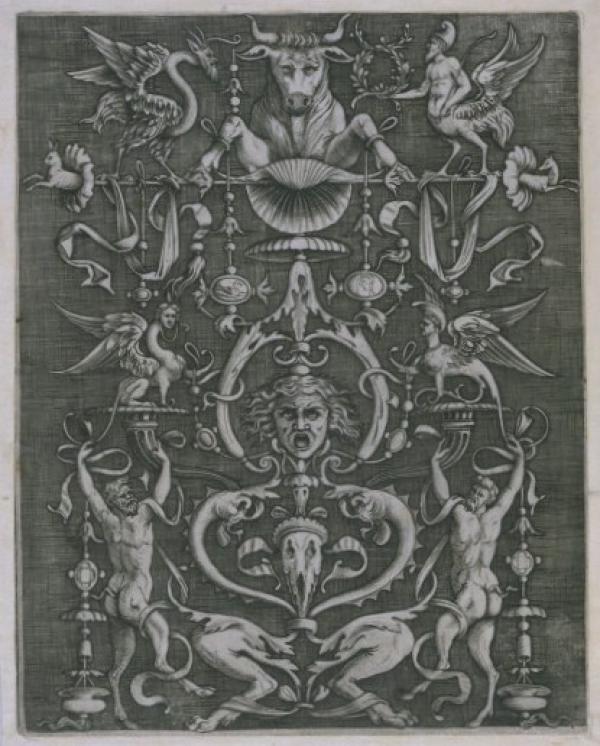 Within the collection at El Escorial there are a number of prints of grotesque designs by Italian printmakers, including 5 by the Master of the Die including (figure 3), 25 by Agostino Veneziano (figure 4), and 3 by Nicoletto da Modena.  Interestingly all the Italian Ornament prints in the collection at El Escorial were published in Rome and it is possible that Montano may have acquired these prints during his travels to the city in 1572 and 1575. 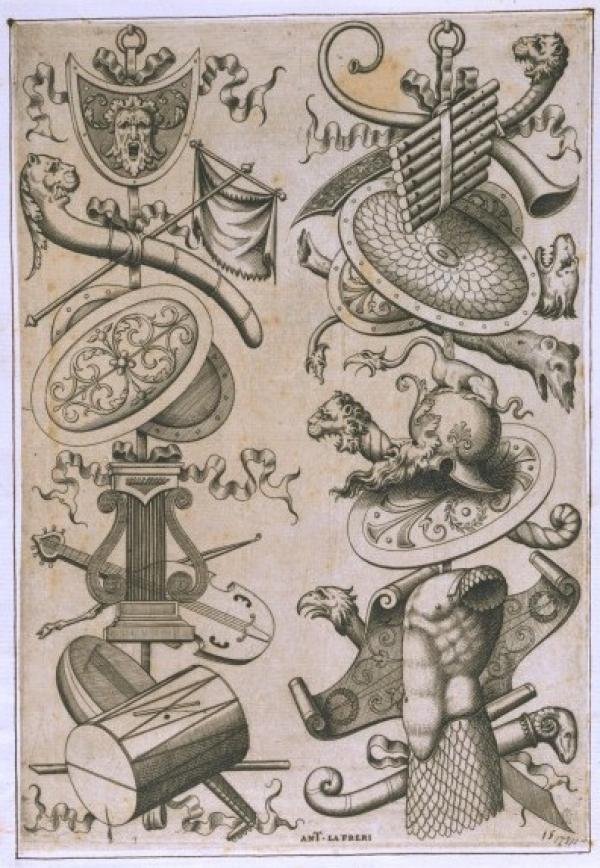 Plate from a suite of 16 military trophies, Published by Antonio Lafrery, Rome before 1553

Amongst the ornament prints listed in the inventory of the Archduke Ferdinand of Tyrol are some by Enea Vico (figure 5). These were kept in an album with ornament engravings by other printmakers entitled ‘Grodesche et Arabesche’. 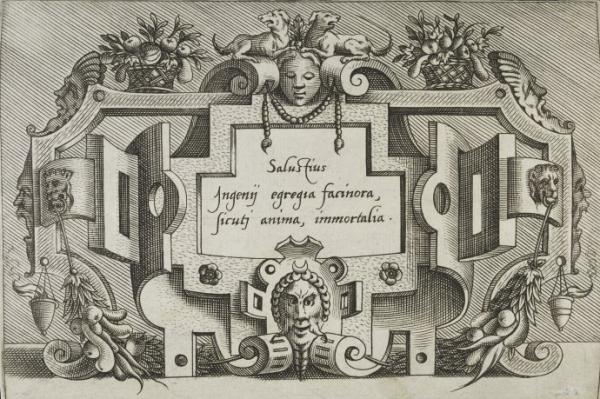 Also present in the collection of the Archduke Ferdinand of Tyrol is a suite of 27 cartouches with inscriptions from classical and other authors published in 1553 by Hieronymous Cock after Benedetto Battini (figure 6). These prints comprise cartouches formed from strapwork ornamented with masks and festoons of fruit following the style of the Fontainbleau School, first introduced in the decorations of the Chateau at Fontainbleau by Rosso Fiorentino in 1530. The design, incorporating quotes from authors in Latin suggests that ornament prints such as this suite were intended for an elite humanist audience which was familiar with classical texts. Within the V&A collection there is a very rare edition of these prints after Battini that strengthens the idea that Cock was aiming at a specific audience of collectors (figures 1, and 7). 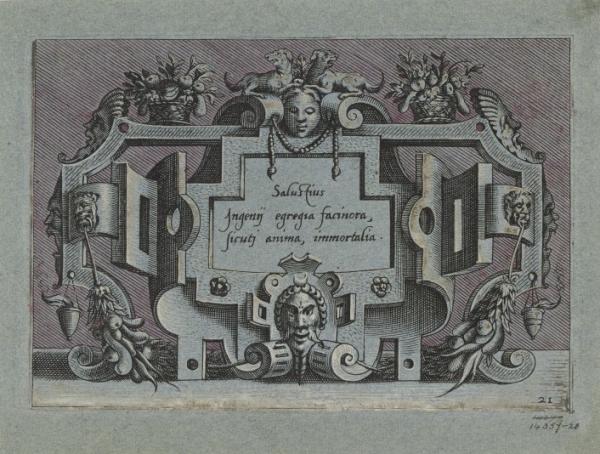 This edition of the Cock engravings has been printed on blue paper before being hand coloured in mauve and white.  Comparison with examples of the engravings printed on ordinary white or off-white paper demonstrates the delicacy with which these were coloured. The addition of mauve and white heightening effectively brings depth to the strapwork and ornamentation of these cartouches.

There are ornament prints on a variety of supports other than paper in the V&A collection. This suggests that other printmakers, besides Cock, were also experimenting with different media to appeal to the collectors market that was developing from the sixteenth century.

One such example is this print of medallions decorated with river gods by Janus Lutma II (figure 8). It is an example of a stipple or dotted manner print, which in this case involves both etching and engraving. This process was first developed by the Italian printmaker Giulio Campagnola in the early sixteenth century to create gradation of tone for his compositions. In the process of stipple engraving the design is first dotted through the etching ground of the plate. This is then bitten with acid before the pits are strengthened through using a burin directly onto the metal plate. In Lutma’s engraving the use of dotted lines creates a delicate design for goldsmith’s work. This is further complimented by the vellum support, the iridescent quality of which combines with the technique to create a jewel like image. 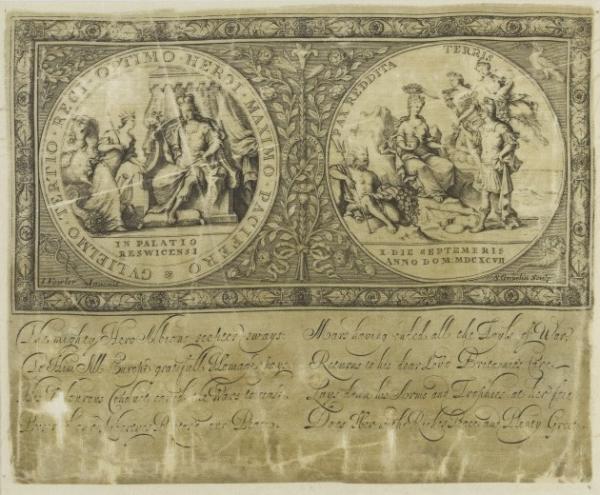 The Treaty of Ryswick, printed on silk

Printed at the end of the seventeenth century, Simon Gribelin’s two medallions showing William III and Mary II, commemorating the Treaty of Ryswick is printed on silk (figure 9). While most impressions were printed on paper at this time satin weave silk, a more luxurious material, was often chosen for more expensive presentation works. This engraving on silk by Gribelin consists of two medallions showing King William of Orange and Queen Mary. It commemorates the Treaty of Ryswick, signed in Rijswick in Holland on the 20th September 1697. The treaty settled the nine years war between France and the Grand Alliance of England, Spain, The Holy Roman Empire and the United Provinces. The commission of a presentation print on silk seems appropriate when considering the political significance of the subject represented.

Although primarily design objects to be used as models by craftsmen, ornament prints were quickly recognised for their technical quality and beauty by collectors throughout Europe. The combination of coloured paper and hand colouring in Cock’s cartouches after Battini and Lutma’s use of vellum shows printmakers responding to this growing demand for collector’s pieces. By the final years of the seventeenth century printmakers including Gribelin were using luxurious supports such as silk to create works that would have been commissioned as presentation prints, often made to commemorate important political events.