Antiquities have always had a strong allure for men and for artists in particular. From the very beginning of the 15th century artists began drawing ancient sculptures and ruins as well as historical events. 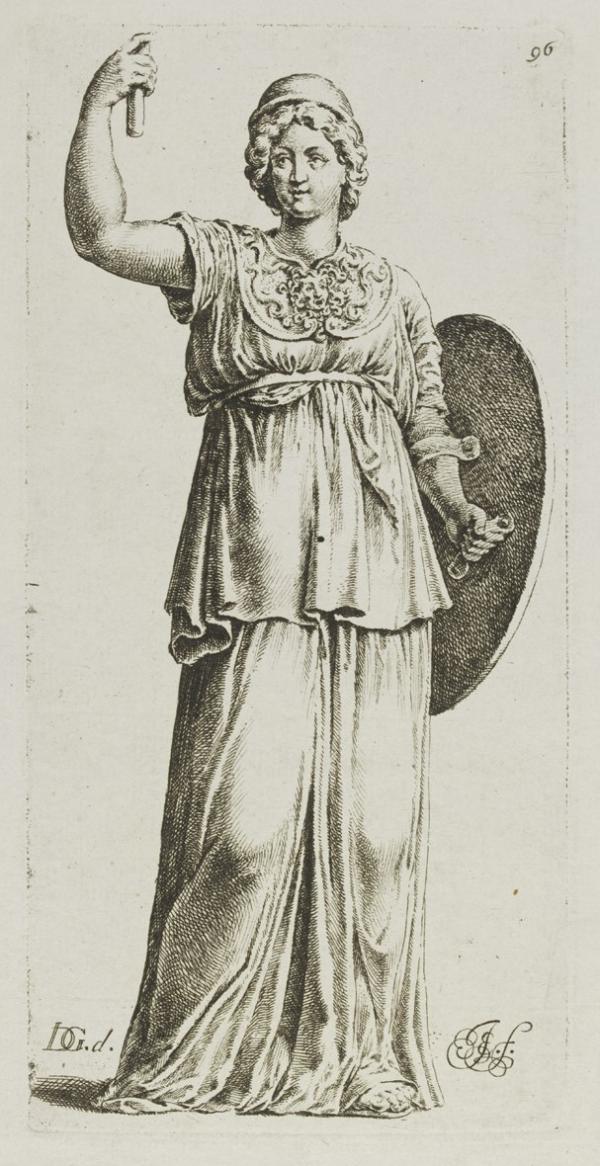 The Engraved Ornament collection has a number of prints of ancient sculptures. Among these are fourteen prints made by the Dutch printmaker Jan de Bisschop (1628-1671), also known as Johannes Episcopius. He first studied to be become a lawyer but then abandoned the profession in order to study art with Bartholomeus Breenbergh (1598 c.-1657 c.), a Dutch painter specialising in Italianate landscapes. In 1656 de Bisschop took part in the foundation of the Confrerie Pictura, a club of artists, in The Hague.

He was particularly interested in the teaching of art and this resulted in his making two series of prints based on classical statues and on sixteenth and seventeenth century artists for students to draw from. The first of these suites is the Signorum Veterum Icones which was published by Nicolaes Visscher in two parts in 1668 and 1669; the second suite is the Paradigmata Graphices variorum artificum, published in 1671. The two volumes of the Icones were subsequently published together with the Paradigmata, in one single edition. The Icones comprises of a suite of 100 plates of reproductive prints of sculptures, including a large number of well known statues from the Greek and Roman period. The second suite, the Paradigmata, consists of 57 reproductive plates of paintings and sculptures by Italian and Dutch sixteenth- and seventeenth-century artists.

The de Bisschop’s prints we are considering belong to the Signorum Veterum Icones. Some of these prints are after drawings by the Dutch draughtsman and painter Willelm Doudijns (1630-1697); others are after the drawings of the Dutch painter, Pieter Donker (1635-1668); there are also prints after sketches of a third draughtsman, the Dutch engraver Jacob de Gheyn III (1596-1641). One last group of prints seems not to have had any intermediary draughtsmen, being only signed with de Bisschop’s monogram. The statues represented in these prints were mainly housed in collections in Florence and Rome during the seventeenth century, and many of these works still remain in situ. Willelm Doudijns is thought to have spent twelve years in Italy between 1649 and 1661 when he is documented back in Holland. It would have been during his Italian period that he had the chance to study and draw these antiquities. Pieter Donker also travelled to Italy, while Jacob de Gheyn III probably did not.

The purpose of the Icones was for the instruction of young artists. During the 16th and 17th centuries, and not only, antique sculpture was considered a conditio sine qua non for the artistic career. Copying after earlier artists work and especially after the antique, which was regarded as the canon of beauty and perfection, was of prime importance in artistic training. As not everyone could afford to travel to Rome, a sort of El Dorado for anyone aspiring to become an artist, the prints provided a good surrogate and had a relevant role in the spread of models.

This group of prints from the Icones was acquired by the Museum at four different times: the V&A first acquired the print representing the so called Venus Medici, the statue of the goddess of beauty by one of Praxiteles’ followers. The draughtsman for this print was Pieter Donker who saw the statue in the Villa Medici at the Pincio, Rome, where it was housed until 1677. The statue is now part of the collections at the Uffizi, Florence.

The following group of three prints acquired by the V&A includes the Title page, the Dancing Faun and a Bacchus with a satyr.

The Allegory of Sculpture in the form of a sitting woman, partly draped, holding a statue in her hands is used for the title page. Actually it is the copy of the statue made by Battista Lorenzi del Cavaliere in the 1560s for the tomb of the great Renaissance artist Michelangelo in the Church of Santa Croce, Florence. It is the only print not realized on reverse and it is also one of a few prints which does not include the monogram of the draughtsman responsible for the drawing from which the print was produced. The choice of the statue from Michelangelo’s tomb and in particular that representing the Sculpture as Title page can not be a coincidence, especially when we consider that the Florentine artist always thought himself as a sculptor and not a painter. During his life time Michelangelo was regarded as a divine artist. Therefore choosing the statue of Sculpture, his favourite art, from the tomb of one of the most highly regarded artists makes an appropriate model for any aspiring artist, not only of works to copy but also of an artist to follow. 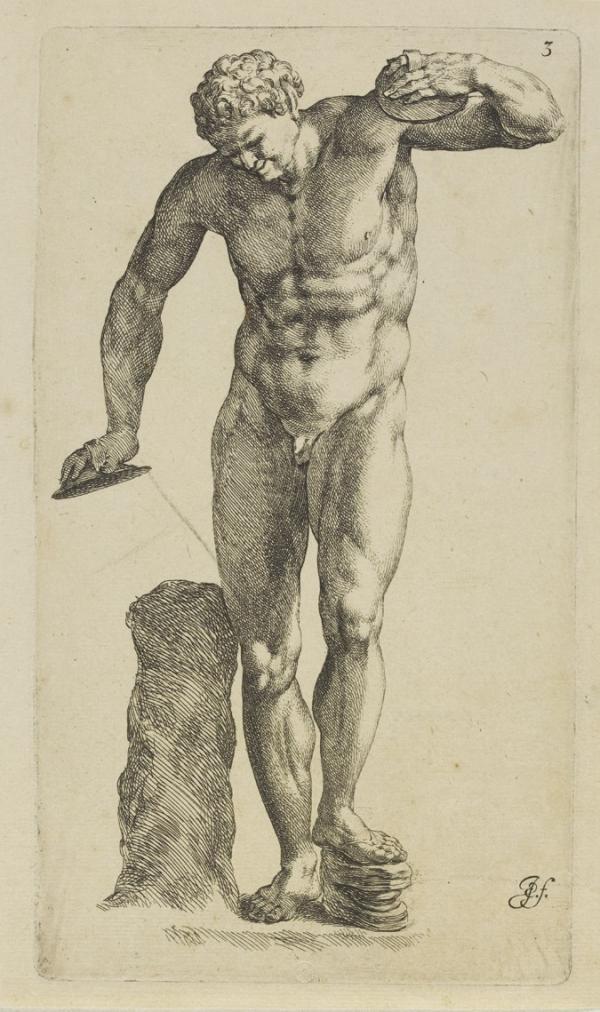 The second print of this group shows the Dancing Faun, also housed at the Uffizi. Unfortunately we do not know the designer for this print as it only shows de Bisschop’s monogram. It represents the Faun from a frontal view point with a particular focus on the muscle structure; allowing young artists to study the muscle tension in a moving body. 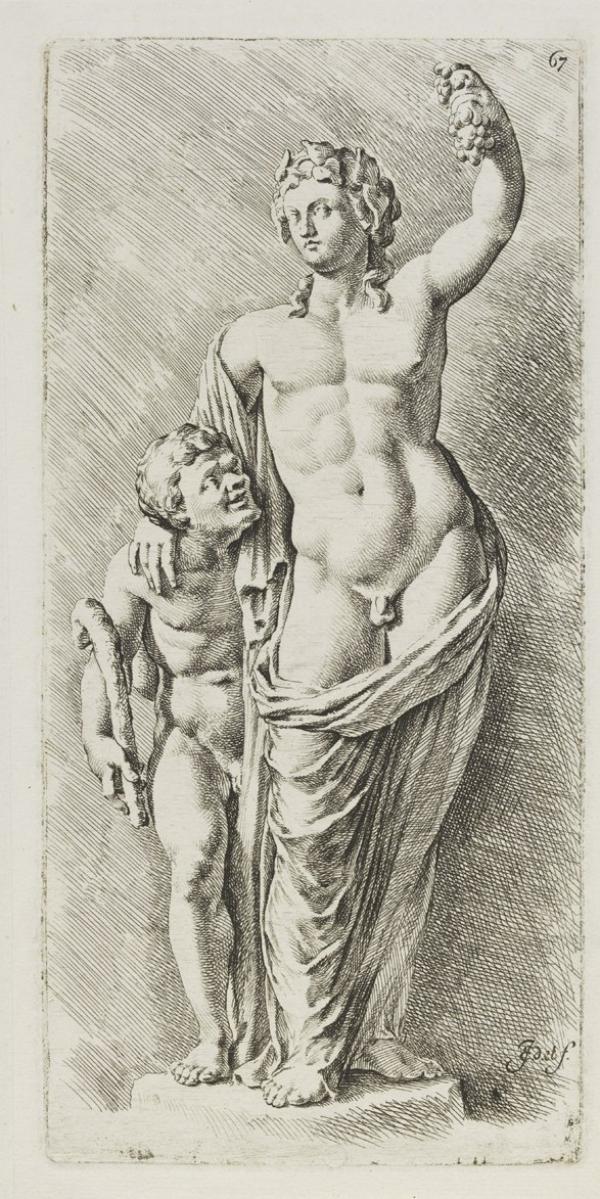 The third print of the group represents a sculpture which was already in Holland in the seventeenth century and is now at the Rijksmusum von Oudheden, Leiden. It consists of a group with Dionysus and a satyr. On the print de Bisschop is acknowledged as both designer and printmaker and it is likely that he saw the statue himself.

The third acquisition of the Museum was another print representing the same statue of Dionysus and a satyr . As with the previous print de Bisschop is acknowledged as designer and printmaker. 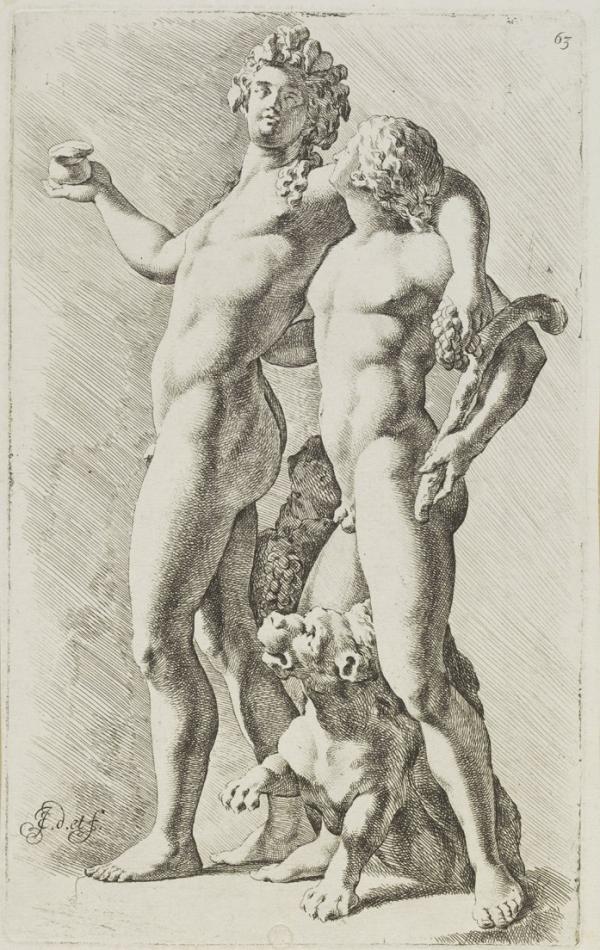 The last group of prints is the largest, consisting in nine etchings. Apart from three statues not yet identified, the rest of those represented were and still are in the Vatican’s collection or in the former Medici’s collection which now forms part of the Uffizi gallery. 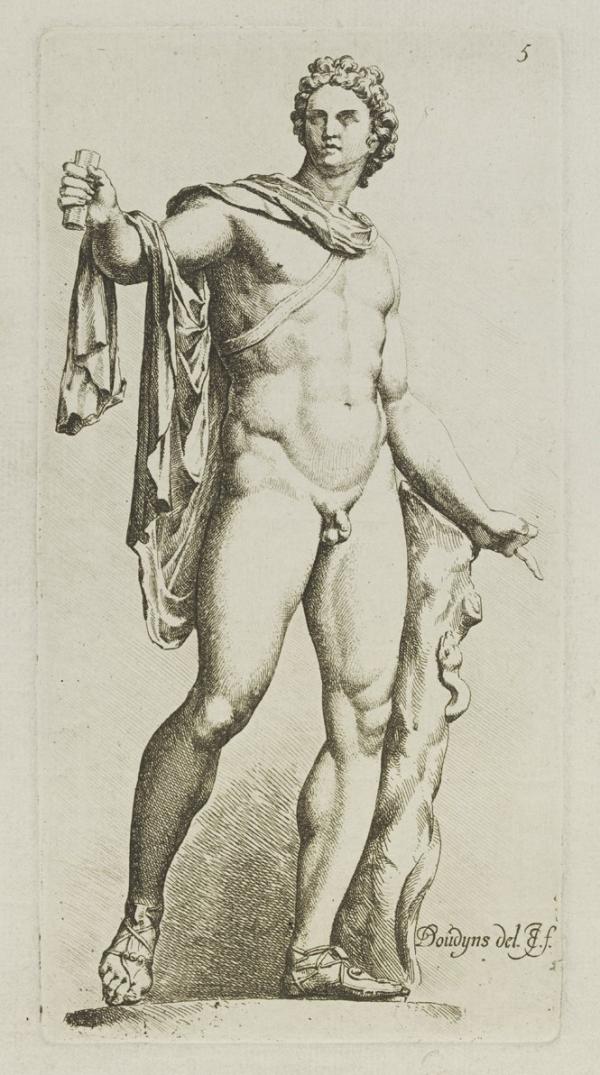 Two of the prints represent perhaps one of the most celebrated statues of antique art, the Apollo del Belvedere . Each print shows this work seen from a different viewpoint. There are other examples of prints in the Icones which represent statues from different viewpoints. It is always important to remember that the Icones was intended to be used as a teaching aid and by using two or more plates to represent these acclaimed statues from various viewpoints offered students a chance to see these works from different angles. 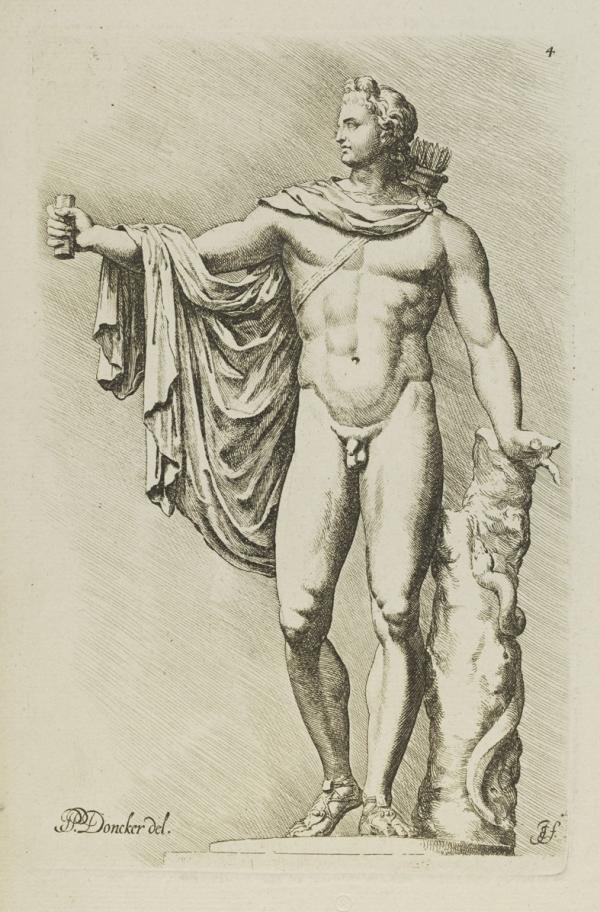 Among this group there are also two etchings of two statues of the Greek Goddess Athena  , although unfortunately both these sculptures remain to be identified. In the 17th century mythological subjects were popular within the arts and certainly studying the different prototypes of the ancient gods of the Olympus was essential for every young artist. Also, in the 17th century the prohibition for women to pose, meant that few artists could draw after life and often antique statues such as these of Athena provided the only female models.

Jan de Bisschop, Dionsyus with a satyr kneeling at his feet, Dutch, 1669

There is also another print representing the subject of Dionysus and a satyr ; this is of a sculpture which had been in the Medici collection since the sixteenth century and which is now at the Uffizi. In this particular case students could study a naked young body in the classical chiastic pose.

The study of figures from antique sculpture through drawing was a fundamental part in the training of young artists in the seventeenth century. The same poses as those found in classical sculpture could later be used for figures in paintings. Also sculptures might be represented in paintings to convey the distinction of the patron through their connoisseurship and knowledge of classical art.

De Bisschop’s etchings are also relevant from a historical point of view because they show many statues as they were in the second half of the 17th century. During the following centuries some of these sculptures changed their look due to restorations, making de Bisschop’s prints an important proof of their earlier appearance.

The most striking example is the Apollo del Belvedere, a highly important work in the history of art. In these prints the two different draughtsmen show it with the renaissance restorations, made by the Italian sculptor Giovanni Angelo Montorsoli (1507-1563). When the statue was found, at the end of the 15th century, both the hands were missing and a part of the right arm too. These were subsequently replaced by Montorsoli.

As a result of debates begun in the 19th century about whether mutilated ancient sculpture should be restored or not, it was decided in 1924 that the renaissance restoration of the Apollo Belvedere should be removed. Nevertheless the controversy has continued into the 21st century and, in 2001, the Apollo was restored again with the hands. De Bisschop’s prints, and subsequent prints of the Apollo Belvedere document the changes in this statue which has continued to be admired throughout the centuries.

Another print by de Bisschop records an opposite change in a statue. This is an engraving of the statue of Igea  housed at the Uffizi. In de Bisschop’s print both the arms of the statue are missing, however they are now in place.

These etchings exemplify the huge important that prints had in the past centuries: they were teaching tools, used to spread and supply models when living one was not possible to find.