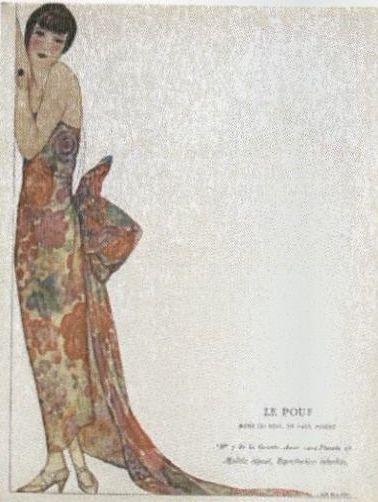 A brilliant, controversial designer, innovator and pioneer of fashion whose influence has been more fully appreciated since his death.

Not Alexander McQueen but French couturier Paul Poiret. Like McQueen he was seen as a maverick, confronting established fashion rules and unafraid to break away from traditional couture techniques.

He was one of the first designers to allow women to move away from corsets, introducing simple unstructured clothes that were easy to wear and comfortable. Until then women’s garments had been based on the same kind of intricate construction used for menswear, but he favoured plain rectangular pattern pieces and cylindrical shapes. Kimono jackets, harem pants and ‘lampshade’ tunics in vibrant colours with exotic accessories and embroidered slippers caught the mood of the wealthy women who wanted a bohemian look.

He pioneered the use of draping fabric, a common dressmaking technique now but radical in his time.

In 1911, publisher Lucien Vogel, challenged photographer Edward Steichen to try and turn fashion into a fine art. Steichen used some of Poiret’s dresses for the photographs and the results appeared in the April edition of Art et Decoration, the first ever fashion shoot and a blueprint for all that have followed.

Poiret’s method  of publicising his collections included throwing lavish themed parties for the glitterati of the day, one, ‘A thousand and second night’ was held in a garden full of coloured lamps, silken canopies,  trees covered with luminous purple fruit and large cushions where guests could lounge whilst eating exotic fruit drinking sherbet .

Always a flamboyant and stylish dresser himself, he was a familiar figure in pre-World War One Paris and famous throughout the world. In the USA he was known as ‘The King of Fashion’ and in France ‘Le Magnifique’ after Suleyman the Magnificent, because of his enthusiasm for the Ottoman Empire.

Like many modern designers he diversified, setting up a cosmetic business with two signature perfumes and a decorative arts company.

During the war he served as a tailor; this was largely due to an administrative error, because he couldn’t actually sew at all. Afterwards he returned to Paris to re-open his fashion house and resume designing the oriental style clothing which had been so successful. But tastes had begun to change, new designers like Chanel were producing sleek streamlined garments made to the highest possible specification. Poiret’s clothes, which were designed for immediate impact and to be seen from a distance, suddenly seemed tawdry and shoddily made.

After a few years, the business began to fail and closed altogether in 1929 when the remaining stock was sold off by weight as rags. Poiret never recovered his place in fashion and spent the rest of his life doing odd jobs and painting street scenes for tourists.

In his autobiography written in 1931, he reflects that “I have been the hearth of many things, or rather I should say, the fire that has lit up many hearths; but these hearths have now gone out or become choked with ash, as they have departed from me”.

When he died in 1944, there was little sign of mourning from his former starry clientele and his funds had dwindled to the point where it was left to his friend Elsa Schiaperelli had to pay for his burial.

Now, of course, he is represented in all the great costume collections in the world and regarded as one of the most influential figures in fashion and an inspiration for many modern designers.

What happened to these wonderful blogs? Will we hear more from Diane Spaul?